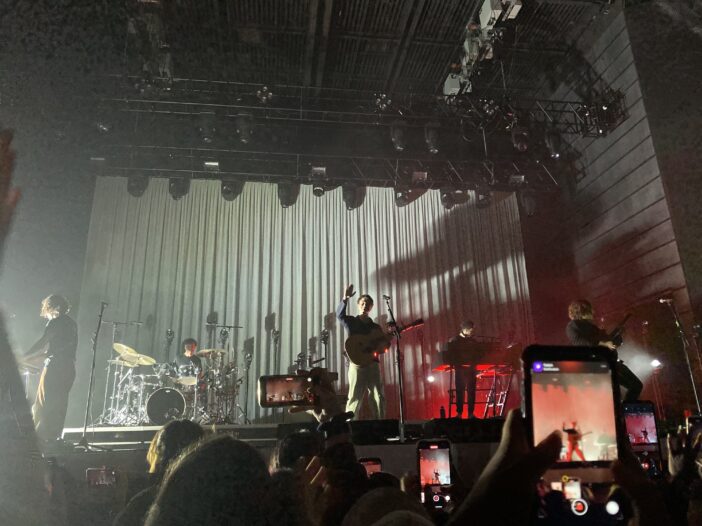 The incredibly charming boy next door has made his way back to Washington, D.C.

Less than a year after his last show at the 9:30 Club, Alec Benjamin celebrated his newest album, “(Un)Commentary,” at The Anthem Sept. 23, and showed his evolution as an artist and performer.

Although 28 years old, Benjamin has a youthful appearance that allows him to bond with fans of all ages. Benjamin does not have a unique stage name or a flashy persona, and instead chooses to present himself as authentically as possible. Half the people in line thought his name was Alex, not Alec, but as soon as he started to play, they were all dancing and singing along.

Benjamin had two opening acts, the first of which was Madeline the Person. Madeline came up on stage with a colorful street-style outfit and a multicolored, stickered guitar, setting a light tone for her set.

Madeline appeared nervous and frequently tugged at her sound equipment. However, she performed complex vocal strings from her own original songs, and the genuine smiles she gave the audience when she heard fans singing along outshined any stage fright.

Claire Rosinkranz followed Madeline, leaping onto the stage with boundless energy that she maintained throughout her half-hour performance. Famous for her hit song “Backyard Boy,” which was viral on TikTok in 2020, Rosinkranz already had many fans in the audience.

Rosinkranz twirled across stage with her iconic space bun hairstyle, showing incredible vocal stamina in the process. Compared to Madeline, Rosinkranz was a seasoned performer with perfectly coordinated movements and facial expressions throughout the show. While Rosinkranz was a tough act to follow, Benjamin delivered.

Benjamin opened his set with “Devil Doesn’t Bargain,” one of the most popular singles from his new album. Benjamin had previewed this song before its release during his show at the 9:30 Club last year, marking a full circle moment.

The audience gushed with excitement after the first song, and Benjamin maintained this energy by following it up with “If I Killed Someone For You,” a beloved song from his debut album.

Compared to last year, Benjamin appeared much more comfortable at The Anthem than the 9:30 Club. Rather than just standing in one spot with his guitar, he moved around with nonchalant, natural movements.

Benjamin was extremely comfortable with his band members, at times gesturing to them and conversing with them on stage. Their camaraderie transferred to the audience, especially when the band members signaled the crowd to start clapping or turn on their flashlights to engage with the songs.

During interludes, Benjamin shared memorable stories from his life. Before beginning “Shadow of Mine,” he explained that the song was written about failing to outrun his past. Later in the show, he shared a lighter, unrelated anecdote, joking about his frustration with a fifth-grade teacher who refused to accept “BBQ” as the correct spelling for barbecue in a competition.

One of the show’s special moments was when Benjamin sat at the piano and played “Paper Crown,” one of his first singles which was removed from Spotify after his contract with record label Columbia ended. After playing the song, Benjamin jokingly said that it was a mistake and asked fans to delete all their videos of the performance.

Despite the large venue, Benjamin and his band kept the show simple. Rather than incorporating impressive sets and visuals, they relied only on lights and the music. Benjamin glowed the most when it was just him and his acoustic guitar. This was most apparent in “Hill I Will Die On,” as the simplicity of the acoustic performance highlighted his vocal skills and the complexity of his lyrics.

In just under a year, Benjamin has made impressive strides both as a musician and performer. What’s next for the pop star? As the chorus of “Hammers” repeats, “Only time will show.”