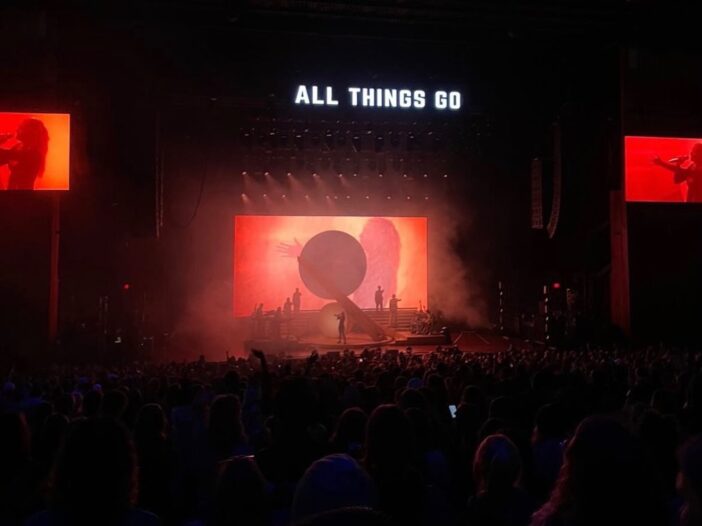 Tucked into a wooded area in Columbia, Maryland, the venue managed to accommodate 20,000 fans while still maintaining an intimate vibe. Fans arrived armed with ponchos and umbrellas to brave the rain for their favorite artists. While waiting for the bigger names, fans stood in excruciatingly long lines for their overpriced chicken tenders to hold them over.

Fans could easily walk to and from the two stages: the Pavilion and the Chrysalis.

On the other hand, the Chrysalis felt more like a modern art exhibition, literally resembling the hard outer casing of a larva during its metamorphosis into a moth or butterfly. Bright green and arch shaped, the stage was almost as entrancing as the artists performing on it. Peach Pit performed the heartbreaking “Shampoo Bottles” at the Chrysalis stage, which had the entire crowd singing along in unison.

One of the standout performances was given by folk-rock artist Lucy Dacus during her last song, “Night Shift.” The entire crowd sang along and the live screen alternated between her strumming her guitar and clips of the audience tearing up.

Indie-rock darling Mitski followed Dacus and enthralled the audience with her angsty hits. Wearing a ghost-like dress consisting of multiple layers of white fabric, she leaped, kicked, punched and even theatrically collapsed to the ground. Amplified by the commitment and intentions of her supporting musicians, Mitski delivered an unforgettable performance to all present.

The final performance from pop star Lorde did not disappoint. Her ethereal presence captivated the audience, especially as rain drizzled from the dark sky. Her stage consisted of a large ladder towering over a circular prop that emanated multicolored lights, resembling the sun, a nod to her most recent studio album “Solar Power.” Lorde traveled all over the stage, but she looked most magical standing on top of the ladder or in the sun-like enclosure where only her silhouette was illuminated.

She stopped periodically to chat with the audience and offer words of encouragement or past experiences. She jokingly mentioned swimming in the Potomac, referencing her recent blow-up on Twitter after mentioning the experience at a concert in Washington, D.C., earlier this fall.

Her words of encouragement struck deep, at least to a college-aged audience, and provided some much-needed inspiration. She spoke of feeling disillusioned about the future and how it is necessary to imagine there is a “little piece of grass” waiting for everyone somewhere in the future. She even got off the stage and walked through the front row of her cheering fans during the first half of the performance.

Lorde would follow her talks with the audience by performing absolutely gut-wrenching songs such as “Liability” and “Ribs.” During the performance of “Ribs,” she shared that she wrote the song when she was only 15 years old and invited the audience to reminisce back to their 15-year-old selves alongside her. Listening to her haunting voice while wrapped in layers of clothes to protect against the constant drizzle was a transformative experience and the perfect end to a long day.

Despite long lines, expensive food and dismal weather, the ticket price was more than worth it. In a way, the cloudiness of the day brought everyone in attendance closer together, bonding over their favorite artists despite the drawbacks. With performers pulling at heartstrings and creating indelible spectacles for the crowd, it’s safe to say that All Things Go was a roaring success.