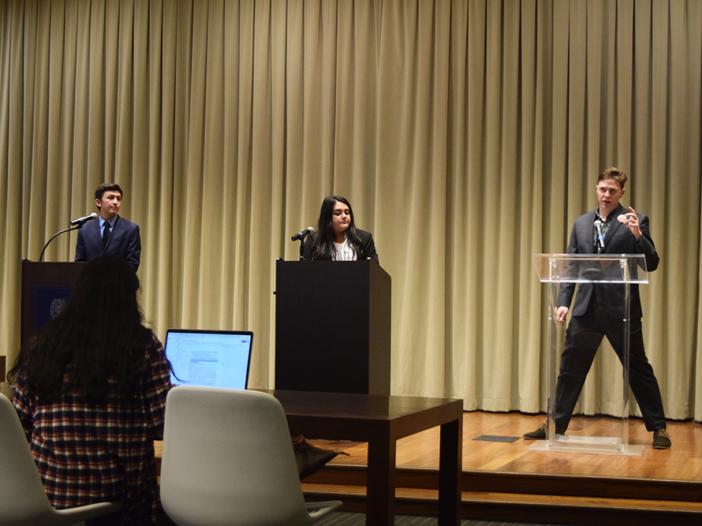 Students must vote in favor of university fossil fuel divestment to encourage Georgetown to take action in the fight against climate change, Ferretti said at the debate.

“We really want to make sure that we are pushing them to get this done, because the world is literally on fire. This is one of the biggest issues we’re facing right now,” Ferretti said. “We cannot be a university that claims to Jesuit values without divesting from fossil fuels.”

Divestment from fossil fuels and a Blue Campus designation would prompt the university to strive toward more responsible practices, Marin-Mora said.

“These are the best ways to hold true to its commitments to its sustainability approach. It is what is most consistent with our values, and it is the most ethical way to go forward with this,” Marin-Mora said. “Georgetown cannot afford to not be a leader in this movement. We cannot fall behind, for the good of the university but more importantly for the good of our students and our planet.”

Each presidential candidate also supported the Student Empowerment Fund referendum, which passed the GUSA Senate on Feb. 2,  for its capacity to give students more voice in future campus projects.

“I think it is a perfect investment for the long term,” Marin-Mora said.

All three tickets also expressed dissatisfaction with the university’s response to the GU272 referendum, the most recent referendum to be passed by the undergraduate student body. In April 2019, 66.1% of students voted “yes” in support of the GU272 referendum to establish a semesterly fee of $27.20 to benefit the descendants of the GU272, the 272 enslaved people sold by the Maryland Province of the Society of Jesus in 1838 to financially sustain the university.

Despite overwhelming student support for the referendum, University President John J. DeGioia (CAS ’79, GRD ’95) announced in November that the university would not enact a semesterly fee and would instead pursue other initiatives to support descendants.

If elected, Gonzalez Porras would collaborate with the GU272 advocacy team and press the university to take more steps to address the concerns of the descendant community, she said.

“I remember voting for the GU272 and realizing, wow, finally Georgetown is doing something that I’m proud of; I’m proud to be part of Georgetown. Unfortunately, that ended really quickly,” Gonzalez Porras said. “If we have to do civil disobedience, we’re here for it. Even if we don’t get elected, you know where to find me.”

Georgetown University Pride Co-President Siena Hohne (COL ’22) asked the candidates how they would encourage diversity and representation in the GUSA. GU Pride alongside other campus organizations released a Feb. 2 report card ranking the campaigns on their policies regarding issues concerning the LGBTQ community. The report card gave Ferretti’s campaign a 94%, Gonzalez Porras’ a 73% and Marin-Mora’s a 72%.

The diversity of Gonzalez Porras’ executive team would encourage students from underrepresented communities to run for office, she told attendees.

To encourage more diverse student representation in the GUSA Senate, Ferretti’s administration would prioritize conversations with students to encourage them to run, he said.

“I think a lot of times cisgender men feel much more entitled to these positions than any other group on campus, and so we really have to go out of our way and encourage every single person to run,” Ferretti said.

Marin-Mora agreed with Ferretti that the GUSA Executive should communicate with candidates considering running and helping navigate the senate if they are elected.

“More students just need to feel supported when they’re going out to run,” Marin-Mora said. “Rather than focusing on diversity, I think we have a lot of work to do regarding the inclusion factor as well and making sure that student voices are being heard.”

“I am sad of course that she won’t be on the ticket, but at the same time, mental health takes precedence over anything else,” Marin-Mora wrote in a statement to The Hoya.

The GUSA vice presidential debate will take place Feb. 4 in room 108 of the Intercultural Center at 8 p.m.