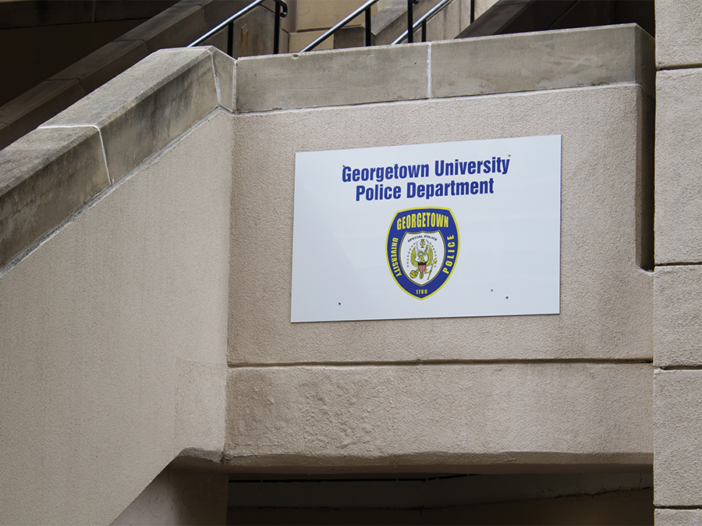 “An officer aggressively banged on the door and questioned what I was doing in there,” Francis said. “I didn’t do anything wrong. I showed them my GOCard and said that I was just working. That shit scared me.’’

Though being questioned by GUPD officers was not a new experience for Francis, he was still taken aback that, even as student body president, officers doubted his status as a student.

In private conversations with solidarity groups on campus, students of color at Georgetown University have discussed instances of hyperpolicing by GUPD. Rather than submit reports they doubt will be addressed, students share with these groups stories of being forced to provide proof of their relationship to Georgetown, being unnecessarily surveilled by the police and experiencing excessive use of force from the department.

Distrust in the System

Despite the discussed prevalence of these experiences, however, few reports of physical bias are actually filed.

Only one formal report against GUPD for bias-related incidents has been filed in the past five years, according to the Office of Institutional Diversity, Equity and Affirmative Action.

A total of 201 bias incident reports have been filed against individuals affiliated with Georgetown since 2014, according to IDEAA Director of Affirmative Action Programs Michael Smith.

The lone complaint against GUPD, which referred to an incident at the Climate Forum 2020 in September 2019, involved a person who was not a part of the Georgetown community.

Without formal documentation of an alleged bias-related incident, GUPD cannot address the issue, according to Chief of Police Jay Gruber.

To start a formal investigation into police misconduct, GUPD must receive a formal complaint with either first- or secondhand information. Students are able to file an official report with the department through the GUPD website, the LiveSafe app, the anonymous tip email or by contacting Gruber directly.

A lieutenant conducts the investigation, which includes typical detective work such as compiling evidence, including photos, talking to witnesses and collecting statements, according to Gruber.

After a review of the complaint is completed, GUPD will determine if they need to implement corrective action, which includes mandatory counseling sessions, coachings, written warnings, suspensions or terminations.

But some students, including Francis, have felt like reporting would not result in actual action, he said.

“I didn’t feel like it would do anything,” Francis said. “Whether it was when I was stopped on O Street or stopped in the GUSA office, I felt that reporting it wouldn’t really help. I did bring it up in some of my talks with admin and GUPD, and they say that I should’ve gotten the badge number or I should do it next time, but I don’t think to do that in these situations.”

Gruber acknowledged that many students may be afraid to file a report because of concerns about retaliation or fears of inaction but reiterated that the only way to see action is through a report. Still, the longer students wait to report, the more difficult it becomes to investigate, Gruber said.

Still, students have expressed frustrations about the reporting process and distrust in future results, according to GUSA Senate Speaker Juan Martinez (SFS ’20).

“When I’ve talked to students about reporting, they respond saying, ‘That doesn’t do anything,’ or, ‘I filed a bias report and nothing happened,’” Martinez said. “So people decide to go to The Hoya, where they feel like their story is actually going to be addressed, instead of typing their story into an online form and not hearing anything back.”

While only one official complaint has been filed against GUPD in the last five years, GUPD has also been accused of misconduct from within the department.

Former GUPD officer Gregory Ross initiated a civil action in the Superior Court of D.C. in 2018 accusing GUPD of engaging in discriminatory practices, which created a hostile work environment in violation of Title VII of the Civil Rights Act of 1964, as well as the D.C. Human Rights Act.

Ross accused his captain of engaging in racial profiling, specifically of black people, and of punishing him when he refused to engage in the practice, according to the court’s opinion. His superior, Captain Glenette Hilton, is still currently employed by the university.

“Plaintiff refused to participate in this practice, and he asserts that his refusal ‘has resulted in continued negative performance reviews and reprimands, creating a hostile work environment for him,’” the opinion read.

Ross refers to several incidents of discrimination in his lawsuit, including a time when he responded to a complaint targeting three young black men sitting outside an on-campus library.

“You knew what they were,”  Hilton said, according to Ross’s account in the memorandum. “You grew up in D.C. They should have been arrested.”

In June 2019, the judge found that Ross failed to file a complaint within the statute of limitations of Title VII and failed to prove that his allegations violated Title VII standards. The judge dismissed the claims of discrimination, retaliation and a hostile work environment.

As a result, the federal court lost jurisdiction over the lawsuit and the judge remanded the portion of the case concerning the D.C. Human Rights Act to a lower court.

Despite legal provision protecting employees against discrimination, the process of proving it can prevent many plaintiffs from finding redress, according to Sara Collina, an adjunct lecturer and attorney who teaches a class called “Gender and the Law.”

“Courts are always looking for ways to dismiss cases, and if someone hasn’t completed all the steps, that is an easy way to make the case go away,” Collina wrote in an email to The Hoya.

Before filing, many courts expect plaintiffs to have exhausted internal resources, such as a human resources department, and also expect adherence to a timeline that can be difficult for these types of cases.

“It takes time to identify insidious illegal discrimination,” Collina wrote. “But time is a problem. Complain too early and your claim may not be ‘enough;’ wait too long and you can run up against a statute of limitations.”

Gruber declined to comment on the lawsuit, as GUPD cannot provide personnel matters related to an employee. The department investigates every allegation of office misconduct and enforces punitive measures if necessary, according to Gruber.

Every year, all 72 officers and security persons affiliated with GUPD receive training about implicit bias in policing, according to Gruber. These in-person sessions are led by university staff members, including Vice President for Institutional Diversity and Equity Rosemary Kilkenny (LAW ’87) and Smith.

Officers meet for two to three hours to cover topics concerning implicit bias in policing. The most recent training from over the summer was titled “Bias and Beyond: The Georgetown Student of Color Experience.”

Because of the difficulties of coordinating in-person events for a department that operates all day, Gruber has also used GUPD’s online training system to train his officers on these issues.

“Usually every couple of months, when a good article comes out on implicit bias as it relates to police work, it’s put in our online training system, and our officers have to read it and take a short quiz,” Gruber said.

As official university responses leave unaddressed feelings of fear and frustration across Georgetown’s campus, however, students have organized to create Georgetown United Against Police Aggression, a group focusing on providing support to those who claim to have been racially profiled by the university police.

GUAPA actively educates students on campus through leading “Know Your Rights” trainings about policing, on- and off-campus resources and the bias reporting process.

GUAPA also called for GUPD to become more transparent with its policies, according to Sonia Adjroud (SFS ’20), a member of GUAPA.

“Unfortunately, we have seen in the past that Georgetown, because GUPD has not released their procedures and protocols, is always able to say that they followed university protocol and procedure,” Adjroud said. “That is just a very ambiguous blanket statement that I don’t even know what it refers to.”

GUAPA worked with IDEAA to correct these errors and hosted meetings with Georgetown administrators in which students could share their experiences of being discriminated against by officers, according to Adjroud.

Student organizations hope to push the administration to take further action by supplementing anecdotal evidence with quantitative data. GUSA and GUAPA have both advocated for including a section about experiences with on-campus policing in the upcoming Campus Climate Survey. Official data from the survey would allow students to feel more supported, according to Martinez.

“It will be a way to validate the personal experience of students because it is hard to build a case for change based on anecdotal stories, as people can dismiss it as an isolated incident,” Martinez said.