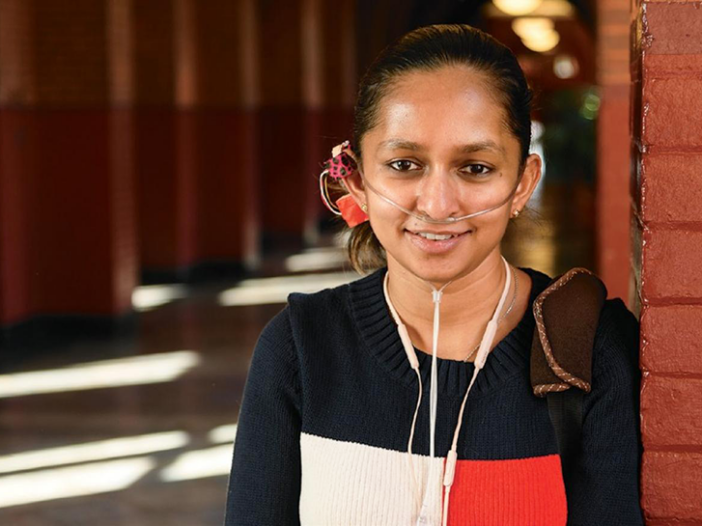 When Shavini Fernando (GRD ’18) developed a wearable oxygen monitor to live independently despite her life-threatening heart condition, she did not imagine two years later her invention would aid patients in a pandemic.

In 2015, when Fernando was living at home in Sri Lanka, doctors diagnosed her with Eisenmenger Syndrome, a congenital heart defect that, left undiagnosed for 33 years, had caused a hole to develop in the tissue separating the two sides of Fernando’s heart. Consequently, Fernando developed severe pulmonary hypertension, a condition in which oxygenated blood flows back into the lungs rather than out to the rest of the body. As a result, Fernando is at a high risk for silent hypoxia, which occurs when a patient’s oxygen levels drop dangerously low without visible symptoms.

“Because whoever sees me doesn’t think that I have such a deadly disease, I’m like a walking bomb,” Fernando said in an interview with The Hoya.

In 2018, while studying for her Master in Communications, Culture and Technology at Georgetown University, Fernando designed a prototype in the Maker Hub for what would become OxiWear, a wearable continuous oxygen monitor.

Because COVID-19 affects patients’ ability to breathe properly, patients are at a high risk for silent hypoxia. The OxiWear device would help hospitals diagnose the coronavirus early by detecting low oxygen levels. Ultimately, catching the virus early can alleviate the demand for hospital beds and ventilators, Fernando said.

“Now the hospitals really want me to work on this project,” she said. “And, also, for whoever gets treated, they don’t need to stay at the hospital just to be monitored. They can be sent home because doctors know they can monitor patients even while they’re home. If their numbers are falling, they can be called back in.”

Fernando still needs approval from the Food and Drug Administration to put OxiWear in hospitals on a large scale. For the FDA to consider her products, OxiWear needs to manufacture 10,000 devices and raise about $750,000 to qualify for the FDA emergency authorization process, funding the company does not have, according to Fernando.

In 2018, OxiWear won the Georgetown Bark Tank award for $35,000 dollars, part of an annual competition in which Georgetown students compete for up to $100,000 in an event hosted by Georgetown Entrepreneurs. In November 2019, when the money began to run out, Fernando said she turned to potential new investors to raise the money required to manufacture thousands of products months before demand shot up during COVID.

“We don’t want to slow down when we are really getting things started just because we don’t have the money,” she said.

Because investors withdrew their money when the pandemic began, Fernando launched a campaign to raise $50,000. As of Sept. 13, her campaign has acquired $10,301. When Fernando was first reaching out to investors to support the project, explaining what silent hypoxia is proved to be a challenge, she said.

“But now, with COVID, everyone who has COVID has silent hypoxia,” Fernando said. “So now everyone understands it, and so people are asking me, ‘when is your device going to be out?’”