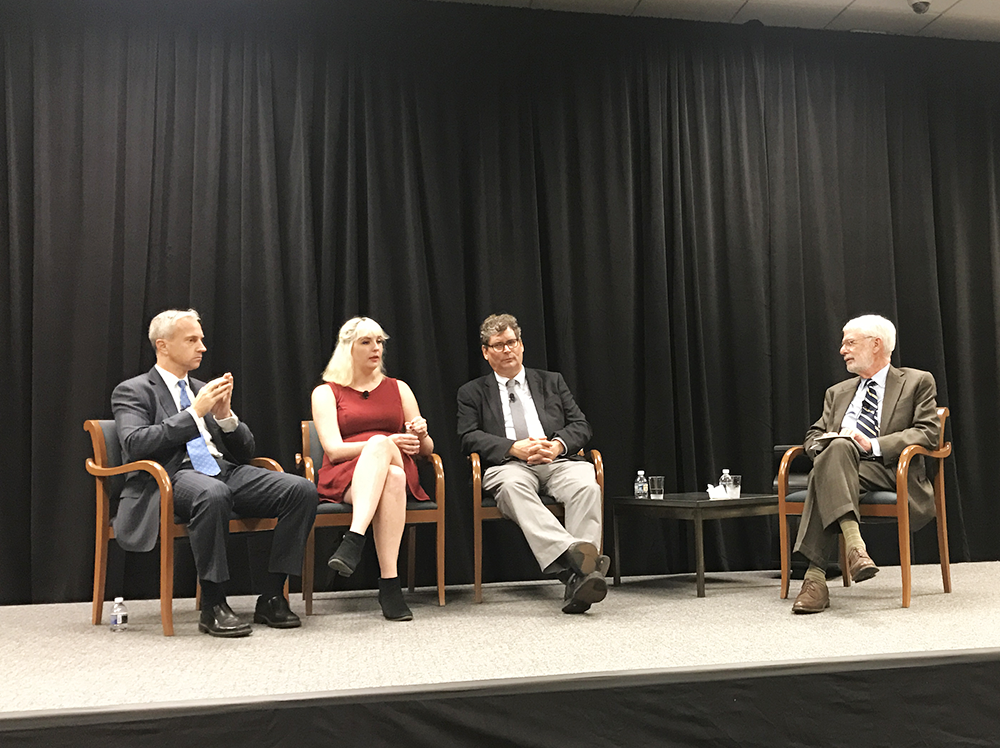 Georgetown alumni who have made careers in journalism and professional writing shared advice for aspiring journalists and their views on the current media landscape at an event by Georgetown Writes on Wednesday.

The event, hosted by Georgetown Writes in partnership with the Georgetown University Media Alliance and Hoyas in Letters, provided a forum for alumni who work in media and writing to share insights with the Georgetown community and offer advice to students seeking careers in these fields.

“There’s now a journalism program…there’s a creative writing minor,” Gilbert continued. “You have so many opportunities that so many young journalists didn’t have.”

The event was attended by three alumni accomplished in the media field: Russell Adams (COL ’98), an editor at the Wall Street Journal; Mark Bulik (SFS ’80), a senior editor at The New York Times; and Sarah Mimms (COL ’10), a deputy editor at Buzzfeed News. The panel was moderated by Georgetown professor Sanford Ungar.

This year’s panel focused on the topic of truth in media, an area the panelists regarded as critically important for media professionals and the public. Ungar particularly stressed the media’s current precarious situation.

Journalism is at “a new high in terms of threat, a new low in terms of awareness of how the media works in the United States,” Ungar said.

Much of the talk focused on the Trump administration’s aggressive stance toward the mainstream media.

“It’s alarming the way [President Trump] discusses the media and the First Amendment, but it’s not something I’m terribly concerned is going to be actionable,” Mimms said.

The panelists explained how the rhetoric of the president, who often refers to their publications as “failing” or “fake news,” can affect their work.

“We all see firsthand on a daily basis the grind and the pains that reporters and editors take to make sure every word is not only accurate, but that there’s no way we can be perceived as biased or unfair to anybody,” Adams said. “[When] you see the way the administration sort of lumps everybody into this big pile and tries to delegitimize everything that’s remotely critical, it’s hard not to be a little demoralized.”

The panel also stressed the difficulty of covering President Trump’s claims over the course of his campaign and presidency, noting they often questioned whether, and how, to label the president’s statements as false.

“It’s central to our mission to provide the kind of context that in this case, if he’s saying something that’s demonstrably untrue, to make that clear to the reader,” Bulik said. “We all wrestle with it. We have used the word ‘lie’ in a headline a couple of times; it was with deep consideration and decisions were made at the highest levels in the newsroom.”

The panel also addressed the role of their organizations in the rise of Trump’s popularity in national politics last election, an issue for which the news media has come under scrutiny following Trump’s win.

“Donald Trump is absolutely very good at playing the media,” Mimms said. However, she stressed that she “would be very hard pressed to say that because the media paid so much attention to him that sort of created him or turned him into a serious candidate.”

The Georgetown alumni stressed that they remain hopeful for the future of the media in the hands of a younger generation.

“There is a hunger out there for verifiable fact, we have seen our subscriptions rise,” Bulik said of The New York Times, a sentiment echoed by Adams regarding the Wall Street Journal’s subscriptions.