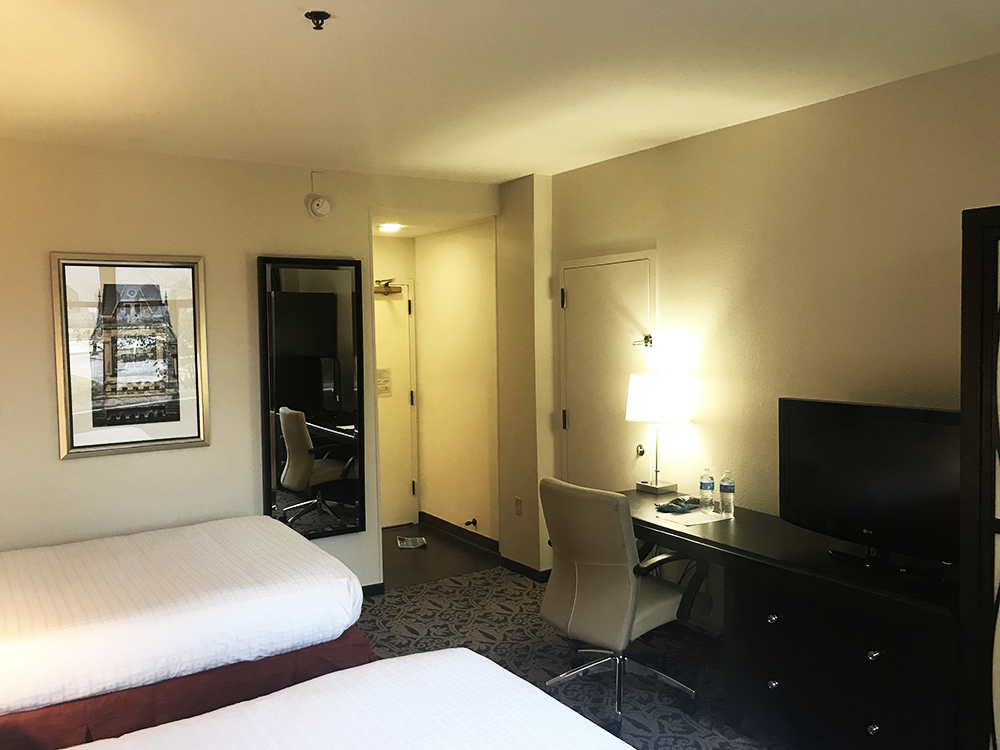 About 85 students are being relocated from their top-floor apartments in Alumni Square to the Georgetown Hotel and Conference Center this week after university administrators informed them about potential structural issues in their apartment roofs Monday morning.

The university decided to relocate students after a structural engineering firm conducted roof inspections last week because of concerns over moisture buildup and pressure on the roof in the case of snow or strong winds, according to a Monday email to all affected students from University Senior Vice President and Chief Operating Officer Geoffrey Chatas and Provost Robert Groves.

Although the students in the top floor apartments are facing no immediate concerns, they are being relocated as a precautionary measure to ensure their safety, according to Vice President for Facilities and Management Benjamin Kuo.

“Structural engineers identified that heavy loading on the roof, such as significant snow or extreme high wind events, may place pressure on the rafters,” Kuo wrote in an email to The Hoya. “Because of the unpredictability of future weather, we have decided to relocate these residents and begin repairs.”

Students must leave their dorms by 6 p.m. on Friday. Relocated students who do not receive scholarship aid for housing are set to be refunded housing credit for the spring semester, according to Monday’s email.

Students living on lower floors in Alumni Square are safe to remain in their apartments, according to Kuo.

“Structural engineers have confirmed that there are no structural concerns impacting the lower units,” Kuo wrote. “As repair work commences, we will make all reasonable efforts to ensure that the work is minimally disruptive to lower-level occupants.”

A separate email was sent Monday to Alumni Square residents living on lower floors informing them that roof inspections of their buildings will be conducted on a daily basis.

Facilities has also reviewed all other residence halls on campus and did not find any similar issues, according to Kuo.

Administrators informed students of initial roof inspections of their apartments in an email last fall. This earlier email did not mention the possibility of relocation in the spring.

Relocated students have been given the option to move off campus for the remainder of the semester, or can choose to move out of the hotel to off-campus housing at any point in the semester without needing to pay the university. This option is not feasible because of the short notice of the relocation, even if students do have the funds to afford off-campus housing, said Tim Coan (SFS ’20), an Alumni Square resident being relocated.

“They only gave us four days to find off-campus housing, which they should know is not realistic,” Coan said. “They didn’t have any answers as to why they are moving us out now and why they had waited so long.”

Coan, who studied abroad last semester, said he did not understand why the university would place students coming back from their semester abroad into housing that had already experienced issues in the past.

“The university will come to us and tell to us to our face that they really care about us as people, but when it comes down to it, they generally don’t really care about our housing situations, and they haven’t shown any signs of fixing that,” Coan said.

Following an information session and question and answer period held Monday, the university sent an email Tuesday extending the deadline for moving out by five hours and offering on-campus, long-term and mailing storage options the university will underwrite.

The university is also offering affected students the All Access 7 Meal Plan, the most expensive meal plan option, for free for the rest of the semester as well as an additional $200 in flex dollars. Students also have the option to convert this meal plan option entirely into flex, Stephanie Lynch, assistant dean of student affairs, said at the Monday session.

Jeremy Cohen (SFS ’20), who has lived in his top-floor Alumni Square since last fall, said the relocation speaks to a larger infrastructure issue on Georgetown’s campus, which has already caused many difficulties for students.

“The fact that this isn’t the sort of issue that can wait until the end of the semester shows the gravity of the infrastructure problems Georgetown has,” Cohen said. “Georgetown needs to do whatever it needs to do to keep people safe, but then ultimately they aren’t recognizing the degree to which the switch really negatively impacts the side of student life.”

Georgetown has faced an increasing number of housing problems in student residences over the past year. Facilities responded to 361 mold-related work requests in residences between August and October of last year, more than double the number reported during that time frame in 2017, and students in Darnall and Reynolds Halls reported malfunctioning elevators this past fall.

Students who receive scholarships or financial aid will not be receiving a housing credit following the relocation.

The university should be doing more for low-income students affected by the relocation, Olvera said.

“3.1 percent of the students come from the bottom 20 percent, and it’s ridiculous that the administration is not caring about this 3.1 percent, when we are students here at Georgetown,” Olvera said. “We are going to be working really hard to ensure that this is something that’s going to be addressed and that the university will be held accountable.”

Cohen agreed the university has underestimated the full burden of the relocation on students, financially or otherwise.

“I think the level of compensation that they’re giving is sort of the barebones financial side of it, whereas ultimately people aren’t paying for just the material housing, but paying for everything that comes with it,” Cohen said. “No one wants to be a junior or a senior living in what’s effectively worse than freshman housing.”

This article was updated Feb. 13.