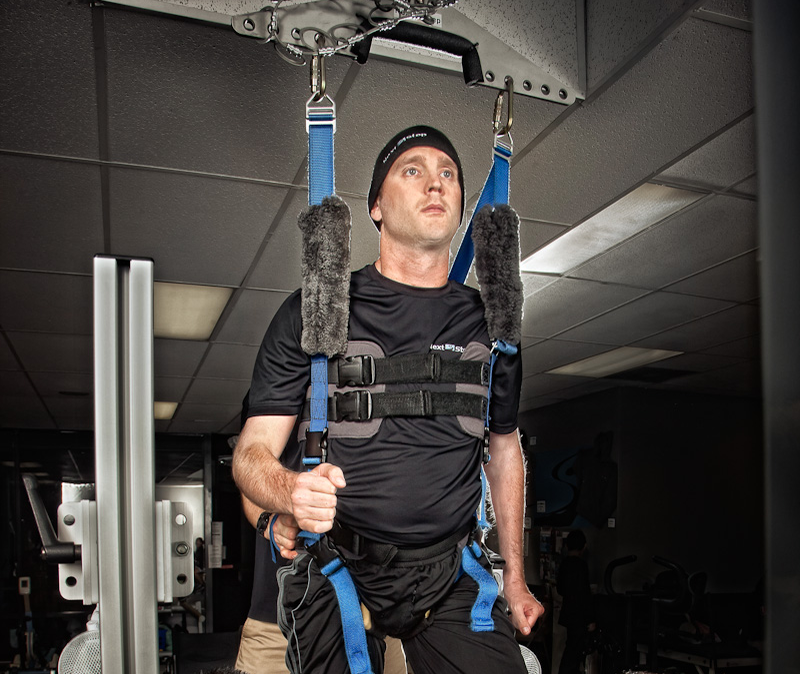 After overcoming paralysis despite doctors predicting recovery to be impossible, Janne Kouri (GSB ’97), celebrated ex-Georgetown football defensive tackle, not only triumphed over his affliction but is now working to help others with his nonprofit progressive rehab center, NextStep.

Offering services to anyone with paralysis as well as victims of brain injuries, multiple sclerosis and cerebral palsy, and wounded veterans, NextStep provides the necessary facilities that Kouri himself used on the path to recovery.

“For me, it was a simple decision. I experienced a traumatic situation but the question was, ‘Do I want to lead a happy life or not lead a happy life?’ I asked myself how I was going to get myself out of this situation and how can I have a wonderful life despite my disability,” Kouri said.

However, despite success in recovery, there were still problems during the process.

“Average insurance companies have plans that cover 30 days of rehab for paralysis victims.  After that the insurance plan drops you, and you no longer have access to continuous care.  People are stuck in their homes and it is extremely expensive to pay for private rehab,” Kouri said. “Insurance dropped me and I was kicked out of the hospital.”

Observing the lack of long-term continuous care for paralysis victims made it clear that a business like NextStep was needed. Kouri’s wife and sister created the business plan for NextStep, and after raising a million dollars in capital through large donations by Georgetown alumni, the company got off the ground.

“NextStep takes the best possible rehab for paralysis victims and puts it into a community setting. Our goal is to make our services as affordable as possible so that anyone and everyone that is suffering from paralysis can get the services they need.  We have everything that is offered at any progressive rehab hospital,” Kouri said.

Located in Los Angeles, the facility offers members the ability to work out and train their bodies to relearn movements and build muscle strength. Prominent among the available equipment is the locomotor training apparatus, a device that attaches a harness to someone afflicted with paralysis, allowing them to maintain an upward position weightlessly so that their nervous system can learn correct posture and the actions required to walk. However, access to this is limited to members who have a top-tier status with NextStep, which costs $1700 a month compared to the basic fee, which is $75 a month.

What separates the NextStep rehab facility from other, more conventional, hospital-based rehab facilities is the aspect of being comfortable. Rather than being stuck in a bleak, white linoleum-floored building, one can learn to overcome paralysis in a setting resembling a real gym.

While NextStep uses typical marketing practices, including social media, advertisements, speaking with other local rehab facilities and reaching out to other nonprofit organizations to spread awareness about NextStep, the main problem that the business faces is lack of awareness about paralysis as a whole.

“Lack of awareness is our biggest problem. People know about cancer and global hunger and AIDS, but people don’t know about the global issue of paralysis.The lack of information causes a lack of concern and people don’t understand the life-threating complications that can come with paralysis,” Kouri said. “Everyone knows someone living with paralysis. 1 out of 50 people in the U.S. suffer from paralysis. It’s staggering.”

However altruistic its mission, NextStep is suffering losses under its current model. With its two types of memberships, basic and top-tier, costing $75 and $1700 per month respectively, NextStep hemorrhages cash with each new member, as staff training costs coupled with subsidies of over 50 percent for membership fees pose inadequate finances of over half a million dollars every year.

In the future, Kouri plans to continue opening NextStep facilities across the country to provide the care needed for paralysis victims.

“We plan to expand to new communities and continue adding facilities over the next five years. Next year, we are opening a facility in New York at Stony Brook University, and then we are moving to Washington, D.C.,” Kouri said. “Our 10-year goal is to have a facility in every state across the country.”