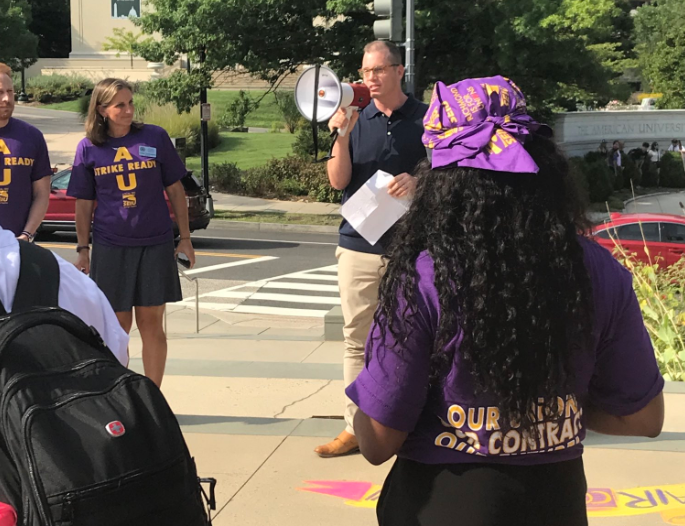 After a week-long strike involving over 600 American University (AU) employees, students and allies, administrators have reached a tentative contract agreement with staff, a first since the union’s formation.

The strike — led by the AU staff union — began Aug. 22 and ended Aug. 26 when the bargainers announced that administrators had reached a tentative agreement with union members.

Since then, the administration and staff have reached agreements which included a 4% salary raise for all staff, an increase in university contributions to health insurance benefits and the establishment of a joint-labor management committee that will devise standard protocols for disciplinary actions and more.

AU Staff Organizer Aubrey Hill said the atmosphere of the strike was one of excitement and determination but also some nerves. Several students joined the union walkout during new student convocation.

“Ultimately, this was not a violent action to hurt anyone. It would stress people out but real systemic change usually doesn’t happen in a comfortable way,” Hill said in an interview with The Hoya. “It was extremely necessary. We communicated with students and first-year advising offices beforehand so that they would know what would be going on.”

Samuel Sadow, press coordinator for the AU staff union, said the administration agreed to almost all their concerns.

“No contract is perfect but our strike and our refusal to work and our ability to bring critical aspects of campus to a halt, including freshman move-in, brought the administration to the table and allowed us to achieve meaningful movement towards our position on virtually every aspect,” Sadow said in an interview with The Hoya. “This includes increasing the length of the contract to two years, changing the low-wage approach, providing higher guaranteed raises and offering affordable health care and more.”

Sadow said the university has neglected the concerns of AU staffers in recent years, failing to reach proper compromises, delaying negotiations and even discriminating against unionized employees.

“In bargaining, it started to become clear sometime this spring that the discussion of wages and the economic condition of our working lives was not going to be easily solved,” Sadow said. “The catalyst was this summer, when they withheld raises from unionized employees, but not from other employees.”

The AU staff union has been mobilizing for community support and facilitating bargaining sessions with the university since its formation in November 2020. The union, a chapter of the Services Employees International Union Local 500 (SEIU Local 500) consists of 550 staff members in the AU provost’s division, including program coordinators, advisors, library workers, counselors, academic coaches, front desk staff, library staff, center for teaching and learning staff and financial aid staff.

Union members felt the university was neglecting employee input during the bargaining process, according to Hill, who said such conditions led to the strike.

“Their lack of understanding or willingness to confront power as a key component of our conversation was really disheartening a lot of times,” Hill said in an interview with the Hoya. “We wanted to show the university that we were an increasing force to be reckoned with. We eventually started to take some disruptive movements — marching through buildings on campus and such. Soon, the only way to get them to budge was to strike.”

Previously, the union has had targeted conversations with staff, hosted bargaining meetings with the administration and raised awareness about their cause through public campaigns, but none came to fruition.

AU Vice President and Chief Communications Officer Matthew Bennett said the university is devoted to maintaining an equitable environment for all workers.

“Our focus, as it has been, is on our people,” Bennett wrote to the Hoya. “We look forward to implementing the agreements and our overall budget framework, which includes enhanced compensation for our faculty and staff.”

While many staffers feel that their work is not yet complete, Sadow said the union still sees this as a “transformative victory” not just for AU but for higher education institutions across the nation.

“We were aware that we weren’t just bargaining for ourselves, but for the common good for all higher education workers,” Sadow said. “This should send a signal that if you want it you can get it, and through collective action and hard work, you can organize yourself and you can win major gains.”