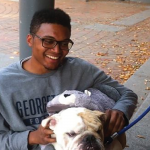 My dog died recently. She was an almost two-year-old Yorkie that somehow managed to find herself stuck in a Georgetown townhouse with four rowdy football players. Her name was Princess.

Princess was no ordinary dog, she had special powers. Princess had the ability to cheer you up when you were down.  She was able to fit into tiny places I couldn’t reach when she knew she had done something wrong.  Princess had super speed and a bark that could wake everyone on the block at 6 in the morning.  But the power that trumped them all was that Princess was born without fear.

I can remember times when I would walk her and have to pull her away from a dog that was even bigger than me because she wanted to pick a fight. Or how when she jumped off the top step, she would always fall on her face, but she would always get back up.  Princess was fearless. To her, life wasn’t about taking risk, it was about living as if the best possible outcome would always occur no matter what.

In Princess’ case, it was this way of thinking that led to her ultimate downfall, as she ran out into the street during rush hour. But do you think she had any regrets as she lay in my arms during her last moments? I don’t think so. She spent her last moments in life having made a decision and sticking with it. She was willing to live, or die, with the consequences, whatever they might be.

Even though Princess was a dog, I admire her spirit. She inspired me in the way that she lived. I can only hope to live being able to stand by every decision I ever make. I can only hope to die without any regrets in my heart. She died trying to chase a dog across the street. While I hope that my destiny will have more meaning to the world, the lesson still remains true.

I am sad right now I must admit, as I sit here next to a fire and the makeshift grave my roommates and I made for her. Yet, I believe that everything happens for a reason, and so should you.

As I sit out here reflecting, I thought about a speech given by Jim Carrey. In this speech he tells the story of his father and how he never pursued his passion of being a comedian. He talks about how his father became an accountant because it was considered a safe job. Years later he was let go from that “safe” job and ended up in the same position as where he started. The moral of that story was that “you can fail at what you don’t want, so you might as well take a chance at doing what you love.”

Last weekend I too had the opportunity to give a speech at the Georgetown TEDx conference. My talk was about looking at the hand that you are dealt and deciding whether to give up or to play out the hand.  In my life, sometimes I get really terrible hands like today, but I always believe that I can still win.

Yes, Princess is no longer with me here on earth, but I want to believe that the short life she lived was purposeful in the sense that it played a role: her job was to show me that life is short, so why sweat the small things? Run out there sometime and risk failing. But don’t be afraid to run out there and risk succeeding.

I leave you on this note. I beg of you to love living life. Embrace running, jumping, screaming, crying, falling and living all in the same way. Experience them all with the same passion, knowing that they are equally helping to shape the person that you are becoming. Have no limits on what you can accomplish in this life because you are indeed fearless like Princess. All I ask, though, is that you look both ways before crossing the street.

Darius Baxter is a senior in the College.