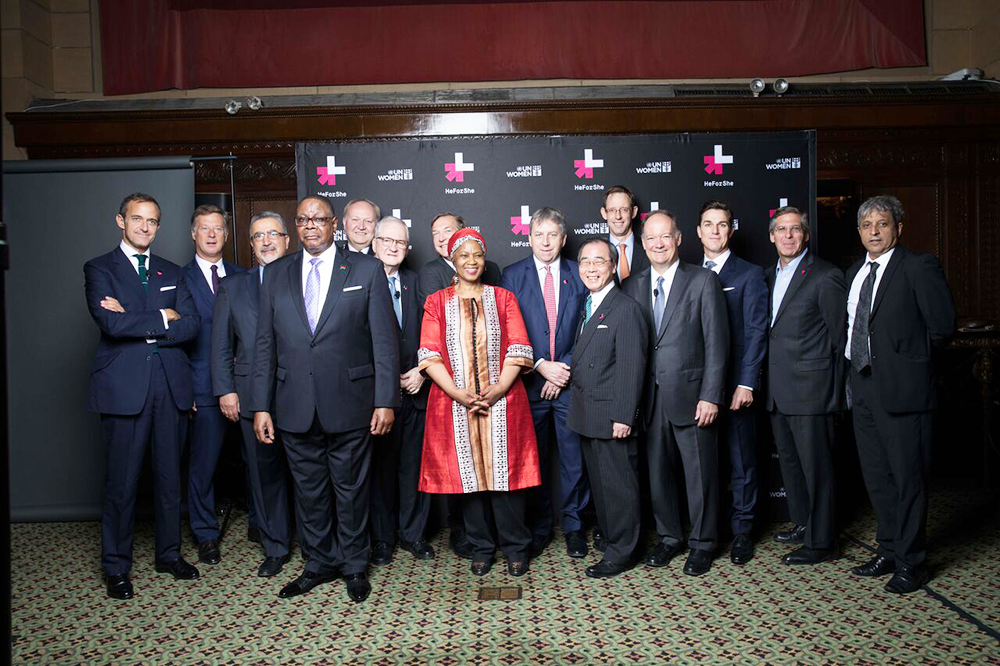 Universities can learn from Georgetown’s initiatives to empower women, such as sexual assault awareness and prevention programs, as well as the Institute for Women, Peace and Security, explained university president John J. DeGioia at a United Nations Women event Wednesday morning.

HeForShe is a global initiative launched by UN Women in 2014 to research best practices, implement policy changes to empower women and engage men and boys as allies in gender equity.

DeGioia is one of two U.S. university presidents who were named IMPACT champions in 2016, while Georgetown and Stony Brook University in New York are the two American universities researching and testing gender equity policies on their campuses.

Speaking on the sidelines of the 2017 United Nations General Assembly, he shared the stage with Vittorio Colao, CEO of the Vodafone Group, and moderator Susanna Schrobsdorff, columnist and Chief Strategic Partnerships Editor for TIME.

The 2017 report, released Wednesday morning, commended Georgetown for its efforts to also counter gender-based violence on its own campus through sexual assault prevention and healthy relationship education programs, specifically, the “Bringing in the Bystander” program for first-year students.

“Sexual assault is not an issue that can be tackled solely with a top-down approach,” the report reads. “We need to engage all members of our community in order to understand the full scope of the problem and work towards solutions.”

The Georgetown Institute for Women, Peace and Security — the founding of which was inspired by former President Barack Obama’s 2011 executive order mandating women representation in all U.S. negotiating teams — is collaborating closely with the Norway-based Oslo Center, a think tank dedicated to advancing world peace, human rights and inter-religious dialogue, to rank countries based on their female population’s contribution to national stability.

“We’re developing a global index,” DeGioia said. “We’re working together with the Norwegian government, with the Oslo Center, with support of the government of Norway, to develop an index that will enable us to rank nations in the contribution that women are making to ensuring peace and security in their nations.”

This project represents GIWPS’ most recent effort to promote the inclusion of women in security efforts, DeGioia said.

“We’ve been able to do case studies in Northern Ireland, in Tunisia, in the Philippines, most recently in Colombia. [There is] irrefutable proof of the significant role women must play in peacebuilding,” DeGioia said. “We are establishing the case for the role of women in peacebuilding and in security.”

“We will be able to achieve goals that we could not imagine if we just try to do it in an exclusive way,” DeGioia said. “The more inclusive we can be, the more diversity we can celebrate, the more women are central and connected to everything that we do, the more success we will have.”