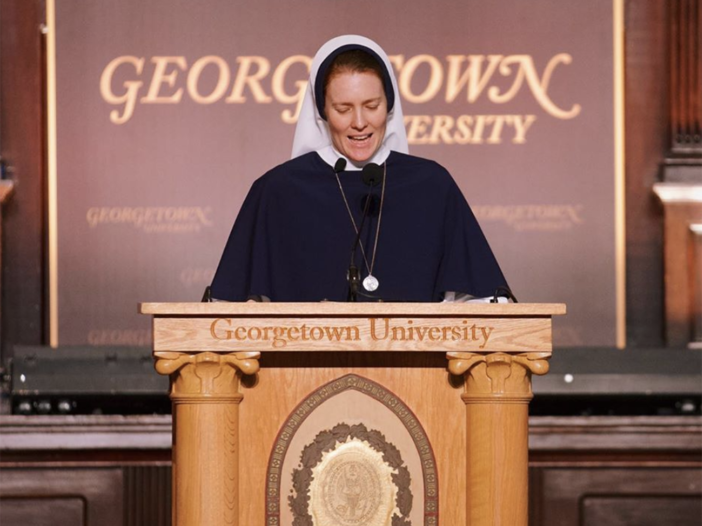 As students protested outside Healy Hall, speakers at the 21st annual Cardinal O’Connor Conference on Life discussed the intersection of law, morality and human dignity within the anti-abortion argument Jan. 25.

The theme of this year’s conference, “The Consistent Life Ethic and the Law: the Ethical Argument for Life,” focused on the rise of the anti-abortion movement, especially given the recent passage of anti-abortion laws on the state level and themes of public morality and human dignity. COCC has historically drawn student criticism. This year’s protests began Jan. 23 when student activists chalked messages in Red Square opposing the event.

Although fighting for anti-abortion causes may become tiresome, people must seek to develop a society that protects and cherishes all life, according to one of COCC’s keynote speakers Jonathan Reyes.

“There’s can be something romantic about finding a cause, falling in love with it. Caring for people. But romanticism about caring for the elderly, caring for the poor, caring for the unborn, caring for mothers, it will wear off,” he said. “Build a culture of life. Give everything you have for it. Not just because the culture needs you but because you need it. Let’s change the conversation that all may know they have an inherent dignity.”

Reyes serves as the executive director for the Department of Justice, Peace and Human Development and the assistant general secretary for integral human development at the United States Conference of Catholic Bishops. The second keynote speaker at COCC was Bethany Madonna, vocation director for Sisters of Life, a Catholic religious community of women dedicated to promoting anti-abortion causes.

COCC, which was originally founded by Georgetown University students in 2000, convenes students, clergy and activists from around the country to engage in discourse over a variety of anti-abortion topics, according to the COCC website.

The pro-abortion rights argument’s emphasis on attaining greater dignity for all human beings is applicable to women who choose to get abortions, according to Madonna.

“We see in their hearts the sorrow, the pain, the shame, the guilt, the depression, the anxiety, the anger,” Madonna said. “Jesus comes. Jesus comes, and his mercy has real power to make them new, to restore innocence.”

Following the keynote addresses, the recipient for the Rev. Thomas King, S.J. Award was announced. The award, which was granted to two groups the University of St. Thomas Celts for Life this year, recognizes collegiate anti-abortion groups. The all-day conference also featured a panel discussion on the theme of consistent life ethic and the law later in the afternoon.

H*yas for Choice, an unrecognized pro-abortion rights student group on campus, organized a protest in Healey Circle on the morning of COCC. The protest was supported by the Georgetown University College Democrats and GU Pride.

The purpose of the protest was to raise awareness about the harmful beliefs propagated by COCC and to demand that the university end its support of COCC, according to HFC President Talia Parker (COL ’20).

“We’re out here today because we don’t believe in anything the Cardinal O’Connor conference stands for, and we think it’s crazy that Georgetown funds and supports this and that administrators come to this,” Parker said. “We’re out here to show that this conference actively makes students on campus feel unsafe and that Georgetown should not be supporting this in any way. Ultimately, we want this conference to be gone from this school forever.”

Cardinal John O’Connor (GRD ’70) has faced criticism for his condemnations of the LGBTQ community. He supported the prohibition of LGBTQ Catholics from the property of the Diocese of Brooklyn and opposed the 1986 passage of a New York City bill that would have banned discrimination on the basis of sexual orientation, according to The New York Times.

Continuing to host an event in the namesake of a person who held anti-LGBTQ beliefs tarnishes the work student activists have done to promote inclusion on campus, according to GU Pride Co-President Siena Hohne (COL ’22).

“The Cardinal O’Connor Conference for Life has no place at Georgetown University, where we have worked tirelessly to foster an environment that is not only accepting, but celebratory of the LGBTQ+ community,” Hohne said.

Many OCC organizers and attendees were shocked by the heated nature of the protest against OCC, according to OCC Press Coordinator Sam Dubke (SFS ’21).

“We object to the particularly vitriolic rhetoric used by protestors this year,” Dubke wrote. “It was particularly shocking to watch our Georgetown peers shout slogans like ‘f**k the Church’ at students and nuns as they attempted to enter our conference.We hope that, in the future, we can engage in more respectful dialogue with our fellow Hoyas.”

This article has been updated to correct Cardinal O’Connor Conference’s abbreviation.