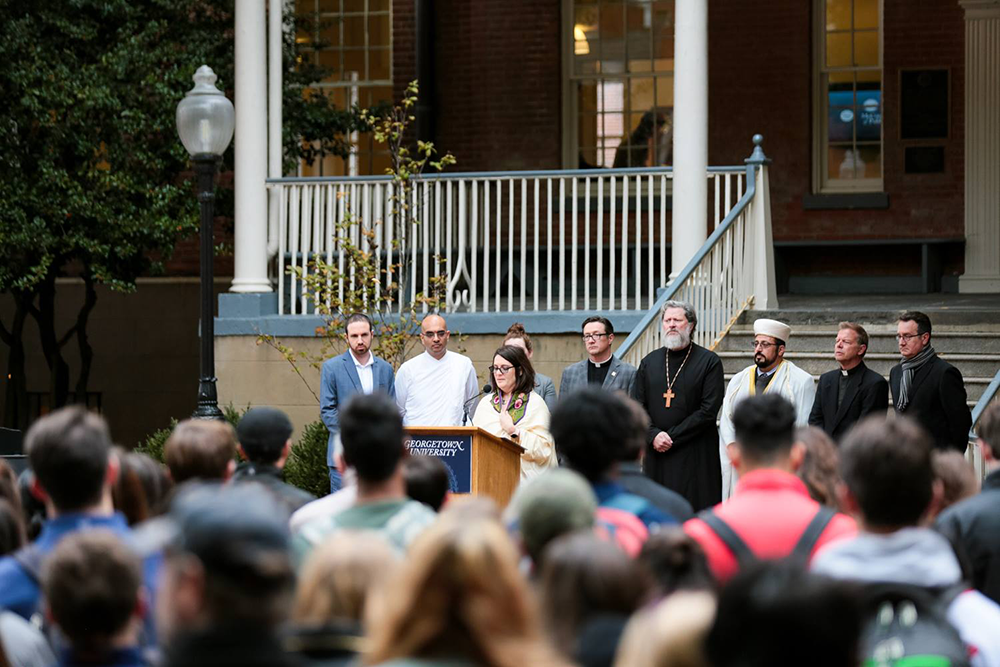 Georgetown’s Jewish community and its allies are calling for action against antisemitism in the wake of Saturday’s mass shooting at the Tree of Life Synagogue in Pittsburgh.

Robert Bowers entered the Tree of Life synagogue with an assault rifle and three handguns, killing 11 and injuring nine on the morning of Oct. 27. Bowers has since pleaded not guilty to the 44 counts a grand jury indicted him of on Wednesday.

The shooting marks the deadliest attack on the Jewish community in the United States, according to The Washington Post.

The Georgetown University Office of Campus Ministry held an interfaith service of mourning and solidarity in Dahlgren Quad on Monday afternoon. Community members grieved those who died on Saturday but also encouraged renewed activism against antisemitism.

Paige Harouse (COL ’19), who works for the Office of Campus Ministry, said that while solidarity is important, it is not enough.

“Every day of the year, we, as Jews or as allies, must act,” Harouse said. “Call out the antisemitism of your family, your friends, your ‘groups.’ Don’t talk about the ‘globalists’ or the ‘Zionists’ or the ‘urbanites.’”

“We name this shooting for what it was: not an isolated act by an insane individual, but rather an anti-Semitic hate crime,” Lis wrote in an email to The Hoya. “We call on all students to take action. Learn about antisemitism. Speak out against those who vilify capitalists, communists, globalists, or Zionists, when they really mean Jews. Raise your voice to eradicate anti-Semitic language in your community. For if not now, when?”

Both Jewish Life at Georgetown and the Georgetown Israel Alliance wrote that despite the immense loss the global Jewish community has suffered, it will find strength in its unity in the face of hate crimes and efforts to tear it apart.

GIA President Ben Goodman (SFS ’20) expressed solidarity with those affected by the shooting and said that action must be taken to combat antisemitism. (Full Disclosure: Goodman is a deputy editor for the Sports section of The Hoya.)

“We are devastated by last weekend’s senseless massacre, but we resolve to move forward and continue to confront antisemitism and stand by the Jewish people worldwide,” Goodman wrote in an email to The Hoya. “We were comforted to see an outpouring of support in Israel, where vigils were held in Tel Aviv and Jerusalem. Whatever country we reside in, the jewish people are one, which we are reminded of now more than ever.”

The directors of Orthodox Christian Life,  Protestant Ministry and Catholic Life at Georgetown V. Rev. David Pratt, Rev. Bryant Oskvig and Dr. Jim Wickman jointly wrote an open letter to the Georgetown community condemning antisemitism and growing social fragmentation. The directors warned against letting such divisions erode senses of community at Georgetown and around the world.

“We must affirm the truth that persons of different religions and different races can live together in authentic community with the blessings of peace and mutual affirmation,” the directors wrote.  “We need to embrace this benevolent version of community, a version in which we recognize and care for the needs and wounds of one another, no matter our differences. By this, we can offer light against the current shadow being cast upon our world.”

Professors also have a responsibility to stand up to antisemitism and to radical biases in their classrooms, Director of the Center for Jewish Civilization Jacques Berlinerblau said.

“Now is not the time for platitudes or euphemism,” Berlinerblau said in an interview with The Hoya. “I really think professors need to put themselves out there.”

The United States has failed to properly to acknowledge the extent to which antisemitism is present and alive today and needs now more than recognize the threat it poses, according to Berlinerblau.

“Enough with prayers. We need analysis,” Berlinerblau said. “The issue of antisemitism and bigotry in the United States is bigger than we care to imagine. It’s not a small phenomenon.”

In the face of such a tragedy, however, the Jewish community at Georgetown has expressed its resolve and belief in the possibility of change. Though bigotry persists, so, too, will the jewish faith and its followers, Harouse said.

“This past Shabbat was a grim reminder that the tensions aren’t going anywhere,” Harouse said. “That we’re gathered here today, tears still fresh, is a testament to our strength and perseverance. The tensions may still be here, but we are too, with a hope that’s been burning for some 2000 years. Am Yisrael Chai.”