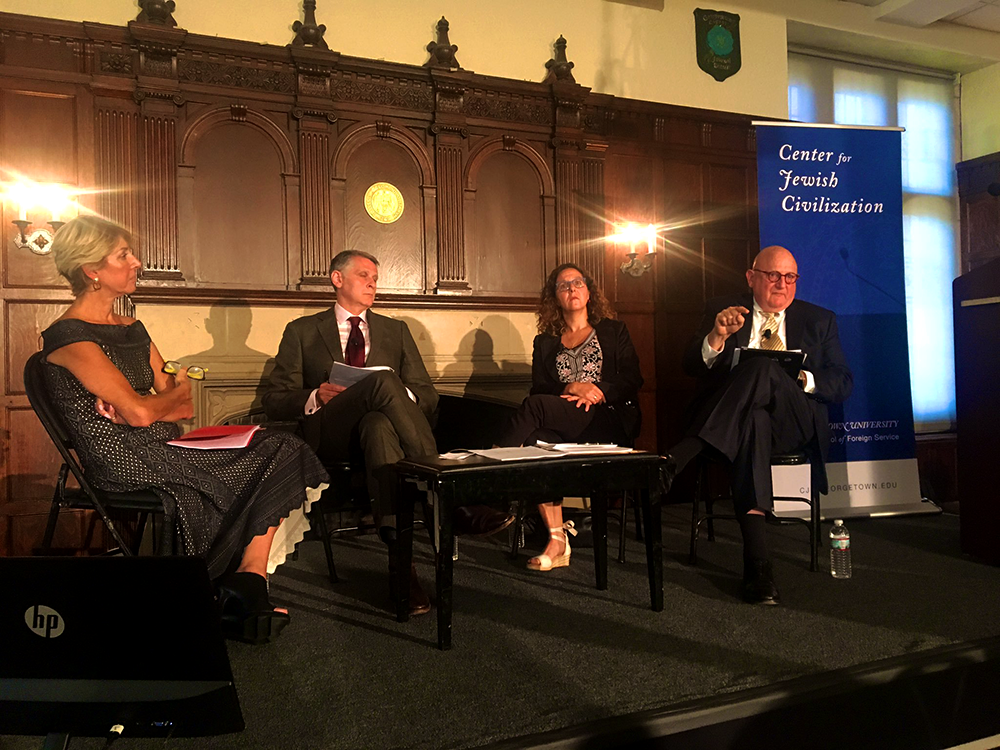 The polarization of political discourse is a concerning trend in a time where there are growing antisemitic sentiments in the United States, panelists said at a dialogue about American Jews in the era of the President Donald Trump administration Sept. 3.

The event titled “Loyal/Disloyal? American Judaism in the Era of the Trump Presidency,” which was sponsored by Georgetown University’s Center for Jewish Civilization, featured notable experts who remarked on Trump’s evocation of the antisemetic trope of “dual loyalty” of American Jews between the United States and Israel.

At a press conference with the president of Romania on Aug. 21, Trump stated American Jews would be disloyal to Jewish people and Israel if they voted for a Democrat in the upcoming election, according to The New York Times. His remark was criticized for evoking an antisemitic trope that the American Jewish community have a dual loyalty and are more faithful to Israel than their own country.

While no panelist drew an explicit connection between Trump’s statements and the rise in antisemitic hate crimes addressed at the event, they agreed there has been a recent shift in how people approach current political discourse reflected in the rhetoric of political leaders.

Unclear and careless rhetoric makes room for antisemitism and stops individuals from criticizing like-minded peers, according to Senior Fellow in the Center for Middle East Policy at Brookings Institution Tamara Cofman Wittes.

“I think that our broader political discourse and the way it has degraded has created a permissive environment,” Wittes said. “The permissive environment not only may deter people from calling out those in their own camp, but it also makes it easier for the real haters to insinuate this content into the political discourse in ways that other people may be uneducated enough to fall prey to.”

Other panelists included Director of the CJC at the School of Foreign Service Jacques Berlinerblau, visiting professor of contemporary antisemitism and CJC Senior Fellow Ira Forman and Senior Vice President for Foreign and Defense Policy Studies at the American Enterprise Institute Danielle Pletka.

The number of hate crime incidents targeting Jews and Jewish institutions in the United States rose 37% in the year following Trump’s inauguration, according to data released by the FBI. The number of hate crimes on Georgetown’s campus surged 275% in 2017. Antisemitic graffiti was found in restrooms outside Makóm, the Jewish prayer space, in May 2017, and swastikas were found spray-painted in bathrooms in LXR Hall during Rosh Hashanah the same year.

The recent rise in antisemitic hate crimes in the United States corresponds with a growing partisan divide in the country, Wittes told Tuesday’s audience.

“If we’re talking about the situation of American Jews, what has changed is the well documented rise in antisemitic hate crimes, both violent and nonviolent,” Wittes said. “I would say that is part of a context in our American political discourse that has become more polarized, coarser, unrestrained and corrosive of some of the bonds that hold us together as a country.”

“Antisemitism is a scourge, and the politicization of it and the politicization of everything is to our detriment,” Pletka said. “We need to be able to have a conversation and a dialogue across different ideologies and across different political persuasions and religious persuasions. The more that we try to use it as a tool that we can hang around the necks of our political adversaries, the more that it becomes a problem that we neither talk about in an intelligent way nor seek solutions to.”

Politicizing topics such as antisemitism impedes effective discourse between those with varying political beliefs, Pletka said.

The Muslim and Jewish communities on Georgetown’s campus have supported each other in response to antisemitic and Islamophobic attacks. After the attack at the Tree of Life synagogue in Pittsburgh in October 2018, the Muslim Student Association delivered handwritten letters of support to Jewish students and faculty. Members of the Jewish community responded in solidarity by chalking positive messages in Red Square.

Citizens have a duty to stand up against those who put forward antisemitic, racist and sexist sentiments, according to Pletka.

“The worst of the worst are in a category of their own,” Pletka said. “It is those who excuse them, those who create room for them in society, those that tolerate them, are the ones that enable this to spread.”