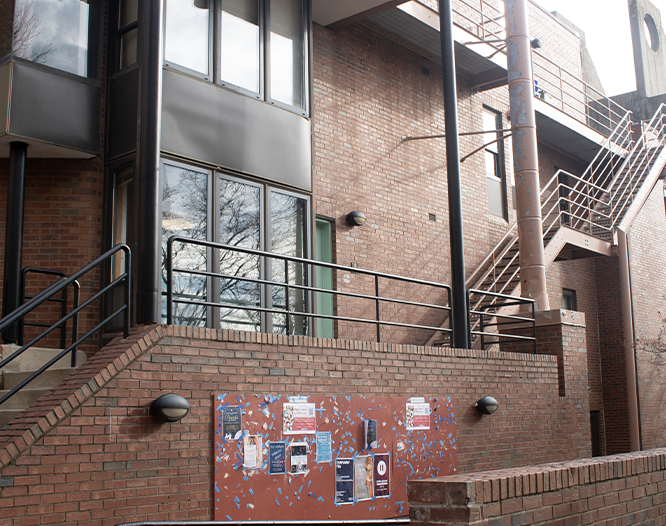 While most Georgetown University students moved home in March after the start of the COVID-19 pandemic, Mark Agard (SFS ’23) stayed on campus instead of returning to his home in Washington state, where he feels he would not have had the resources to continue his classes online. For the rest of the spring semester and the summer, Agard attended classes on Zoom from his Village A apartment.

Now, seven months later, Agard is still living on campus among the few hundred students granted on-campus housing this fall, with no clear idea of what the spring will hold. Agard and others have had to make plans for housing with the university at a time of great uncertainty, with Georgetown’s policies subject to change.

Georgetown’s Office of Residential Living sent an email update to all on-campus students Oct. 28 notifying them of their automatic approval for spring on-campus housing. Although students were told to move in no earlier than Jan. 11, Residential Living provided no update on the dates and costs for the spring semester, which will be released after the spring 2021 operating decision, according to the email.

Students said the housing application may have been premature as Residential Living asked them to declare their plans by Oct. 13, two weeks before they received confirmation for spring housing. Many students, including Agard, are unsure of what the next few months will hold. They also said they could not make a decision without more information from the university, including details on spring housing options and future move-out and storage policies, as well as additional housing costs.

The university’s Fall 2020 Plan originally said that students living on campus would move out by 12 p.m. on Nov. 21. However, the university provided on-campus students a second Housing Stability Application to select their winter move-out plans in an Oct. 6 email from Associate Vice President for Student Affairs and Dean of Students Jeanne Lord.

The application offered students three possible plans: move out by Nov. 21, stay through finals and move out by Dec. 18, or stay through winter break until the start of the spring semester.

There will be no additional cost for staying on campus after Nov. 21, according to the Oct. 28 email. However, the university offers no meal plans for this period, so students must cover their own food costs. Before this email, students were unsure as to whether there would be additional costs and how these could play into their decision to stay on campus past Nov. 21.

“They’re asking us to make that decision with completely inadequate information,” Agard said in a Zoom interview with The Hoya. “Are there going to be hybrid courses, do we have to be online, are they going to expand the stability housing, are they going to reduce it? There’s so many things that are just up in the air and they’re asking us to make a judgement call like a month before.”

Although on-campus students are guaranteed spring housing, Residential Living encourages all students to pack their belongings and, if possible, take them home, in the case that public health conditions or individual circumstances prevent some students from returning to campus. The university said it will not arrange for any packing or storing of belongings left in students’ rooms, and any remaining belongings will be thrown away.

Jameson Nowlan (SFS ’23), who is currently living on campus, also criticized the housing application for its invasiveness into the home life of many students.

“A lot of students felt like they had to fully disclose their personal situations and personal trauma in order to prove that somehow their circumstances are so difficult that they can’t do housing at home. Really, when it comes down to it, a lot of us just don’t have a great home life or family life,” Nowlan said in a Zoom interview with The Hoya. “A lot of us are here for a lot of different reasons and we don’t usually fully disclose why, because it’s our lives.”

Jameson Nowlan (SFS ’23) is planning to stay on campus until Dec. 18, but she was concerned that the university would make students move everything out of their dorms on move-out day. Nowlan said she has nowhere to store her belongings between the end of the first semester and the beginning of the second. She sees the university’s request that students pack all their belongings as a precaution, and she is relieved she is allowed to leave them in her room after Dec. 18.

Nowlan’s greatest worry, though, is that she will not be allowed to live on campus again in the spring. Nowlan said she cannot adequately complete virtual learning at home, so without spring on-campus living options, she may have to graduate late. This may make applying to outside scholarships more difficult because many are contingent upon her set graduation date.

“I’m in a situation where I’m forced to do virtual learning, but I also don’t live in an environment where virtual learning is possible,” Nowlan said. “If I wasn’t welcome back next semester, I would have to take classes even though I know my work wouldn’t be the best, and I wouldn’t be in an environment that is conducive to Georgetown-quality work.”

In an effort to advocate for more transparency, the Georgetown University Student Association supports on-campus students and is working on a letter to the university demanding improved communication, according to an email from GUSA Press Secretary Jacob Bernard (SFS ’23).

Daniella Sanchez (COL ’22), the GUSA director of COVID response, is advocating for on-campus students and has been working to ensure that all student needs are met, including housing and financial aid.

Sanchez and her team are organizing a town hall to listen to concerns and plan to meet with the administration to advocate for students before the official plan is released by Nov. 16, according to a GUSA spokesperson.

“Her first goal is to ensure that students’ needs are met first and foremost, whether it be housing, wifi, accommodations, or financial aid,” the GUSA spokesperson wrote. “Overall, she hopes to coordinate and uplift the needs and concerns of communities across campus by bringing them into the conversation.”

Despite student advocacy, undergraduates on campus still face uncertainty until the university finalizes its plans. Jennifer Linares (COL ’23) is also unsure of her plans for after Nov. 21, and felt that she could not make an informed decision by the Oct. 13 deadline without more specifics from the university. Although she wants to return to her home in Florida for Thanksgiving break, she was concerned about what the move-out requirements could be.