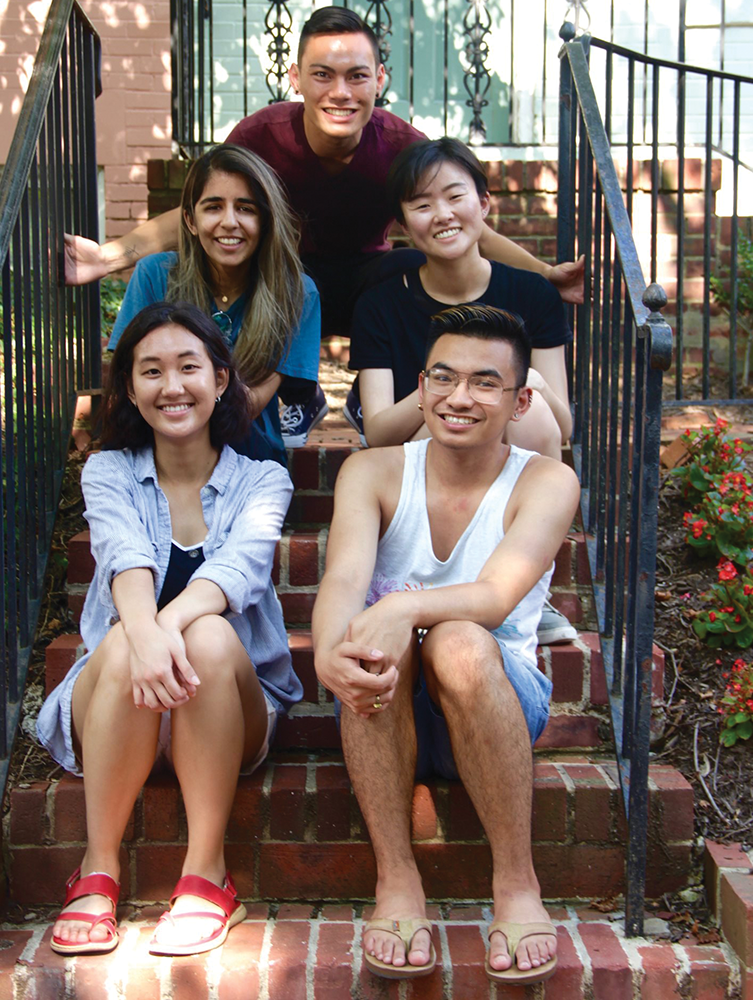 Sitting in the living room of their Magis Row townhouse with the word “HOME” emblazoned on the wall in large, twinkle-light strewn letters, Heejin Hahn (COL ’20) and Jennifer Sugijanto (COL ’20) muse about their final year at Georgetown University.

Hahn and Sugijanto were freshmen when they helped create the Asian-Pacific Islander Leadership Forum, then a burgeoning committee of the Asian American Student Association in 2016.

Two years after its establishment, the forum recently fulfilled the goal of creating a residential space for Asian American students on campus through the establishment of the Asian American Hub for Organizing, Movement and Empowerment, the Magis Row house that was first opened at the beginning of the 2019-20 school year.

The Currents of Institutional Amnesia

APILF founders sought to differentiate it as a more social justice-centric organization in its own right, focusing on creating a proper space for Asian American students on campus and filling a niche for activism within the community.

The underlying fear of this student-led activism, however, is the effect of “institutional amnesia,” or the tendency for initiatives or campaigns to dissipate as key campus leaders depart. The transitory nature of the university often leads to a nonstop cycle of reworking, according to Sugijanto.

“Students want this thing, but because of this institutional amnesia, these students graduate and the campaign doesn’t really live on,” Sugiijanto said. “It’s so transient. You’re here for four years and then you’re out.”

Georgetown students pushed for an Asian American studies program nearly a decade ago, but the movement seemed to lose momentum, according Christopher Shinn, an English professor who began teaching “Asian Americans and the Public Sphere” this year.

“In the 12 years, I’ve seen students raise the issue maybe nine years ago, and that activism raised consciousness when students were demanding courses in Asian American studies,” Shinn said. “But only recently has there been a resurgence.”

As a Magis Row house, the Asian American HOME faces the possibility it will be an installment for just one year. As long as the house remains one of the Magis Row Living Learning Community that rotate on an annual basis, rather than a permanent establishment, it will need to seek approval for its continued existence each year.

For Sugijanto, the process of having to apply and justify the presence of a house sometime feels counterproductive.

“With the house, we have to prove to the university that this space deserves to exist for a reason,” Sugijanto said. “But at the same time, it forces us to get into the conversation of like, ‘Well, what is the purpose of this affinity space, and why is it a space that has to exist for Asian Americans specifically?’”

In many ways, APILF looked to the past efforts of the Black Leadership Forum and the Latinx Leadership Forum when molding their own place on campus, according to Hahn. However, APILF differentiates itself from other respective affinity organizations in its scope and purpose.

“It just didn’t make sense for us to replicate that model because we couldn’t,” Hahn said. “There weren’t enough Asian American social justice spaces for us to be able to collaborate. So, we realized that we needed to create a new space.”

La Casa Latina and The Black House are two institutionalized spaces housed by the Center for Multicultural Equity and Access that aim to host programming and provide a permanent on-campus gathering space for their respective communities.

However, more than simply seeking permanent establishments on campus, APILF leaders hope to create structures that Asian American students at Georgetown want to see preserved for years to come.

Beyond carving out spaces for cultural dialogue and community building, members of APILF have also worked to promote greater visibility for Asian Americans through the development of an Asian American studies program.

“The irony is that the largest minority population at Georgetown is the Asian American population, and for this largest group we haven’t seen the establishment of an Asian American studies program or a department,” said Shinn said.

Of the hundreds of classes in the course catalog this semester, the university currently offers three classes on Asian America, according to APILF’s “2019-2020 Academic Year Asian American Class Guide,” in the English, history and anthropology departments.

By building relationships with several professors who encouraged their activism, Sugijanto found an instructor to help her design Georgetown’s first “Intro to Asian American Studies” class: English professor Christine So. After fielding initial student interest through surveys, drafting a comprehensive syllabus and working directly with So, Sugijanto’s efforts to create the class reached fruition last spring.

The course offerings seemed to have sparked a greater awareness among the Georgetown community about Asian American studies as a whole, according to Sugijanto.

“The most inspiring thing for me to see is that people actually talk about Asian American studies like it’s a thing,” Sugijanto said. “Two years ago, when we first started it, people were like ‘Oh, Asian American studies at Georgetown. What does that mean?’ And now, people are talking about it and asking more questions.”

Shinn’s course currently has 30 students enrolled, but he expanded the original classroom capacity for the class to accommodate others wanting to take it.

“The fact that there are students who are interested and wanting to enroll in large numbers is a sign that the demand is there,” Shinn said. “We have to build on this.”

Despite Shinn’s efforts to include more students than initially allowed, many students still find themselves unable to enter the limited selection of courses that currently focus on Asian Americans. Though both have publicly advocated and worked for the creation of an Asian American studies department, Leina Hsu (COL ’22) and Gina Kang (SFS ’22), co-chairs of the AASA Political Action Committee, were waitlisted for Shinn’s and were unable to enroll.

In February 2019, APILF and AASA PAC partnered together for “Georgetown Doesn’t Teach Me,” a photo campaign to highlight the dearth of Asian American studies courses on campus.

AASA PAC, which similarly seeks inclusion for Asian Americans, takes a different, more person-to-person approach from the more activist-rooted APILF, focusing on informal discussion sessions, programs and articles about and by Asian American students on campus.

Building Something That Lasts

Though obstacles still exist, this iteration of student activism for greater Asian American representation in Georgetown’s curriculum has inspired hope in many community members on campus.

The African American studies department, for example, was converted from a program into a permanent department in 2016, with a unanimous vote from the board of directors after significant pressure from students. Before that, the department had existed as an interdisciplinary program since 2003.

“I feel much more optimistic, because in the past there wasn’t a sort of precedent,” Shinn said. “Now, there has been a will to really establish African American studies as a field that people can major in. The reason why I’m optimistic is [that] we’ve seen progress, and now it’s time for an expansion of that diversity and inclusiveness initiative to honor the sacrifices and the efforts made by Asian American students at Georgetown.”

Moving forward, the fate of the Asian American HOME and its state of impermanence stands as a testament to current and future Asian American Hoyas’ will and desire to maintain it, according to Sugijanto.

“I feel like something we’re trying to do is set up a good institutional framework for students to move forward. I hope that at least what we can leave behind is a more accessible archive for people to be able to tap into and move forward in organizing,” Hahn said.

Within this challenge, however, comes the task of crafting a message that will resonate throughout the diverse identities that make up the Asian American community at large, according to Hahn.

“There’s always debate about what ‘Asian’ and ‘Asia’ include,” Hahn said. “It’s a race that’s socially constructed in a way that doesn’t really make a lot of sense, but because we have already been politically grouped together, there is still some sense in politicizing it together.”

Hahn and Sugijanto’s efforts have helped bring about tangible change in the organization’s early years of existence, but challenges persist, both in the form of campus administration and within the Asian American community itself.

While Shinn remains optimistic about student efforts to improve Asian American representation on campus, he acknowledges that the onus still lies on the university to realize the aim of these movements.

“Asian Americans who have contributed so much to the life of the school do not have a curriculum that reflects their history, cultures and traditions,” Shinn said, “[so that] means that we have a ways to go. Hopefully the university will fulfill that promise.”