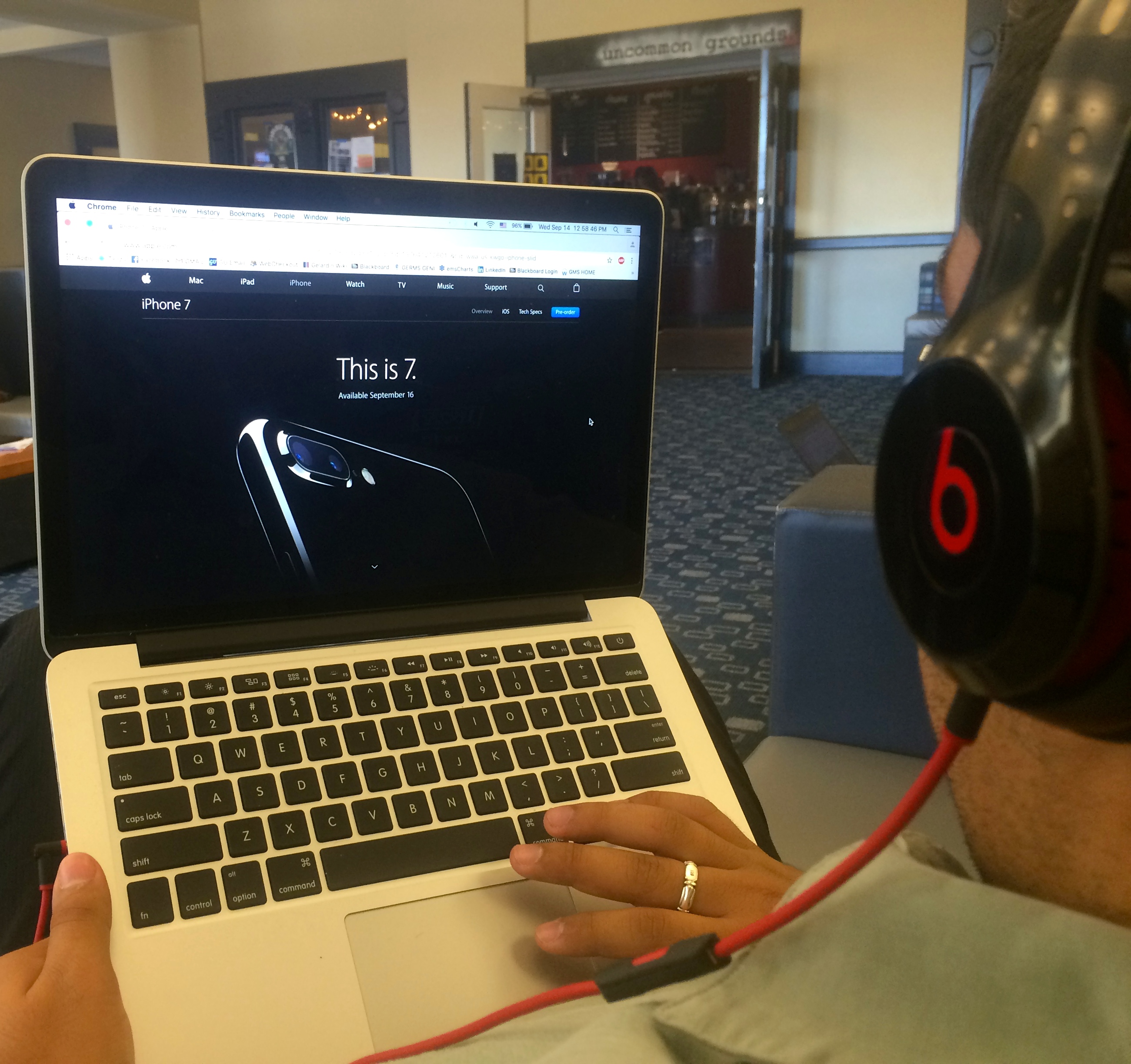 However, the iPhone user community, including users at Georgetown University, had mixed reactions to one notably absent feature — the new iPhone has lost its headphone jack.

The newest iPhone released since the iPhone 6 line debuted in September 2015, the iPhone 7 reportedly has a faster processor, a more efficient operating system, a higher quality camera and a battery life one hour longer than its predecessor.

Another new development is the device’s IP67 certification, meaning the phone is completely protected against dust and is water resistant in depths of up to one meter, according to DSM&T Co. Inc., an American technology manufacturer.

Despite these hardware advancements, many consumers are fixated on the phone’s lack of a headphone jack, a detail that requires users to purchase a $9 adaptor from Apple for typical 3.5-millimeter headphones, or to switch to wireless headphones like the Apple Airpods, also released last week, which sell for $159. These costs are added to the price of the iPhone 7 itself, which ranges in price from $649 for a base model to $849 for the 256 GB model.

Many consumers expressed their dismay on social media regarding the headphone jack’s absence on the iPhone 7.

Professor Ronald Goodstein, who teaches marketing at Georgetown, said Apple was leaving its original marketing roots in the past by nixing its classic headphones.

“The entire communication strategy surrounding the original iPod was the headphone,” Goodstein said. “Abandoning this iconic imagery and feature is a big mistake.”

Goodstein also discussed the risks of losing the headphones, and the potential profits that Apple can reap through getting rid of headphones.

“Apple is, to me, gouging the consumer to spend an additional $150-plus to be able to listen to the music and calls received on the iPhone 7,” Goodstein said.

Professor Simon Blanchard, who also teaches marketing at Georgetown, had a similar observation.

“Headphone jacks will require significant behavior change, as some people will have to buy new headphones and adapters to charge … [their] … phone[s] and listen to music at the same time,” Blanchard said.

However, Blanchard also suggested that the lack of earbuds could help Apple make a profit.

“It helps with phone design, and helps get users more committed to — and stuck into — the Apple ecosystem,” Blanchard said. “They did the same thing when they removed all CD drives in their MacBooks, people complained, realized that they didn’t really need it, and over time … adapted.”

Goodstein added that Apple’s wireless headphones  are inconvenient for consumers, but a sound marketing move by the cutting-edge technology giant, which holds a market capitalization, or a value in the stock market, of $622 billion.

Some Georgetown students also had the perception that Apple was guilty of price gouging in the release of the iPhone 7.

Tim Ingrassia (COL ’18), a computer science major, did not see the merit in Apple’s decision to remove the headphone jack from the iPhone 7 design.

“I feel like it is a largely unnecessary removal,” Ingrassia said. “The 3.5 millimeter jack has had a long history … it’s been in use for long because it is simple, and it works well. To remove the headphone jack is purely a monetary move by Apple.”

Ingrassia also noted that Apple has a history of making similar marketing moves to the iPhone 7 launch.

“This is not the first time that they have done something similar: Instead of using the standard USB cable, the original Apple  had its own proprietary – and expensive – cable,” Ingrassia said. “Next, Apple introduced the lightning cable and continued the tradition of refusing to use the standard and instead introducing their own, more expensive cable.”

However, despite opposition to the design, Apple is unlikely to lose many customers from the design change, according to Goodstein.
“Their loyalist … following seems to adopt whatever they put out with few exceptions,” Goodstein said.