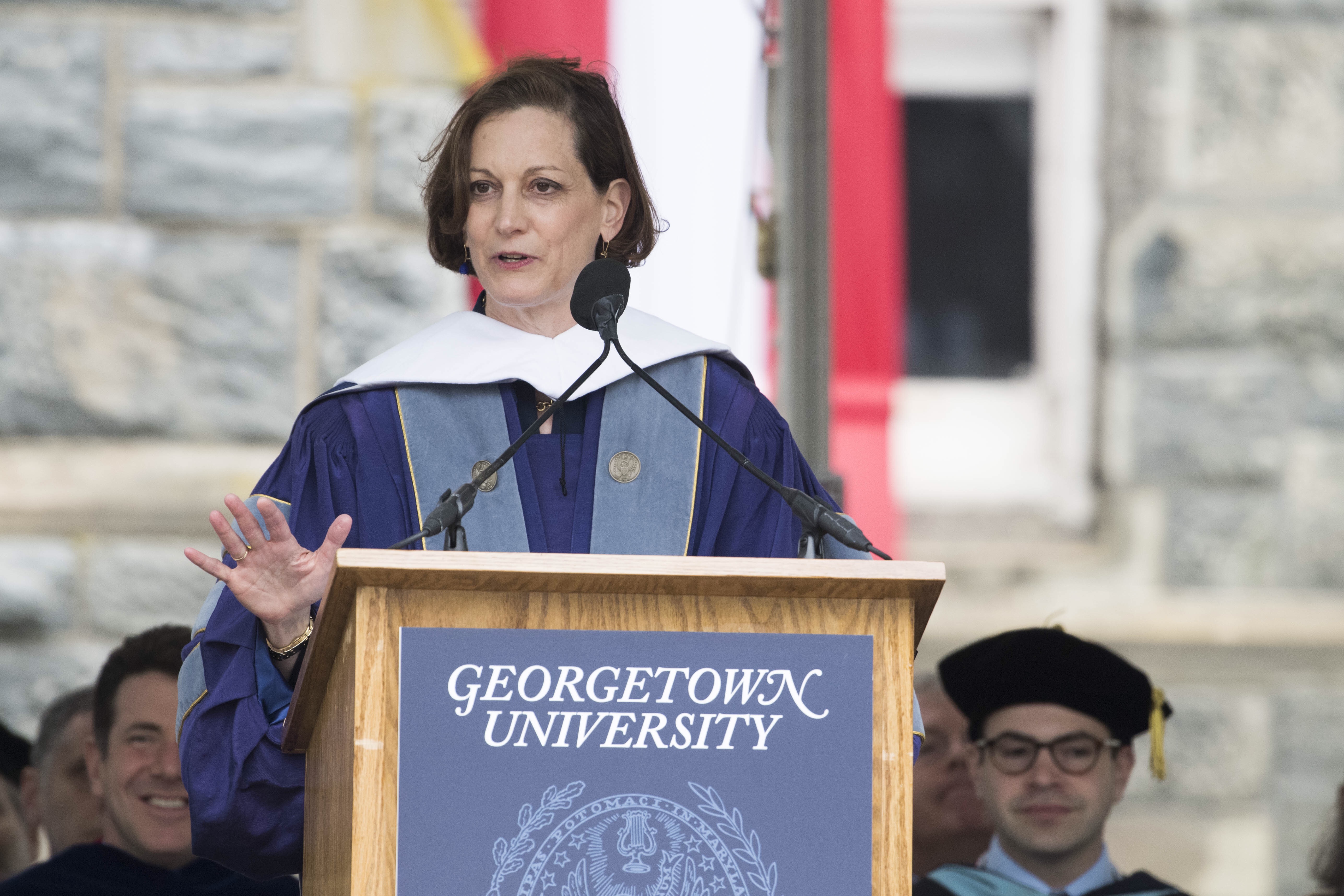 A world where education, internationalism and service are increasingly scorned requires experts to address the issues of the future, Pulitzer Prize-winning author and journalist Anne Applebaum told School of Foreign Service graduates at their May 20 commencement ceremony.

Applebaum, a Washington Post columnist and frequent critic of President Donald Trump and the global rise of populism, warned that the values associated with the school have recently come under attack.

“When I first started to think about this speech, a few weeks ago, it suddenly struck me that every phrase in that title, School of Foreign Service, is now under assault in a way that it never has been before — or at least not that I can remember, and I am quite old,” Applebaum said.

“After all, people with expertise are small in number. So, it doesn’t matter anymore where you come from, how you got here or how hard you worked to get here — you are now part of an elite, and in some places, you may discover that you are part of an unpopular elite,” Applebaum said.

Without mentioning them by name, Applebaum referenced several world leaders who recently rose to power by riding waves of populism, including Trump and Filipino President Rodrigo Duterte. The latter won with 39% of the vote in a five-candidate field, after running a campaign marked by nationalist fervor.

“In countries all over the world, in Venezuela, the Philippines and Poland, and even in a few places closer to home, political movements have lately proven that it is possible to win an election by running against unpopular elites.”

Applebaum endorsed Trump’s Democratic opponent, former Secretary of State Hillary Clinton, in a July column in the Washington Post, saying Trump’s administration would welcome authoritarian leaders like Russian President Vladimir Putin. As The Hoya previously reported, Applebaum said Trump is “unfit to be president” in a Post column published May 16.

Applebaum also contended that the resurgence of nationalism in North American, European, and Asian politics has undercut the value of cosmopolitanism and further brought internationalists under scrutiny.

“Around the world, people with an interest in crossing borders, in solving international problems, or in doing international business are now treated with suspicion in some places where they were welcomed only a few years ago,” Applebaum said. “The loyalty of internationalists is now questioned. ‘Globalist’ is now a term of abuse.”

The act of devoting one’s life to working in the public sector has lost esteem, Applebaum said, as antipathy toward government undermines respect for public service.

According to Applebaum, however, work in government has a significant impact.

Applebaum encouraged the SFS graduates never to diminish the value of their education — submitting her defense of the institution whose mission, in her view, faces a global challenge.

“I can’t predict what will happen in the world during the rest of your lifetimes,” Applebaum said. “But I do know that whatever problems the world is going to throw at us, either in the next 10 years or the next 10 minutes, we will need people like you, people who have been to schools of foreign service, to help us solve them.”