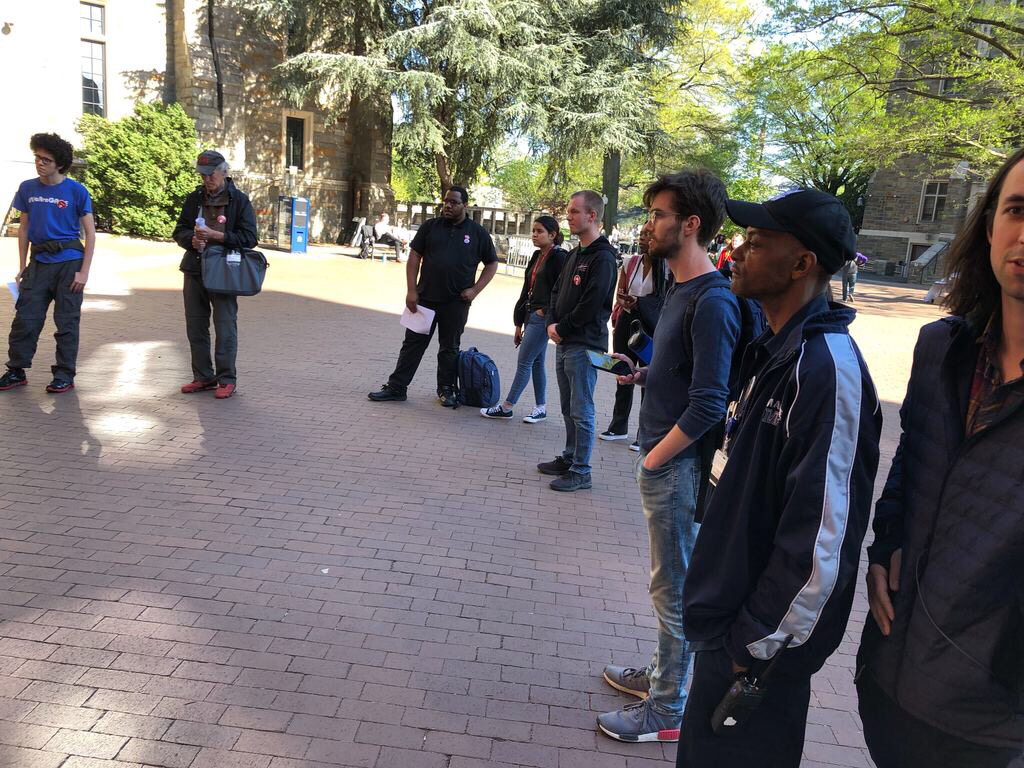 Student activists and other community members celebrated at a victory rally in Red Square on Tuesday in honor of the tentative agreement between Aramark and Unite Here, the labor union representing Georgetown food service workers. Rally attendees included members of the Georgetown Alliance of Graduate Employees, Georgetown Solidarity Committee and Georgetown students, among others. Unite Here union members at Georgetown voted unanimously to ratify the contact in a 105-0 vote, according to Joshua Armstead, vice president of the D.C. chapter of Unite Here.

Before the agreement, GSC, a student group dedicated to promoting workers’ rights, had planned a protest for justice outside O’Donovan Hall in support of Georgetown food service workers with the goal of calling attention to the ongoing negotiations. But the event was reorganized as a rally following a tentative agreement between Aramark and Unite Here at the Georgetown Hotel and Conference Center on Monday night. The full details of the agreement have not yet been released.

Contract renegotiations began after the labor contract between Aramark and Unite Here expired in December. The workers first attempted to appeal their contracts through Unite Here in January, but Aramark returned their proposal without meeting their demands. Following a second failed appeal in February, the workers protested Aramark on Feb. 27 and April 4, citing low wages, short break times and disrespectful management.

Georgetown workers’ experience will improve because of the new contract terms, according to Armstead, who spoke at the rally.

“We wanted to get a real deal that propelled ourselves to a future where we can live in D.C., where we can work with pride, in the face of a multibillion dollar company, and we got that last night,” Armstead said in an interview with The Hoya.

Unite Here workers on Georgetown’s campus had the opportunity to vote on the terms of the contract in Leo’s April 16, and in the Leavey Center on April 17. The results of the ratification vote were not counted by the union until all the votes were cast, Armstead said.

Union members acknowledged the role student activists played throughout the process of reaching a new contract agreement, according to Armstead.

“We, as workers, are proud to have won this, and even more humbled that students answered our calls for solidarity, demonstrating that workers and students are united in demanding justice,” Armstead wrote in the Facebook event.

Fr. Raymond Kemp, a D.C. community fellow at Georgetown’s Center for Social Justice and adjunct theology professor, spoke at the end of the rally. As April 16 also marks the anniversary of Martin Luther King Jr.’s famous “Letter from Birmingham Jail,” Kemp recognized the connection in his remarks at the rally.

The contract agreement came about as a result of pushback by union members, according to Kemp.

“We need to give thanks to all the activists, all the radicals, all the organizers in our life,” Kemp said in his speech. “We need to understand that by creating tension around things that are right and good and true, and especially getting rid of unjust situations and unjust causes, we’re walking in the footsteps of those people.”