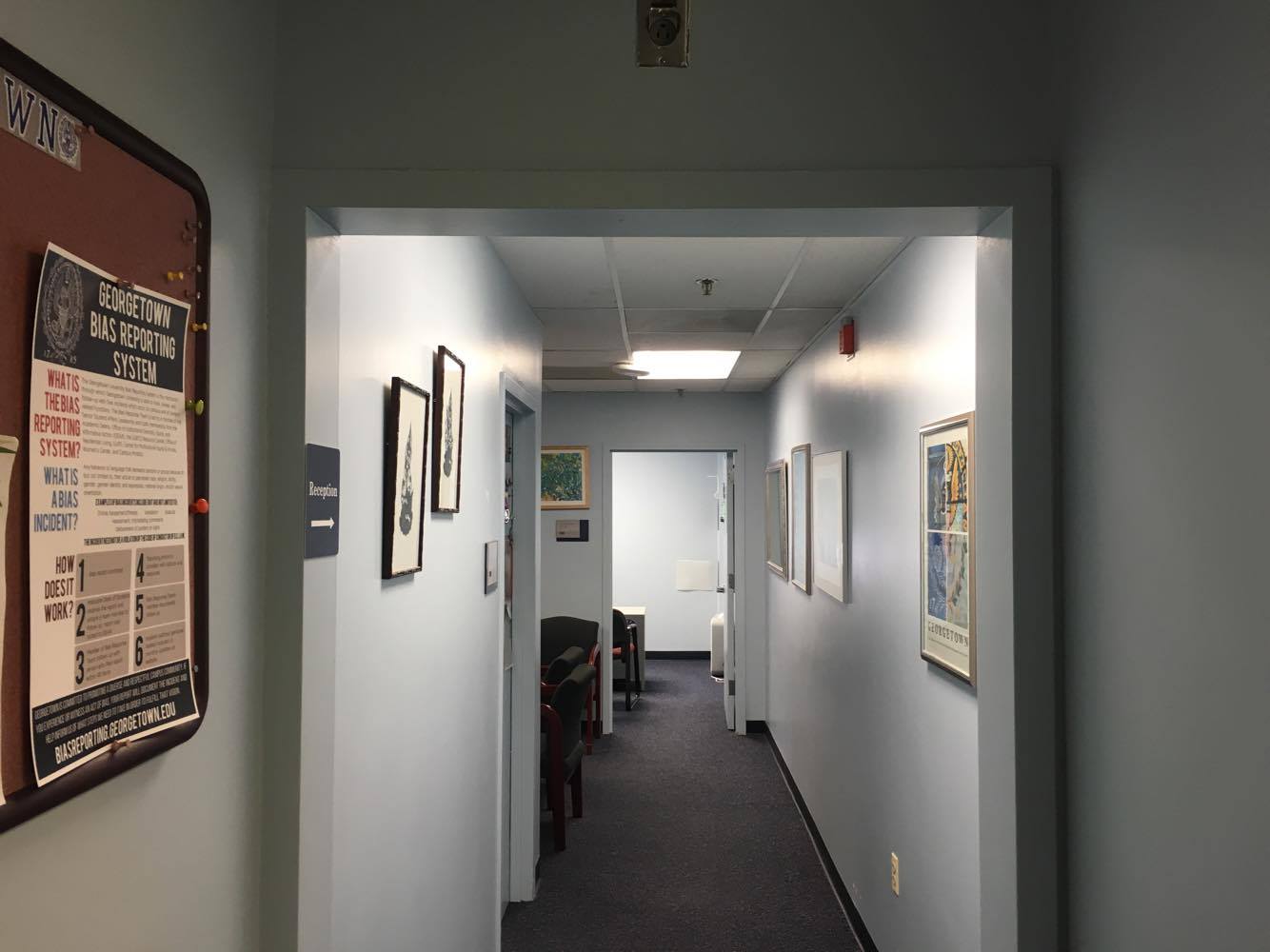 Underfunded and understaffed, Georgetown’s Academic Resource Center received criticism for its wheelchair-inaccessible location, insufficient staff size and lack of visibility in an external review submitted to the Division of Student Affairs in January.

The 14-page report identifies deficiencies and offers 15 recommendations, including expanding the staff, relocating the center, improving technology and increasing faculty education on working with students with disabilities and with student-athletes.

The report, obtained by The Hoya last week, has not been publicly released as of press time.

Sheilah Shaw Horton, vice president for student development at Loyola University of Maryland, and Myrna Cohen, executive director of the University of Pennsylvania’s Weingarten Learning Resources Center, conducted the review from Oct. 28 to Oct. 30 last year at the request of Vice President for Student Affairs Todd Olson, using information gathered from interviews and breakout sessions with students, faculty and administrators involved with the ARC. Horton and Cohen could not be reached for comment despite multiple efforts.

Housed under the Division of Student Affairs in the Office of the Provost, the ARC offers tutoring services and individual consultations and coordinates exams for 846 varsity athletes and around 750 students with registered disabilities. The center also provides assistance with study skills to around 17,000 undergraduate and graduate students.

However, staffed with five full-time professionals to provide academic services for the entire student body — with the exception of the men’s varsity basketball team, which has a separate coordinator under the athletics department — the ARC “has a minimal ability to serve the populations it professes to support,” according to the report.

Olson distributed the report’s executive summary to the Disability Working Group meeting Wednesday. The group, which consists of 30 students, faculty and administrators, aims to address disability rights on campus.

“I’m a little skeptical as to why the full report was not shared at the working group meeting,” Khan said in an interview with The Hoya. She and Fisk received a full copy of the report from an unofficial source prior to Friday’s meeting.

In an interview with The Hoya, Olson said it is not standard practice for the university to release external review reports, and the university has no plans to release the full report to the public at this time.

One of the primary concerns highlighted in the report was the ARC’s location, which was described as “inadequate, embarrassing and deplorable.” Located on the third floor of the Leavey Center, the office is described as “not wheelchair friendly” and “difficult to locate.” In addition, the report indicates that the room used for accommodated testing on the fifth floor of the building was only able to accommodate nine students, describing it as a “former closet” and “claustrophobic.” The report suggested relocating the office to a larger space.

Olson said conversations regarding moving the ARC to a new location within the Leavey Center as well as hiring an additional full-time coordinator were ongoing, but that nothing has been finalized.

“We had discussed just where we needed to go certainly prior to that, but the report has helped focus some of our work, so we believe it is very helpful in shaping and sort of helping guide where we go next,” Olson said.

In recent years, the difficulties plaguing the ARC were brought to light through various cases in which the center was unable to offer assistance to students with disabilities. In April 2014, the ARC denied aid to a student requiring an American Sign Language interpreter for a Law School Aptitude Test class sponsored by GUSA, attributing the decision to administrative budget cuts.

Olson declined to comment on changes in funding allocation to the ARC.

The Americans with Disabilities Act of 1990 and Rehabilitation Act of 1973 require institutions that receive federal financial assistance to provide reasonable accommodations to students with disabilities. In 2011, the parents of a student at Georgetown filed a complaint to the District of Columbia Office of Civil Rights, alleging that the university discriminated against their daughter on the basis of disability following a medical leave of absence. The investigation resulted in an agreement by the university to revise its MLOA policies.

Olson maintained that the university fully meets ADA compliance. Horton and Cohen’s report cited an anonymous administrator who said, “At a university that prides itself on excellence, we are just meeting compliance.”

The report identifies a lack of sufficient academic support for students with disabilities. ARC Director Jane Holahan and ARC Associate Director Annie Tulkin work with both students with cognitive, learning and physical disabilities and those without disabilities at the main campus and determine accommodations for those students at the Georgetown University Medical Center, while ARC Coordinator of Administrative Services Shannarese Sims provides administrative support.

The report highlighted this disparity, noting “the imbalance that exists between legitimate demands on services and the resources to meet those needs inevitably leads to unintended neglect.”

Furthermore, the report suggests that with the limited size of the ARC, students with disabilities and student-athletes are prioritized over students who also require academic support, such as students from underprivileged backgrounds and international students.

Holahan, however, said she did not find this to be true, pointing to what she said was the more common problem of students failing to reach out to the ARC when they are recommended to do so by professors.

“A lot of people — students — referred here fail to follow through,” Holohan said in an interview with The Hoya. “And I think a lot of the time it’s due to embarrassment, shame; they don’t want to admit they do need this help.”

To address the inadequacy of the ARC’s services for students with disabilities, Horton and Cohen recommended hiring two additional coordinators focusing on learning strategies and accommodations.

The report also details the lack of academic support resources for student-athletes. While the men’s and women’s basketball teams are each supervised by a coordinator, the remaining 25 varsity teams are monitored by ARC Associate Director for Student-Athlete Services Shelly Habel. The academic coordinator for women’s basketball, Adam Polacek, is housed in the ARC, while Kim Curry serves as academic advisor to the men’s basketball program under the athletics department.

According to the report, several community members suggested that the allocation of individual coordinators for the basketball teams “sends mixed messages regarding the academic focus of these two teams.” However, Athletic Director Lee Reed attributed this to differences in resources for more competitive and visible sports teams.

“We have [teams] that compete and we resource to compete on a national level … and we have some that are more participation sports,” Reed said.

As the coordinator for all nonbasketball sports, Habel works with more than 800 students on course registration, sending travel emails to professors, arranging final exam conflicts and recruiting tutors.

As a result of her workload, Habel is only able to monitor students identified to be academically at risk. According to Habel, she reviews 200 to 300 students’ schedules per semester during pre-registration.

“We have tried to rationalize the work in a way where I am doing more triage than I am day-to-day operations, which is unfortunate because it’s like an emergency room,” Habel said in an interview with The Hoya. “As opposed to proactive, it tends to be a little more reactive.”

The report notes that the ARC is significantly understaffed in comparison to equivalent centers at similarly sized universities, where Habel said “there are multiple ones of me.” The Office of Academic Support for Athletics at Villanova University has five full-time staffers.

“We’ve been working on this for at least two or three years and there have been no changes, at least in terms of reducing the number of teams or adding staff,” Habel said.

Reed said while the athletics department acknowledges the need for more academic support staff, budgetary constraints do not allow for further expansion. Reed also said the department has been hiring graduate students with experience in learning support to assist Habel with her operations.

“For us, just having another Shelly Habel would be very helpful,” Reed said. “We’re not trying to ask for at this point in time another full-time [coordinator]. We don’t think it’s feasible right now. … We’re in a resource-constrained environment like everybody else on campus. What we try to do is provide incrementally the support we can provide for our programs.”

Despite the current constraints the ARC faces, Habel said she hopes that the center will receive more funding to remedy its ongoing problems.

“We’ve been trying to work with the president’s office to indicate the need. It’s an ongoing conversation,” Habel said. “Hope springs eternal.”