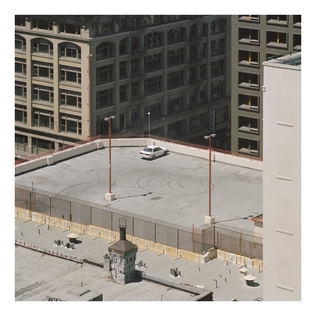 Ignore the simple title and nondescript album cover, and just press play: steeped in dreamy instrumentals and surreal lyrics, the latest album from Arctic Monkeys, “The Car,” will make you feel like you have stepped into a parallel universe.

While the album’s lyrics are undeniably distinctive, it is the instrumentals that shine throughout “The Car.” Performed with a string orchestra, Arctic Monkeys take full advantage of the musical range the instruments have to offer to create a luscious atmosphere that heightens each song to cinematic heights.

No song better encapsulates this than “There’d Better Be A Mirrorball,” in which Arctic Monkeys aren’t afraid to let their instrumentals shine for nearly an entire minute before the lyrics begin. This mix of drums, keyboard and strings nicely kicks off an album steeped in orchestral experimentation and skill.

Arctic Monkeys’s instrumental tricks don’t stop there; a little over three minutes in, dreamy strings reminiscent of a movie soundtrack sink in to complement the shifting tone of the song from fading hope to reluctant acceptance of unrequited love.

The band uses strings at a turning point again twice in “Body Paint” — the fifth track of the album and second single — first around 1:55, with a playful staccato crescendo, before building up at around 2:30 and letting the fuller, grand yet melancholic string orchestra join in.

Through lyrics laced with vintage references, niche eye-winks and seemingly random artifacts transposed together, lead vocalist Alex Turner infuses “The Car” with the surreal feeling of existing within another dimension.

With lines like, “Lego Napoleon movie / Written in noble gas-filled glass tubes” in “Hello You,” the album’s eighth track, and “Richard of York: The Executive Branch / Having some fun with the warm-up act,” in “Perfect Sense,” the album’s final track, Turner cites familiar — and once-familiar — objects and figures, inspiring the listener to imagine them in new contexts.

“Jet Skis On The Moat,” the album’s second track, mixes funk-influenced instrumentals with hodge-podge lines like “Jet skis on the moat / They shot it all in CinemaScope” and “Showstoppers anonymous / Come over here and give your buddy a hug.” Turner’s slick voice complements the song’s relaxed tempo, as he dreamily sings the lyrics in a manner that dares the listener to regard his words as anything but normal.

But the album’s lyrics evoke more than just the surreal. With lines like, “You’re getting cynical and that won’t do / I’d throw the rose tint back on the exploded view,” in the opening track and first single, “There’d Better Be A Mirrorball,” Turner shows off his songwriting prowess, sharpened by two decades of experience. Turner expertly reconstructs cliches like “rose-tinted glasses,” retaining their essence to hit the listeners with their time-tested truths while reforming the words into new contexts.

While distinctive, the roots of the album’s smooth cinematic style are a clear continuation of the band’s 2018 album, “Tranquility Base Hotel and Casino,” which received a polarized reception from fans surprised by the band’s new direction. “The Car” shows how Arctic Monkeys have developed in the four years since releasing their last album, with the wider range of instrumentals giving their songs a deeper sound and depth.

Arctic Monkeys have become more comfortable with this new sonic terrain and aren’t afraid to venture into new territory, even if it means leaving behind the indie and garage rock style of their early albums that first brought them to fame.

If you close your eyes and listen to “The Car,” you can imagine yourself in the dreamy universe of the Arctic Monkeys’ own creation; when the album finishes and you open your eyes, you’ll find yourself hoping for one more song, wondering when their next album will come out and what they will do next.