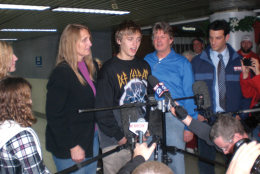 Four months ago, Derrik Sweeney (COL ’13) landed in St. Louis, Mo., marking the end of a four-day-long ordeal that began when he was arrested by Egyptian police for protesting in Cairo’s Tahrir Square.

As his first semester back at Georgetown concludes, Sweeney said the end of the term is shaping up to be very different from his final few days in Cairo.

In November, Sweeney and two other American students studying at The American University in Cairo were arrested for allegedly throwing Molotov cocktails and clashing with police during violent demonstrations in Tahrir Square. The three students, arrested early on the morning of Tuesday, Nov. 22, were initially held in Cairo’s Abdeen courthouse.

When news of the arrest of Sweeney and fellow students Greg Porter from Drexel University and Luke Gates from Indiana University first broke, the story made headlines across the nation. For Sweeney’s friends and family, it was a harrowing experience.

Paulina Sosa (COL ’13), who also studied abroad at AUC last fall, said she saw Sweeney the afternoon of Monday, Nov. 21, just before he joined the protests. Sosa thought the media must have reported the wrong name when she first heard about the incident.

“The situation still seems surreal,” she wrote in an email shortly after the arrests.

Sweeney described his first night in custody as the most terrifying experience of his life.

“It was very, very frightening,” he said after landing in St. Louis, Mo. “They said they were going to shoot us soon. We spent nearly six hours that night in nearly fetal position, sort of, with our hands behind our backs.”

The next day, Sweeney, Porter and Gates were moved to a public prosecutor’s office, where U.S. General Consul of Cairo Roberto Powers was able to meet with them and arrange for legal help.

After a hearing Thursday, Nov. 24, an Egyptian judge decided not to charge the three students and ordered that they be released, giving Sweeney’s family what they described as an incredible Thanksgiving gift. The three students were released and escorted to the airport Friday, Nov. 25, returning to the United States on separate flights.

“I cannot wait,” Sweeney’s mother, Joy, told The Hoya when she first heard that her son had been released. “I couldn’t be happier.”

When he landed in St. Louis, Sweeney was met at the airport by about 30 friends and family members cheering and holding signs. He appeared on The Today Show and was interviewed about his experiences by media organizations across the nation in the days following his return.

But University President John J. DeGioia said Sweeney’s participation in the protests was unacceptable when he spoke to campus media at the beginning of the spring semester.

“There are very clear instructions for our students studying abroad as to what’s permissible behavior for guests in the country at the time,” he said. “Our Office of International Programs performed in a heroic way during that weekend, because it was a very, very tough period.”

When Egypt’s revolution began in January 2011, the university evacuated all 15 students who had been studying abroad there. The program was reinstated in the fall despite continued unrest in the country.

Though parliamentary elections took place earlier this year, discontent remains with the ruling junta, the Supreme Council of the Armed Forces. According to Amnesty International, the council has committed human rights abuses — from trying civilians in military courts to killing protesters — comparable to the brutality seen during President Hosni Mubarak’s rule.

For Sweeney, however, his ordeal in Cairo has swiftly become a memory.

Though the university did not accept any transfer credits from his semester in Cairo, he said there have been few lasting repercussions from his detainment in Egypt.

“In the grand scheme of things, it’s not really a big deal,” he said.

Sweeney added that his experiences in Cairo have continued to shape his life philosophy. He is taking a class on government and ethics this semester and sees many connections between the class and the revolution in Egypt.

“I guess I feel like I have some personal experience,” he said. “I’ve felt a stronger resolve.”

He is also still in touch with friends from his semester at AUC. Sweeney said he visited Porter, who he said is doing well, in February.

After his homecoming in November, Sweeney told The Hoya that he was still determined to return to the Middle East. A semester later, he maintains that he wants to go back someday.

“It’s a beautiful place. I’m not sure if I’m legally allowed to go back to Egypt, though,” he said, laughing once more.