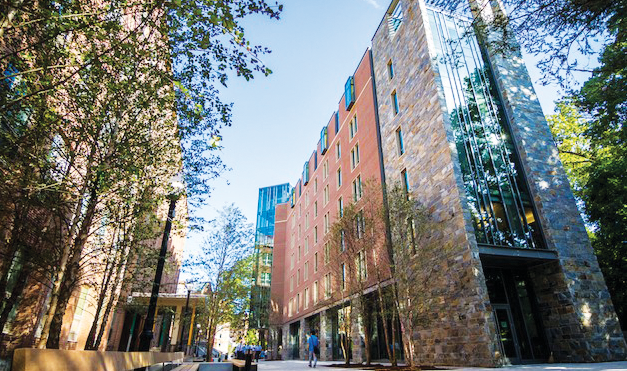 Interior doors throughout Arrupe — including those to common rooms, study rooms, kitchens and the laundry room — take more than five pounds of force to open and lack automatic “Push to Open” buttons, per the team’s findings. In their current state, these doors violate a provisionof the ADA that holds that interior doors without automatic buttons cannot surpass the five pounds of force threshold.

Senior architect Amy Sanderson in the Office of Design and Construction confirmed that the doors in Arrupe are not ADA compliant.

“It is true that there are a bunch of them that are not compliant,” Sanderson said in an interview with The Hoya. “Some are off a little bit, and some are wildly off.”

The ADA, which was signed into law in 1990, prohibits discrimination against individuals with disabilities in public life. The law requires public and private universities to provide reasonable accommodations to students with disabilities or risk facing fines and legal action.

Arrupe was designed to meet all ADA standards when it opened in fall 2016. The noncompliance issue likely developed over time as a result of maintenance to the mechanisms that allow the doors to close. All of Arrupe’s exterior doors, which feature “Push to Open” buttons, are ADA compliant.

“Georgetown is committed to ensuring that our campus is accessible and inclusive,” university spokesman Matt Hill wrote in an email to The Hoya. “When ADA compliance issues are identified we take prompt action to address them and make appropriate accommodations for individuals with disabilities.”

The failure of Arrupe to comply with ADA standards raises questions about similar flaws arising other dormitories, especially because the hall is Georgetown’s newest dormitory.

“Arrupe is our newest building. So, I know that we have issues there, and I am sure that we have issues in older buildings,” Sanderson said. “We are focusing now on the residential halls because we think that’s the most important place to focus right now.”

Evan Farrara (COL ’19) has been on the accessibility policy team since his freshman year and first spotted the compliance issue in Arrupe. Over the summer, Farrara noticed the doors in Arrupe were unusually heavy and, recalling the ADA stipulation, wondered if they might take over five pounds of force.

“I used to go study in the little study rooms, the meditation rooms, a lot, and so I remember that those doors were always so heavy, I remember one day my shirt got caught in the door and it actually ripped my shirt off because it was so heavy,” Farrara said. “And so, I was like, I bet that’s over five pounds.”

Farrara bought a door pressure gauge, a device that measures the amount of force needed for a person to open a door, and walked through Arrupe testing doors; his results showed doors varied significantly, with many of them requiring between 10 and 20 pounds of force to open.

Farrara reached out to the rest of the accessibility policy team, and they contacted the administration in June, kick-starting the process to put Arrupe in compliance.

The issue landed on the desk of Sanderson, who also tested doors throughout the building and came to the same conclusion: Doors throughout Arrupe were in violation of the ADA.

Right now, the university is in the process of having a hardware consultant who specializes in doors assess the compliance issues; the firm is set to begin that analysis in the coming weeks. Farrara said checking other dorms for this issue could be among future efforts for the accessibility policy team.

In some cases, the noncompliance stems from automatic closing mechanisms that have been installed too tightly, which can be fixed through adjustments by facilities, according to Sanderson.

Other doors, including those in the kitchens and laundry room, will require a more extensive solution and could delay the effort to bring the building fully into compliance. Sanderson is hopeful the process will be complete in the next few months.

The issues in Arrupe also raise questions of convenience versus compliance. For example, some wheelchair users are not able to open doors, even if they take fewer than five pounds of force.

Anna Landre (SFS ’21), who uses a motorized wheelchair and is living in Arrupe this year, has encountered this problem in her own residence hall.

“Look, I don’t care if it’s five pounds of pressure or not, I personally can’t open doors. Like I just can’t,” Landre said in an interview with The Hoya.

For students like Landre, compliance with the letter of the law is not enough to provide an equal experience at Georgetown.

“We shouldn’t be striving for that bare minimum,” Landre said. “We should be striving to make this a welcoming environment for all, which means making it not only compliant, making it convenient.”

For her, that means “Push to Open” buttons, which the university has agreed to install on the entrances to common spaces on her floor, as well as the building’s laundry room, which have not yet been installed.

The university strives to ensure that all students have a “good and equal” experience, but those effortspresent difficulties, particularly in making all residence halls fully accessible for students of all abilities, Sanderson said.

“Generally, our standards on campus go above and beyond what the ADA compliance laws are,” Sanderson said. “We’re trying to make the experience good for everybody.”