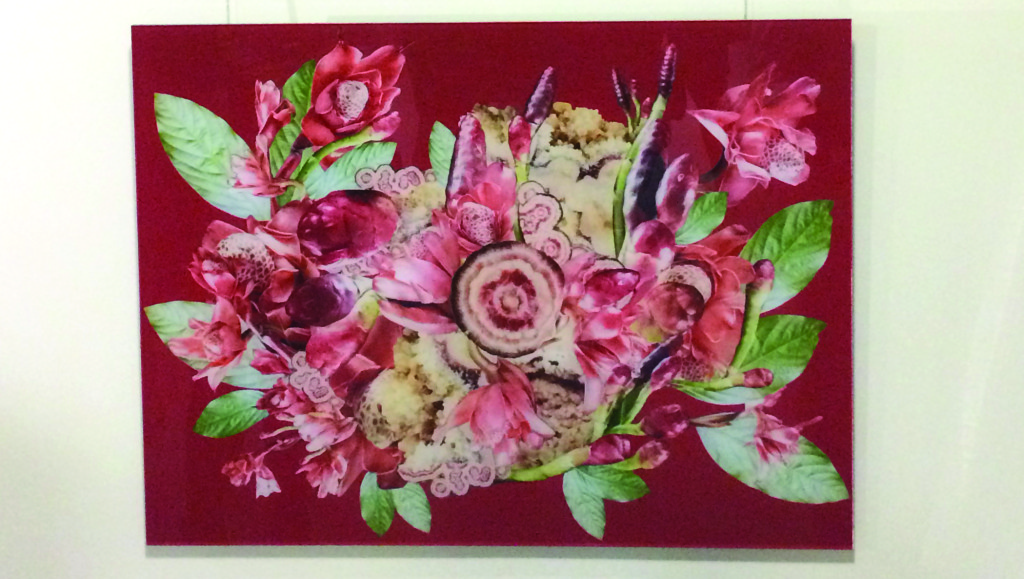 A commentary on humanity’s effect on the environment, a critique of materialistic trends in society and a testament to earth’s regenerative abilities, Denise Milan’s multi-faceted exhibition “Mist of the Earth” opened in Regents Hall on Oct. 18.

The exhibition, presented by the Science, Technology and International Affairs program (STIA) in the School of Foreign Service, brought the renowned Brazilian artist’s visionary style to Georgetown.  The show celebrates Georgetown Environment Initiative’s move to a new home in suite 391 in Regents Hall this year.

Beginning in 1999, the STIA program has held an annual Loewy Lecture, exploring topics of diplomatic engagement and the varied effects of new scientific and technological developments around the world.

Milan’s exhibit is divided into three different stages, with a clear progression mirroring the role of humans in the history of the world. It depicts the many changes that have happened over the course of civilization and alludes to ones that need to happen. Starting with “Paradise,” Milan provides a series of images and collages revealing constant interactions between different elements of the natural world, superimposing nature over human subjects.

The piece is carefully constructed tableau reflecting a deep human connection to our surroundings. A lady covered in flowers, breastfeeding her baby who rests on a bed of petals, shows the ability of nature to provide, as well as the ability of humans to coexist peacefully with nature. This introduction represents the world out of which humans arose.

“Paradise” is followed by “Paradise Lost,” a testament to greed, destruction and the overwhelming impact of human activity on nature’s delicate equilibrium. Images of nature being fundamentally transformed and aggravated, such as deforestation and droughts, show the destructive consequences of greed. A destabilized balance and structure pervade a series of compositions in which aspects of nature are destroyed, ripped apart or torn out of the to reveal a canvas covered in gold. The gold represents greed and desire — the senseless human drive for wealth that takes over —and invites perpetual destruction and disorder. In an attempt to “uncover gold” in all these images, humans are tearing the world apart.

“Paradise Recovered” is the culmination of Milan’s work, with stone and minerals the primary focus. The final segment is composed of a series of stunning images of different minerals and rock formations, delightfully colorful and structurally mesmerizing, meant to teach lessons of recovering balance and returning to paradise. This stems from Milan’s belief that understanding the universality existing in nature and minerals, in particular, can help guide humanity through an uncertain future.
“Our species is so fragile … If we learn from their structures […] maybe we can really learn how to endure,” Milan said in a panel discussion.

Milan is fascinated with the lessons that quartz can teach humans about diplomacy and cooperation. She referred to her work “Eye of Earth” – a round rock with a core made up of quartz – and said that quartz “unites us all, because it’s in 70 percent of the crust of the earth” and is “the center of our eye, looking to the universe, uniting us all.”

According to Milan, humans could prepare for an uncertain future if they realize the connections between nature and each other.

“We can more easily look for ways to survive, because we are coming from what is common,” Milan said.
The showing was followed by a panel featuring Naomi Moniz, Georgetown associate professor of Portuguese Emerita; Jerome Friedman, MIT Institute professor Emeritus and 1990 Nobel Laureate in Physics for the discovery of quarks, and Conservation International CEO Peter Seligmann. The panelists pointed to the consistently growing overlap between arts, sciences and diplomacy.

Friedman shared his reflections about breaking down barriers between science and art, noting that they are very similar, especially in matters of novelty and innovation. He encouraged audience members to be daring and engaging and to appreciate the connection between the two disciplines.

“In the creative process, science and art are the exact same thing.” Friedman said. “They both require very active imagination … You have to be able to break the rules of orthodoxy of the time. If science didn’t do it, you would never have new theories, new visions of the universe — if art didn’t do it, it’d all be very stable and static and never changing.”

When asked about the importance of connecting art and science, Seligmann, stressed the need to strive for collaboration in developing effective solutions to the environmental issues of our time. He also stressed the effectiveness that using art had in his company’s education initiatives.

At the panel discussion, Seligmann said, “Good art asks you to look deeper,” and “invites you into a conversation.” Such conversations are the ones prompted by Milan’s exhibit, leading to a deeper dialogue concerning the responsibilities of environmental stewardship. Through “Mist of the Earth,” Milan uses art to raise awareness so that, some day, humanity may rediscover paradise.