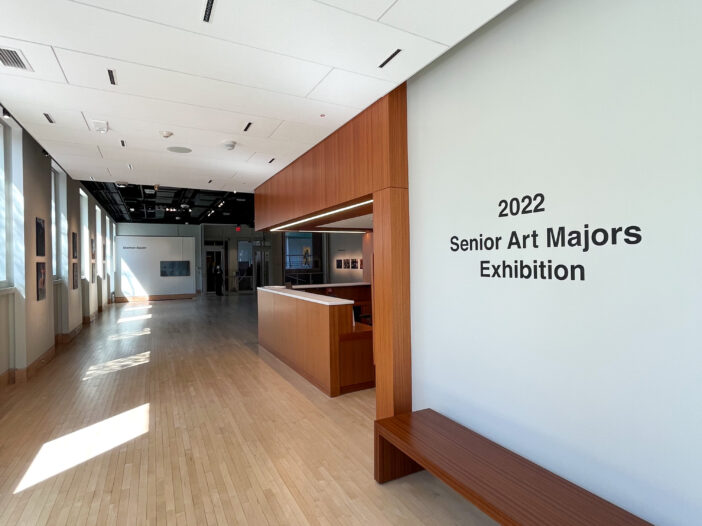 Graduating seniors’ artwork is on display in the Maria and Alberto de la Cruz Gallery to celebrate their skills and accomplishments.

The 2022 Senior Art Majors Exhibition, organized by the Georgetown University department of art and art history, opened April 21 and is on display through their graduation in late May. The display features artwork from the program’s three graduating seniors: Alexandra Bowman (COL ’22), Tyler McConville (COL ’22) and Daimon Squier (COL ’22).

The Senior Art Majors Exhibition began in 1960 as a collection of solo shows for graduating seniors in the program. While the showcase was initially hosted in the basement of Healy Hall, it has since moved to the Maria and Alberto de la Cruz Gallery, located in the Edmund A. Walsh Memorial Building, which has hosted the exhibition since 2019.

The showcase provides a special opportunity to see some of the artwork created by art majors on campus, according to Al Miner, founding director and chief curator of the Georgetown University Art Galleries and associate professor of the practice in museum studies.

“During most of the academic year, the GU Art Galleries bring work by highly acclaimed professional artists to campus,” Miner wrote to The Hoya. “The annual Senior Art Majors Exhibition is when we shift focus to highlight creative achievements by students.”

Alexandra Bowman, one of the featured artists, said she hopes her audience will use her political cartoons to examine political symbols and unpack complex, high-stakes contemporary issues.

“While focusing on American politics and environmental subjects, I criticize those in power and illustrate the human impact of their misdeeds,” Bowman wrote to The Hoya. “To illustrate my points, I use humor and express compassionate empathy for those abused by demagogues who exploit their power. I work to leave room for nuance, keeping cartoons civil by avoiding ad hominems and instead attacking substance and calling out concrete wrongdoing.”

Full Disclosure: Bowman is a former staff member of The Hoya.

One of Bowman’s works, titled “The Serpent Eating Democracy,” resembles the famous “Join, or Die” cartoon by Benjamin Franklin to present recent voting policy changes as a threat to democracy in the United States.

Tyler McConville specializes in photography and emphasizes composition, contrast and color to bring attention to the subject of the piece.

“Evidence,” “Possessions” and “Trash” are a series of photographs commenting on the abundance and consequences of overconsumption. According to McConville, their pieces aim to evoke discomfort and reflection from the audience and prompt thinking about major societal issues.

“Generally, my artwork communicates a critical perspective of the society and structures in which I live,” McConville wrote to The Hoya.

McConville said having their artwork displayed in a gallery is a special moment to commemorate the culmination of art students’ work.

“This is my first time having my work exhibited in a gallery,” McConville wrot. “It has been such an exciting and validating experience. My dad, stepmom, brothers, and grandparents all came down for the opening reception which was really special.”

Daimon Squier uses oil on canvas as his primary medium for his works, saying he prefers painting and drawing so as to display the strokes, marks and lines that compose an image.

“For the content of my work, I focus more on the suggestions of meaning and aesthetic qualities rather than a premeditated message,” Squier wrote to The Hoya. “For this series, I was drawn to the parallels between human, animal, and plant biology, but also wanted to instill an ‘divine’ or ‘otherworldly’ atmosphere.”

Miner said while each artist has their own techniques and styles, they all showcased their individuality through their artwork at the showcase.“Each has collaborated closely with their faculty advisor to select the pieces that best represent their signature style, the themes that are meaningful to them, and the techniques they’ve mastered over four productive years,” Miner wrote. “Seeing their work displayed side by side, both their uniqueness and what they’ve shared as a cohort is visible.”