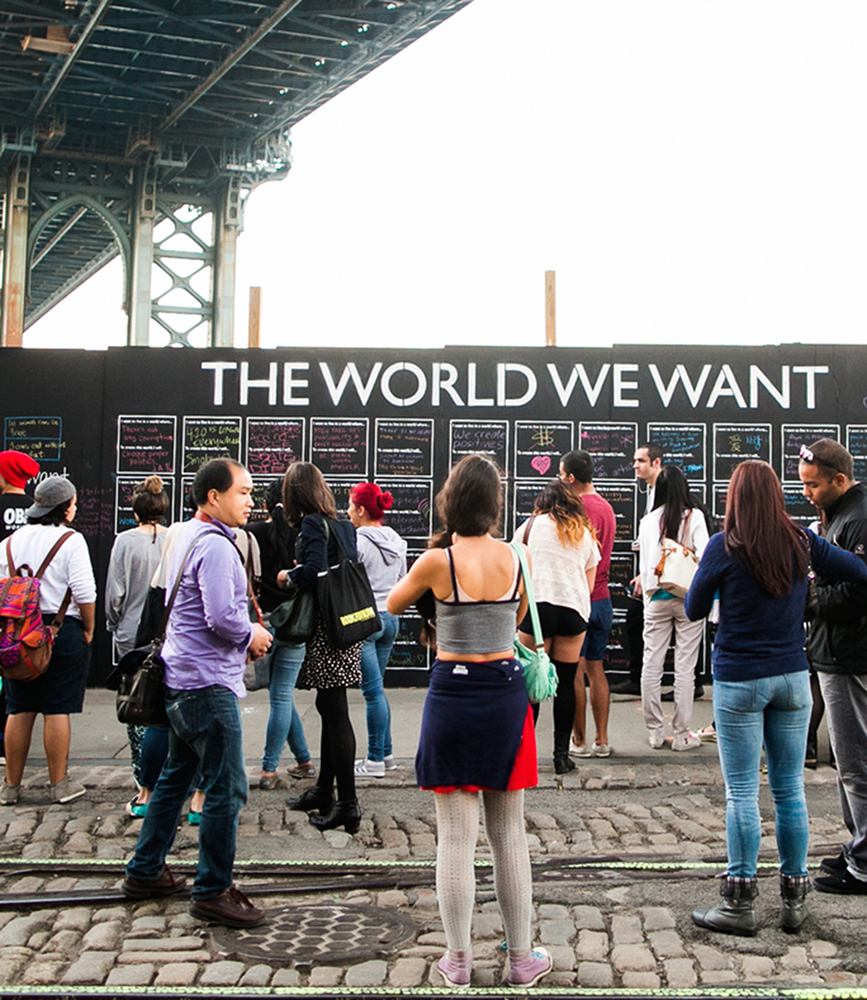 “The World We Want,” a public community art movement that originated in Brooklyn, N.Y., is launching hundreds of new projects around the world this month, including one on 11th Street NE and another on Martin Luther King Jr. Avenue in Washington, D.C. Sept. 18.

Participants write on chalkboard-like walls that display two prompts, reading, “I want to live in a world where…,” and “To create this world, I will.…”

New York artist Amber Rae created the first project in September 2014. One year later, this September marks the World We Want Month, with the opening of hundreds of new art installations. One wall in D.C. will be located east of the Potomac, in an under-resourced area with lower-income residents, many of whom have been removed from their homes as a result of rising prices. Local business Frager’s Hardware donated all of the materials required for the wall.

Think Local First, an organization that aims to represent the local business community and increase sustainable economic development, is one of the hosts, or “makers,” of the D.C. wall. Makers take a pledge to celebrate their commitment to bring their communities together and their attempt to lead by example through conscious action.

Think Local First Director Omeed Tabiei described the connection that the wall has established between D.C. communities on opposite sides of the Potomac, which are typically different in terms of income and lifestyle.

“As someone who lives west of the river, I have not heard of the community at large until I actually brought this project before their community and have gotten to know a number of people there,” Tabiei said. “I’m very thankful for that, because I’ve gotten a firsthand understanding of that community. … I don’t say that as the hero that’s going to be connecting these two communities, but that is ultimately what the goal of the project is.”

WithLoveDC, a movement that seeks to deepen community connections through events such as yoga and group projects, is also a host. Director and founder of WithLoveDC Heather Markowitz additionally highlighted the positive impact the wall will have on the D.C. community.

“It’s a platform for people to express their dreams and goals and ideals for the world that they want to live in, and also reflect on how they are a part of that change,” Markowitz said. “And how it’s one thing to wish for a better world, but another to stand back and recognize your place in it, and know that you’re also responsible for making the world a better place.”

Project Propel, the third host of the wall, is a startup company based in D.C. that facilitates programs for disadvantaged people in Manila, Philippines. One of its main projects is creating urban gardens and running health modules with community members. Project Propel Director Roberta Plantak stressed the importance of creating honest candid environments so a community can progress. She said this is especially applicable to a city like D.C., where issues of race, politics and socio-economic status arise everyday.

“This is going to create dialogue,” Plantak said. “D.C. is very overlooked in that regard. I really value community dialogue . … Each one of these gardens can feed, and provide a financial/job opportunity forh modules with commmembes all around. …We feel that this is a beautiful way to bring the residents of D.C. together to share their goals and visions for a better world, and to reflect on what each of us can do to take the steps closer to make these dreams a reality.”

After the walls open in D.C., any community members may sign it.