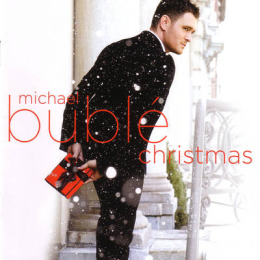 It’s finally December, and that can mean only one thing: It’s time for Christmas music! From now until Dec. 25, these classic tunes will dominate the airwaves, spreading good tidings and cheer to anyone and everyone — whether or not they want it. To meet this incredible demand, musicians from every genre release special holiday albums for their fans. Since hearing these tunes is inevitable, let’s at least look at what’s good and what’s not from this year’s flood of festive new releases.

Michael Buble, the smooth crooner behind hits like “Everything” and “Haven’t Met You Yet,” knocks one out of the park with his first full-length holiday album, the aptly titled Christmas. Buble takes many classic tunes to new heights, especially on the standout tracks “Holly Jolly Christmas” and “Christmas (Baby Please Come Home).” Buble demonstrates again and again that he has one of the sexiest voices on today’s musical scene, which is only heightened by the addition of throwback, jazz-inspired accompaniment with an infectious brass section that will leave you tapping your toes and embarrassingly dancing by yourself. When taken as a whole, Christmas is the strongest new holiday album of the season and is definitely worth a listen.

For fans of the movie Elf or the new sitcom “New Girl,” the sound of Zooey Deschanel belting out Christmas carols may not be entirely new, but when she and her musical partner Matthew Ward (who record under the moniker She and Him) dusted off their Santa hats, they created a unique and charming holiday album. Deschanel’s playful vocals coupled with Ward’s simple acoustic accompaniments create an amazingly retro vibe across the entire album, and many of the tracks, especially “Sleigh Ride” and “Rockin’ Around the Christmas Tree,” seem like they would have been right at home with my grandparents in 1950’s Middle America. Some listeners, however, may be put off by the duo’s insistence on using the ukelele on almost every track. Overall, A Very She and Him Christmas is a solid album and a great option for the pesky hipsters on your Christmas list.

A Ginuwine Christmas is without a doubt the strangest holiday offering this year. This album takes classic carols and adds generically manufactured R and B backbeats and sexualized lyrics, creating a poorly executed holiday mess. Check out “Christmas Day,” a charming little tune about “making love under the mistletoe” and “having you scream out my name” on the happiest day of the year. SinceGinuwine is clearly trying to make a “sexy” Christmas album, he should really take a page from Michael Buble’s book and not rely on awkward lyrics and artificially produced harmonies. Ultimately I would avoid A Ginuwine Christmas like the plague, unless you are as much of a glutton for punishment as you are for holiday food.

At first glance, another “Glee” Christmas album seems like the last thing we need this holiday season. But it is undeniable that when “Glee” gets it right, it really gets it right, and these cheery “high schoolers” are clearly naturally inclined toward these joyful holiday classics. Amber Riley belts out “All I Want for Christmas Is You” with a strength and presence far beyond her 25 years. We’ve all heard the song before, but Riley’s vocals add the vital magic that many versions fail to capture. Equally successful is Naya Rivera’s sultry adaptation of the classic made famous by Marilyn Monroe, “SantaBaby.” Practically every singer or celebrity looking for some “sexy” holiday publicity has covered this song, but Rivera’s version substitutes their blatant showboating for a more subtle and ultimately more rewarding performance.

Justin Bieber – Under the Mistletoe

This year’s holiday season has been blessed by a Christmas album from the permanently prepubescent pop prince Justin Bieber in the form of Under the Mistletoe. The album’s first single, “Mistletoe,” has already become a radio staple, and much of the album continues along the same vein with Bieber straining against his immature image — with some success — on more thoughtful tracks like “The Christmas Song (Chestnuts Roasting on an Open Fire).” Musical guests are everywhere with tracks featuring Usher, Mariah Carey and The Band Perry, but Bieber holds his own against their considerable talents. The lump of coal in this album is the strange reinterpretation of the classic “Drummer Boy,” which features Bieber rapping and a guest verse from Busta Rhymes, who inexplicably ends his verse with a call of “Happy Hanukkah.” Under the Mistletoe signals that Bieber may be able to weather his next few years as an artist better than expected.