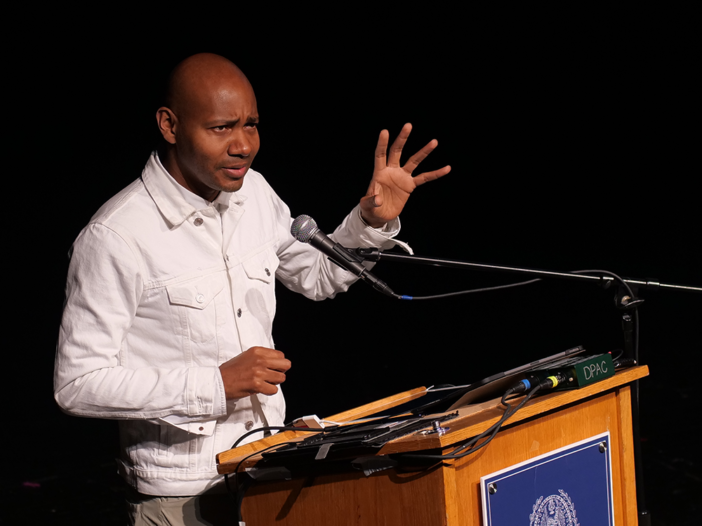 Climate change should unite all people regardless of race or ethnicity, multimedia artist and author Paul Miller, commonly known as DJ Spooky, said at a performance and discussion event Tuesday.

Miller, whose multimedia art strives to immerse audiences in a blend of genres, global culture and environmental and social issues, has previously worked on large-scale performances. His work includes a 2009 piece, “Terra Nova: Sinfonia Antarctica,” an acoustic portrait of the rapidly changing Antarctic continent. An excerpt of “Terra Nova” was featured in the Metropolitan Museum of Art in New York City for the 2012-13 season, among other works by Miller.

Miller highlighted the importance of recognizing climate change’s universal impact during the event.

“Whether you’re black, white, Asian, Latino, any particular ethnic group, it’s hard to argue with a storm that just smashed your house, or for that matter, a swarm of fires that burned your entire country,” Miller said. “These are issues that face all of us, and that’s something I’m gonna be kind of returning to throughout the course of this conversation.”

Humans struggle to comprehend the scale of climate change and its repercussions, which may explain why they continue to contribute to the global crisis, according to Miller.

“We’ve had experience with climate change as a species, but we’ve actually never made it ourselves in such a way that we are doing now,” Miller said. “We can’t necessarily think outside of the human cognitive frame, and that’s probably the problem with climate change because it’s such a large-scale structure that the human scalability of it is beyond everyday experience.”

Science and data can help artists accurately portray issues like climate change, according to Miller. “Terra Nova,” which included photographs and field recordings from a portable studio, exemplifies such a collaboration, he said.

“This project went to the Metropolitan Museum in New York and became a series of gallery shows and museum exhibitions, where I worked with climate scientists to look at how artists can use data to make a better portrait of this kind of changing process,” Miller said.

Miller’s recent project “QUANTOPIA,” which first premiered in January 2019, builds off of the idea of utilizing science, data and mathematics in art. “QUANTOPIA,” defined as the utopia of quantification, recognizes the free speech and creative expression involved in our daily media consumption, according to Miller. Combining music with data visualization, “QUANTOPIA” strives to create a new perspective on the 50-year revolution of information technology.

Music can also benefit from a greater connection with science and mathematics, as many forms of music can be understood as patterns of notes, according to Miller.

“If you can think about music as a pattern, anything goes: hip-hop, techno, dubstep, jazz, classical,” Miller said. “It’s about patterns, and the rest is about pattern recognition.”

The event, titled “QUANTOPIA Lecture-Demonstration,” was sponsored by the Georgetown University departments of performing arts and African American studies, as well as the Racial Justice Institute. The event is part of the Racial Justice: Art(s) and Activism lecture series, which honors Georgetown’s recent initiative to highlight art, activism and racial justice in the continued struggle to produce new forms of racial freedom.

“QUANTOPIA” is a relevant project to discuss in the Racial Justice lecture series because of the program’s focus on great wealth inequalities created by the internet, according to Miller.

“The internet, one could argue, has been one of the largest transfers of wealth in human history,” Miller said. “Most billionaires who are coming out of the information age are kind of dealing with that, and if we look at rising inequality throughout most American cities, California’s a good example. Berkeley or San Francisco, people are paying like $3000 to live in a box in somebody’s living room.”