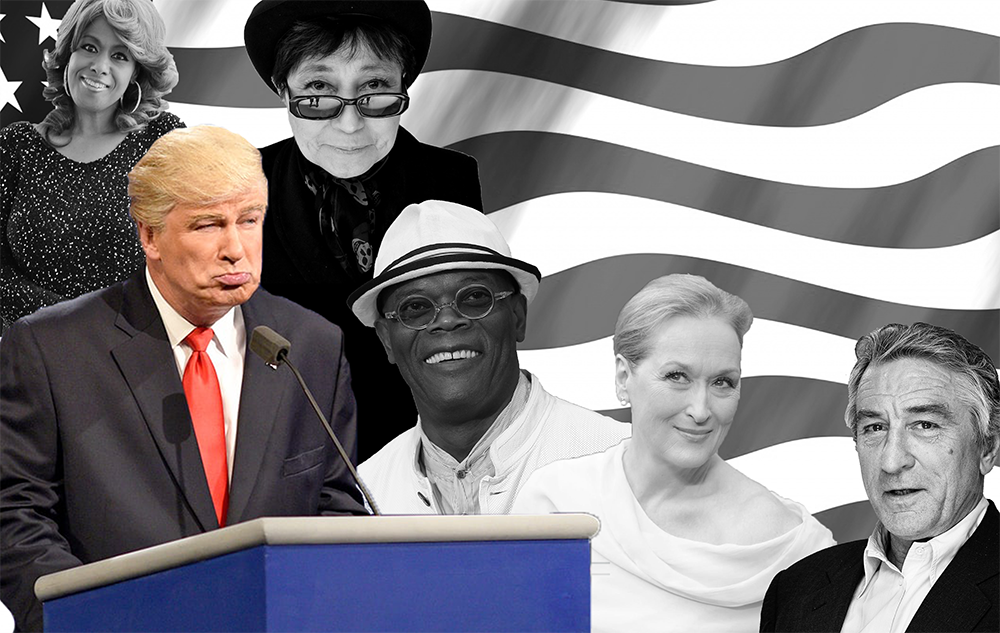 Art, as a form of public speech, is inherently political and engages with existing thoughts and ideologies. After a remarkably eventful year in the political and social spheres, art and culture have naturally adopted similar themes. From restaurants to comedy clubs to movie theaters, artists and public figures have been making their voices heard, contributing to an ongoing societal dialogue.

Members of the creative community were among the most vocal in expressing their feelings toward the inauguration of President Donald Trump this January. This election season witnessed sharp criticism of President Trump from Hollywood icons like Meryl Streep and Robert DeNiro. Local performers also took the opportunity to spark conversation about the election, with many participating in My America Artsfest: D.C. Creates – Innovates – Unites, a showcase that featured diverse poetic and musical performances. Washington, D.C., was also one of more than 34 cities that hosted shows for What a Joke: A National Comedy Festival. Benefitting the American Civil Liberties Union, the shows packaged their message of protest in humor and dialogue.

Inauguration weekend is one of the busiest times of year for D.C.’s service industry, drawing tens of thousands of visitors from across the globe. This year, two service industry veterans, Amanda Carpenter and Alaina Dyne, decided to use the occasion as a positive social platform. The two women launched All in Service D.C., a volunteer-led initiative committed to creating an inclusive environment for all of D.C.’s visitors. More than 105 local businesses in the Washington metropolitan area agreed to donate a significant portion of their inauguration weekend profits to an organization of their choosing. Notable organization included Planned Parenthood; Kids in Need of Defense, which advocates for the rights of immigrant and refugee children, and Ayuda, which works to provide social services to low-income immigrants. All in Service D.C.’s founders described it as a nonpartisan movement focused on compassion, and it succeeded in its mission of promoting empathy and diversity different venues across the city during inauguration weekend.

Comedic writer Jordan Peele’s directorial debut sparked a powerful conversation about race in America. A hybrid of piercing satire and gruesome horror, “Get Out” rapidly became one of the most critically acclaimed and commercially successful movies this year. Its racially charged commentary allowed for multiple interpretations as audiences across the country were shocked and stirred by its bold exploration of racial and socio-economic dynamics in American society. By employing direct allusions to slavery with a contemporary parallel of hypnotized black servants, Peele made a forceful statement that captured the American social zeitgeist and reminded viewers about the continuing existence of racism in American society. “Get Out” places bigoted discourses at extreme heights, emphasizing the continuation of violence based on racial prejudice. Alongside veteran actors Catherine Keener and Bradley Whitford, stars Daniel Kaluuya and Allison Williams craft an unforgettable and visceral depiction of black experiences in America.

After the disappointing, yet unsurprising, lack of diversity in the 2016 Academy Award nominations, associate professors Dana Luciano and Caetlin Benson-Allott offered thoughtful insights on diverse representation in Hollywood. Social and cultural powerhouse “La La Land” received 14 nominations, placing it among classics like “Titanic” and “All About Eve,” and marking the recognition of a predominantly white cast. For a story about jazz, a genre stemming from black and African musical culture, the cast featured a minimum number of black characters, rendering it a partial tale of a richly diverse cultural phenomenon. This year, however, the Oscars were noticeably more diverse. With movies such as “Moonlight,” which claimed the coveted award for Best Picture in an unforgettable television moment, “Hidden Figures” and “Fences,” the nominees and winners highlighted black heritage and its contemporary depictions with diverse casts. Despite this improvement, Luciano cautioned against a self-congratulatory mentality. “It continues to be a reflection of how behind-the-times awards are that that small number indicates a great amount of progress,” she said. Ultimately, these deficiencies are symptomatic of changing consumer film preferences, according to Benson-Allott, and their cures begin in the theater. “If we all went to movies by and about minorities, and those were the movies that were making the money, Hollywood would get in line,” she said.

In celebration of their 35th anniversary in February, the Black Movements Dance Theater presented “Defiance,” a thought-provoking show about the black experience in America. Through artistic exploration and exquisite choreograph, the concert examined complex subjects, such as racial inequality and police brutality, while boldly celebrating endurance and grace. Following the racialized debate of the 2016 presidential election and the stellar performances of black athletes in the 2016 Rio Olympics, “Defiance” delved into the complex duality of contest and triumph that minorities across the country experience. Embodying concrete issues through the universal medium of dance, BMDT navigated themes of defiance, grit and courage, unifying abstract meditations about the intensifying estrangement and division affecting American political and social identity. Under the guidance of artistic director Alfreda Davis, student directors presented the audiences with various forms of defiance, from contesting racial stereotypes to embracing inclusive standards of beauty.

In a masterful collaboration, the Black Theater Ensemble and the Mask and Bauble Dramatic Society presented “An American Daughter,” a riveting play by Wendy Wasserstein exploring the double-standards and gender biases women face in contemporary society. Through the enthralling tale of the highly publicized media scandal of Dr. Lyssa Dent Hughes, presidential nominee for Surgeon General, student director Caitlin Ouano (COL ’17) explored some of the most pressing issues surrounding gender barriers for women in America. The public image of Dr. Hughes is continuously twisted by the American electorate and sensational media coverage, clouding the nominee’s opportunity to demonstrate her credentials for the job. Instead, she is unfairly compared to societal expectations about how a woman in power should act. The play rigorously penetrated the unconscious preconceptions and prejudiced metrics under which women in America are constantly scrutinized. Due to a set of extraordinary performances and a stimulating script, the 20-year-old play struck audiences as hauntingly familiar and current.

Hip-hop duo Run the Jewels never fails to combine its forceful, high-energy sound with thought-provoking lyricism and a powerful message. The duo’s third album, “Run the Jewels 3,” however, is likely its boldest political statement. Members El-P and Killer Mike touch on the themes of loss, deception and corruption in the world of politics, incorporating personal anecdotes into their rap verses to create an authentic narrative. Although RTJ warns its listeners to be wary of trusting politicians, its overarching message is not entirely pessimistic; the duo project a sense of hope for the future of country, with Killer Mike even recounting his experiences working on Sen. Bernie Sanders’ (I – Vt.) presidential campaign. In fact, Sanders praised Mike’s “depth of passion, knowledge and commitment to community,” qualities listeners can instantly observe from the rapper on the opening tracks of the album. “Run the Jewels 3” has certainly earned its status as one of the most culturally resonant works of music released over the past year, rallying its listeners to resist against political oppression against all odds.

Album Review: ‘Pure Comedy’
The Hoya, April 19, 2017
Indie singer-songwriter Josh Tillman, better known by his pseudonym Father John Misty, released a pair of stellar albums since leaving band Fleet Foxes in 2012. A consummate artist, Tillman is beloved by fans and critics alike for his sarcastic lyrics, stylistic instrumentation and instantly recognizable croon. In his third studio album, which was released on April 7, Tillman aspires for even more, presenting a sprawling and scathing indictment of contemporary society and the irony of human nature. Accompanying the album’s release announcement with an extended think-piece on the symbolism and intentions behind the album, Tillman makes his ambitions clear. In fact, the opening and eponymous track is an extensive examination of religion, gender roles and capitalism. In the music video for “Pure Comedy,” which was also the album’s lead single, imagery of President Donald Trump and former President Barack Obama is intercut with clips from pop culture, reflecting the political and social commentary that has become increasingly germane in contemporary popular music.

Comedy shows have become an increasingly relevant medium for discussing social and cultural issues. Comedy Central’s “The Daily Show with Trevor Noah” is a perfect example of this, producing some of television’s wittiest political satire. In an exclusive interview with The Hoya, “Daily Show” correspondents Hasan Minhaj and Roy Wood Jr. discussed topics of free speech, race and the role of comedy in politics, particularly within the context of the 2016 election. Minhaj reflected on how “political culture has become popular culture,” as he and Wood described the role of comedy in bridging the two. “Comedy is a safe entry point into serious discussion. By keeping it lighter, you make the conversation more palpable and more productive,” Wood said. Minhaj and Wood also discussed their roles as minorities in the entertainment industry and highlighted the importance of representation and diversity in the media.

Folk singer-songwriter Arlo Guthrie is known for making “music with a conscience” similar to that of his father, famed American musician Woody Guthrie. He first took the stage in 1967 and continues to perform today, most recently playing for fans on his Running Down the Road Tour. This February, Guthrie discussed the tour, his past musical work and the current cultural climate in an exclusive email interview with The Hoya. He reflected on the reality that social media has largely taken over as the main platform of discussion for millennials. He nevertheless found solace in the fact that young musicians continue to write and produce, using their voices for good. Guthrie also took an interest in recent developments that showed music from the 1960s, 1970s and 1980s beginning to outsell newly released music and expressed his hope that songs and ideals from past generations will reach younger audiences. On the subject of artist involvement in politics, Guthrie advocated for free political and creative expression. “Democracy seems to work best when we allow people to express themselves,” he said.