Over the past decade, the ideaology of Islam has become the subject of controversy, but most people only have a superficial knowledge of this complex school of thought. Before one can knowledgeably discuss this dynamic religion, it is first necessary to immerse oneself in the rich culture that surrounds its belief system and native lands. “Arts of the Islamic World” is a permanent exhibit in the Freer Gallery of Art that gives viewers an opportunity to explore the religion’s regional background.

The exhibit focuses on the Islamic world’s three primary forms of artistic expression: architecture, arts of the book and arts of the object. This extensive range of mediums across an equally large swath of land, originating anywhere from Morocco to the islands of Southeast Asia, makes for a very diverse collection. This is only accentuated by the time frame that the pieces cover, from the early ninth century to the 20th century, and the fact that the museum has over 2,000 pieces that can be cycled in for display. 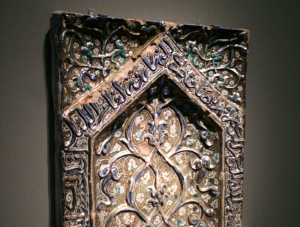 The mihrab is meant to be a mosque’s focal point, as it indicates qibla, the direction facing Mecca. Since Muslims traditionally pray in this direction, the mihrab serves an important purpose and is often one of the most detailed parts of the building. The panel is intricately designed with blue and gold engravings. The work on this particular piece makes it impressive to imagine the similarly detailed surrounding panels of the mihrab. These markings accentuate the actual inscribed verse from the Quran which aligns the triangular part of the mihrab indicating direction.

Aptly, the verse on this panel reads: “In the name of God, the Merciful, the Compassionate. Perform prayer morning and evening, and in the watches of the night. Behold, good works drive away evil.” The inscription serves not only as a reminder of God’s greatness, but also as a reminder of the prayer that the mihrab encourages. 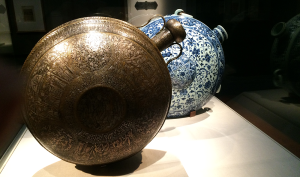 This piece is one of the most thought-provoking in the exhibit. The canteen reminds viewers that the exhibit is specifically of the “Islamic World,” as opposed to simply “Islamic Art.” The work reminds us further of the diversity that these regions represent. It does so through its inlaid carvings of silver that explore a plethora of Christian imagery with the virgin and child at its center. This image is circularly surrounded by moments from Christ’s life from the nativity to his entry into Jerusalem. Other images on the canteen also represent Christian saints. It iseems surprising that a piece of such Christian influence comes from a region that is predominantly Muslim. Many objects have been discovered with such Christian tendencies and it is most likely that they come from northern Iraq and Syria’s old Christian communities. 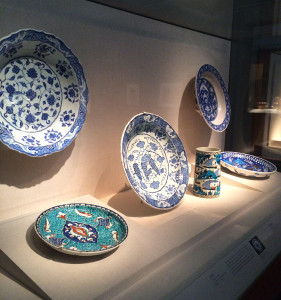 Much about these pieces attempts to imitate the characteristically Chinese blue and white ceramics of the Ming dynasty. Specifically, the displayed bunches of grapes are reminiscent of early 15th-century Chinese work. However, these Turkish works significantly contrast the Chinese ones in that they are made from stone paste and show a greater range in the images portrayed. In fact, just the dishes displayed that portray blue floral images, fruits and intricate geometric patterns are more complex than those of the Chinese. They also incorporate a more diverse color palette with differing blues, teals, and some shades of orange. Even the dishes that are simply blue and white seem to utilize their blues in a diverse fashion. That is, the blue is used in order to accentuate the empty space of the white, but it is also often used heartily as the focal point of the art. Again, these pieces present the diversity in the Islamic world as they display a distinct presence of Eastern influence. 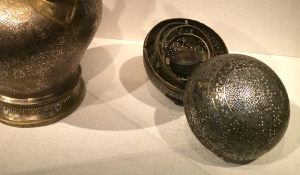 At first, it is difficult to guess what this seemingly perplexing contraption could serve as. However, it has been identified as either a hand warmer or an incense burner. Through a complex system of pivots and its two detachable halves, the gadget allows for the refilling of an internal fire cup and ensures that the cup stays upright. Of course, Middle Eastern weather is rarely cold enough for such things to be necessary, so it is suspected that it was intended for sale in the cooler climates of Europe. Not only is the mechanical design complex, the surrounding silver engravings also give off a sense of structured creations. The artistic design primarily utilizes continuous, contorted lines and small holes allowing for airflow that creates complexity that seems almost more difficult to comprehend than how the contraption itself works.