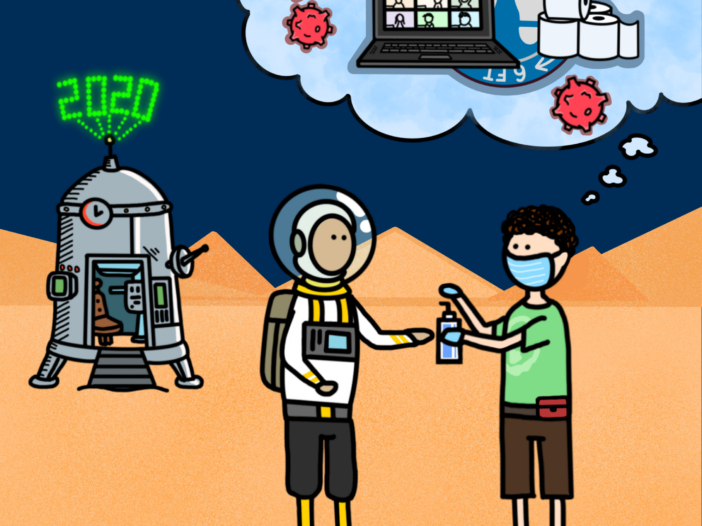 When Georgetown University students left campus March 6 for spring break, they could have never anticipated the next year would be dominated by virtual courses, club meetings and social interactions.

Georgetown ordered all classes to be conducted virtually starting March 16, 2020, shortly after the World Health Organization officially declared the COVID-19 outbreak a pandemic.

The beginning of virtual learning last spring was particularly difficult for many professors and students, as the virtual environment felt unnatural and very different from in-person instruction, according to Laurie King, associate teaching professor in the department of anthropology.

“Maybe the first month of doing Zoom classes, after every class I would be so incredibly exhausted,” King said in a Zoom interview with The Hoya. “I think it’s partly Zoom fatigue, but also I think just the anxiety of having to teach in this new format, in this new modality, and worrying about whether it was going to work.”

Over the summer, Georgetown’s Center for New Designs in Learning & Scholarship offered courses designed to prepare professors for virtual teaching in which 1,900 faculty members participated.

The CNDLS programming was helpful for professors to better understand specific Zoom features and develop alternative virtual teaching methods, according to King.

While students and professors have gotten more comfortable using Zoom, spending so much time online over the past year has been challenging, according to Genevieve Domenico (SFS-MSB ’23), who has lived at home since the transition to online learning last year.

“Human beings are not meant to sit in front of a screen all day looking at people’s faces,” Domenico said in a Zoom interview with The Hoya. “Zoom fatigue is real.”

While students have tried to maintain a sense of community through online club meetings and campus organizations, these events can contribute to Zoom fatigue, according to Domenico.

“I joined one to two clubs this semester, but I feel like the ones I did join were community oriented because I was looking to stay in touch with the Georgetown community and potentially meet new people,” Domenico said. “It is just another Zoom to go to at the end of the day.”

In addition to Zoom fatigue and social disconnect, the pandemic has brought additional stresses to many international students who faced uncertainty about visa applications and were forced to take virtual classes with large time zone differences.

For international students, varying time zones mean classes might be held anytime throughout the night, according to Theodore Chia (SFS ’23), who was living at home in Singapore until this semester.

“I think I kind of burned out once fall hit because of the difference in time zone, the amount of club activities that were happening and things that were happening in Singapore as well,” Chia said in a phone interview with The Hoya. “I think it was quite unsustainable, so I think midway through the semester I just burned out. I just didn’t do very well for the rest of my academics.”

This semester, Chia moved back to Georgetown’s campus, where he is able to complete his schoolwork without concerns about a time difference. Life at Georgetown is not the same as it was before the transition to virtual learning, however, according to Chia.

“The biggest challenge has been interaction in my studies. I think it’s kind of sad that a lot of my friends are going to be graduating a year or a semester early, and it’s also making me wonder whether I want to stay in Georgetown for the full four years,” Chia said. “I’m not really sure whether four years is still worth it at Georgetown anymore.”

For other students, however, living on campus has provided access to different study locations and allowed for a more normal routine, according to Jennifer Linares (COL ’23), who has been living on campus since the fall.

“It’s definitely been beneficial, being able to have space where I know is my school space and having access to the library,” Linares said in a Zoom interview with The Hoya. “Being able to have a normal routine that I didn’t really have at home has allowed me to focus a lot more than I was able to at home.”

When the university closed last March, Linares moved back home to Miami, Fla., where she found it very difficult to focus on her schoolwork. When Linares applied for on-campus housing for the fall, she was originally denied before later being accepted and said she was concerned about living at home until the university brought all students back.

“It was really, really hard. At that time my mom was working at home, so it was just a lot of noise, and I could not really concentrate,” Linares said. “I do feel that, to a certain extent, professors were a little bit more lenient than they would have been if we had continued normally, but I do think that’s changed.”

For first-generation and low-income students, the experience of virtual learning during a pandemic differs from other students’ experiences with additional resources, according to Linares.

“It’s tough, and I feel like someone who doesn’t come from that kind of background can just say, ‘Ok, I will just take a gap semester, and we will see what happens,’” Linares said. “Whereas that’s not really an option for low-income students.”

For seniors, continuing in a virtual learning environment this academic year has been especially challenging, according to Lily McGrail (COL ’21), who studied abroad during the fall semester of her junior year, leaving her with limited time on campus before the university shifted to a remote setting.

“I was only on campus for less than two month before we went virtual,” McGrail wrote in an email to The Hoya. “I can’t believe my last two years at Georgetown were just two months of being on campus.”

In addition to missing their final year on campus, seniors will also miss out on in-person commencement ceremonies. The university plans to hold all commencement ceremonies virtually this year, though campuses are currently working to develop small, in-person events for graduating students if public health conditions allow, according to a March 23 email from University President John J. DeGioia (CAS ’79, GRD ’95).

To retain some normalcy, many Georgetown students have moved into the neighborhoods surrounding campus. Some have also moved into Washington, D.C. hotels, which have become dorm-like buildings for some first-year students. McGrail and her roommate rented an apartment to be close to campus for their final year at Georgetown, which has helped them feel less isolated, she said.

“It makes a world of difference to see friends in person, albeit socially distanced,” McGrail wrote.

While students are facing unique difficulties, many have one thing in common: a shared desire to safely return to normalcy in the fall and a burnout from virtual learning, according to Linares.

“It’s really, really harsh. I feel like you never even get a break or a day off because if you’re not in class, you’re doing work on your computer, or if you’re not doing anything school related, you’re in a club meeting,” Linares said. “I think it’s really problematic to kind of hold all students to a high standard when a lot of them just are at home and just need a break.”