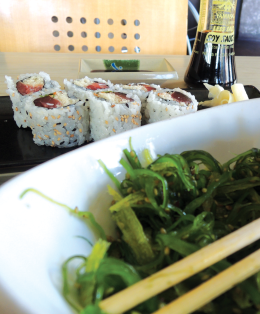 Raku is an example of how quality need not be compromised for quick service and accessibility. Just a few steps from where the Dupont Circle GUTS bus stops, Rakuoffers a convenient lunch or dinner spot eve on a busy weekday. Although the menu and the presentation aren’t terribly inspired, everything is prepared with an attention to detail that makes this irrelevant.

The seemingly ordinary spicy tuna rolls are a medley of crunchy tempura flakes and perfectly marinated spicy tuna. And while tuna at other places is often veined with fatty tissue that adds an unpleasant chewiness, this tuna was extraordinarily tender and offered a textural contrast to the sticky rice and seaweed. Raku has changed expectations of what Japanese food should be, and at a reasonable price of less than $15 for a meal.

Indian cuisine is often presented with little flourish and a traditional subtlety of flavor that a newcomer might miss, but celebrity chef Ashok Bajaj has changed the Indian food scene in Washington, D.C., adding his own contemporary flair.  Rasika West End also represents the diversity of the Indian subcontinent.

The Goan Shrimp Masala, for example, hails from a Southwestern state with Portuguese influences. The slightly sour masala, similar to a marinade, is a lip-smacking blend of malt vinegar, black pepper, cumin and garlic. The reshmi kebab is a North Indian/Pakistani dish with delicately spiced, minced chicken with accents of mint, coriander and green chili.

Another Mughal-influenced dish from that region, Dum Ki Biryani, requires extensive preparation, so order early. Slow-cooked basmati rice simmers under a bed of saffron and traditional spices, allowing the juicy mutton’s flavor to lightly infuse the dish with its unique flavor.

Desserts are sometimes overlooked in an Indian restaurant, but if you sample some of the spicier flavors, you’ll need the calming sweetness of these treats. Try the gulab jamun, piping hot doughnut-like balls soaked in a light rose-flavored sugar syrup, with cardamom ice for a satisfying end to your meal.