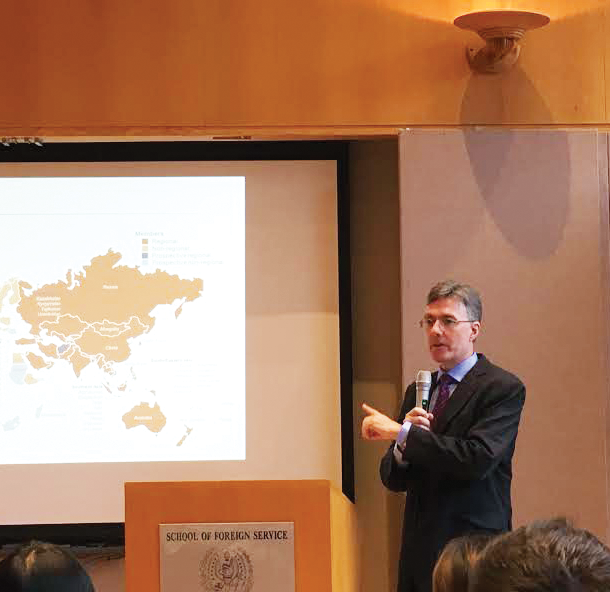 Headquartered in Beijing, the AIIB is a development bank working to expand and build infrastructure in Asian-Pacific nations.
Von Amsberg, who formerly served as vice president of development finance at the World Bank, said long-standing multilateral development banks such as the World Bank have failed to reform their governance and structure to reflect the rise of emerging economies.

“It has been increasingly difficult to adjust the governance of existing institutions to that changing weight of economies in the world,” von Amsberg said at the lecture co-sponsored by the Asian Studies Program, the Georgetown Anti-Poverty Society, and the Master of Science in Foreign Service Program.

Von Amsberg also noted that some Western G-7 countries, which drove the creation of institutions like the World Bank and currently hold large amounts of their shares within them, are reluctant to give up their position and influence of leadership on these banks.

By contrast, only 25 percent of the AIIB’s shares are held by non-Asian countries. China holds 25 percent and the remaining 50 percent is owned by other Asian states, which make up the rest of the bank’s 80-country membership.

Von Amsberg said that, despite its significant position, China cannot act as a dominant player within the institution.

“Of course it’s very important that [China] is our largest shareholder,” von Amsberg said. “But it’s not dominant, and, in fact, it can always be outvoted by other shareholders, which I think is a very important part of the multinational governance.”

Von Amsberg said this distribution was the result of commitments from the AIIB to ensure true multinational governance and high-quality standards for investing, prompting Asian and European partners to join the bank in 2015 despite U.S. pressure. This downplayed earlier concerns over Chinese President Xi Jinping’s intentions to use the bank to undermine other MDBs’ influence.

“Of course, AIIB can and should be seen as a broader picture of China’s growing role in the world,” von Amsberg said. “China is complementing its bilateral investments, or direct loans, with a multilateral engagement, as most developed nations do.”

With the need for $93 trillion over the next 15 years for global infrastructure projects, von Amsberg said the AIIB is another part of the solution to solve the Infrastructure Investment Paradox — the phenomena where supply and demand for investment funds in the global market do not coincide.

AIIB is attempting to tackle the issue by committing to the creation of sustainable infrastructure projects that connect countries across international borders and to the mobilization of capital to meet the demand of emerging markets.

Von Amsberg said banks like his complement others, like the World Bank, in funding sustainable infrastructure projects.

“I’m not saying one model is better or worse. I’m saying we are consciously designing ourselves to complement the existing institutions rather than replicate them because we think that’s a more important way in which we can contribute,” von Amsberg said.