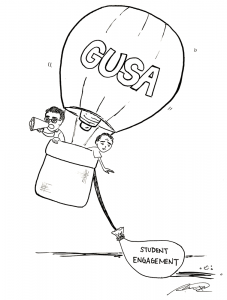 Joe Luther (COL ’16) and Connor Rohan (COL ’16) are unconventional leaders. By running a campaign satirizing the whole process, they won the backing of students tired of a staid Georgetown University Student Association with the promise that the body could be something different. Thus, they assumed the roles of GUSA president and vice president with little policy direction.

Midway through their term, Luther and Rohan now find themselves at an evident crossroads, having thus far carried the traditional mantle of the GUSA executive as the primary student advocates — at the expense of the energy that roused the student body in February.

In an interview with this editorial board, Luther and Rohan stated a desire to rededicate themselves to galvanizing student engagement, handing off policy initiatives to their large, well-equipped staff and cabinet. For an administration that derived its legitimacy from the rare ability to make students care, it is important that they salvage student interest. Yet, despite their unconventional background, Luther and Rohan must strike a balance and still pay heed to the demands inherent to their positions.

The Good, The Bad

Luther and Rohan’s crowning achievement thus far is their preparation for the 2018 campus plan negotiations. Fuelled by an energetic “Let’s Not Get Screwed Again” campaign in April, they have negotiated increased representation on the Georgetown Community Partnership’s Steering Committee, adding two student representatives, as well as paving the road for collaborative relations with off-campus neighbors. While the long-term nature of campus plan negotiations limits the tangibility of their actions, they have set up a framework that future executives can use to achieve student goals in this issue area.

Perhaps the most visible gains Luther and Rohan have accomplished thus far have been in the areas of sexual assault and mental health policy reform — the two issues the ticket refused to satirize during their campaign, instead presenting a thoughtful, nuanced platform.

The fruit of tremendous effort and arguably their most significant achievement yet, the six-point memorandum of understanding with university administrators on sexual assault nonetheless remains a framework for reform that requires a commitment to implementation and further expansion.

Luther and Rohan have likewise taken meaningful steps in mental health policy reform; this semester has seen the first-of-its kind mental health forum on campus, featuring accessible university administrators, and the creation of the GUSA Mental Health Committee, contributing to an increase in necessary dialogue at Georgetown. Luther and Rohan should continue to cultivate a sense of communal responsibility on the Hilltop, considering advocating for increased funding for counselling services as well as the possibility of a peer support program.

Even after acknowledging the steep learning curve this administration faced, Luther and Rohan’s record on other significant issues has vast room for improvement. Sustainability, disability access and diversity remain pressing concerns on campus. Luther and Rohan’s goals on these fronts have been consistently less specific, leading to very little change thus far. By their own admission, they would do well to delegate tasks to those within GUSA who have the expertise to take lead on these issues in a decisive manner.

The most memorable part of the YouTopia campaign was that it was funny. Luther and Rohan made us laugh and made us listen. To Luther and Rohan, student engagement as an ideal was far more important than any policy proposal, and they promised to dedicate the same creativity to transforming student government into a relevant institution.

Their student government has certainly been relevant, as their policy achievements evince. Yet save for the occasional droll remark in weekly emails, GUSA, to the average student, remains the same dull and arcane organization as six months ago.

Such irony, thankfully, has not been lost on Luther and Rohan. How they plan to address their failure, however, may be cause for concern. In the coming months, the two hope to step back from a hectic meeting schedule and devote more time to engaging students with their administration’s central concerns. In their interview, the pair never made the exact nature of this reorientation clear. Both executives failed to propose specific and measurable steps for reinvigorating a politically apathetic student body. Although editorial policy recommendations like more Youtube videos may serve to revive student engagement, the responsibility of coming up with these policies lies with Luther and Rohan, as this is their area of expertise.

The Luther-Rohan administration’s return to their comedy roots is commendable and sure to enthuse students. But Luther and Rohan must ensure that this attempt to reinvigorate student engagement does not stall policy progress. Delegating tasks to knowledgeable staff and cabinet members is important but does not wholly suffice; the reality is that a GUSA executive’s presence carries significant weight in routine meetings as well as administrative negotiations. An engagement effort that requires Luther and Rohan to sit out of a portion of these functions must therefore demonstrate that their absence from the meeting room will be offset by their work outside of it.

In assessing Luther and Rohan’s performance thus far, some difficulty lies in the lack of precedent for a satire-turned-real GUSA administration. Their predecessors have been judged on detailed campaign platforms; their metric was comparative performance. In some ways, Luther and Rohan’s limited slate of campaign promises is refreshing — though they spent a longer time playing catch-up and learning how GUSA works early in their tenure, they have taken up new and recurrent campus issues in stride. Thus, Luther and Rohan’s evaluation must call back on what they promised: change — and in that regard, they have left much to be desired.

Both have undoubtedly brought a unique passion and energy to student government. Despite success in the areas of sexual assault policy, mental health and the campus plan, however, they have so far failed to change the system in significant fashion. Feeling the pressure to fit the mold of student body president and vice president, sitting in on meeting after meeting with the administration and doing their best to weigh in on every issue, Luther and Rohan have fit the bill almost too well.

Their decision to back away and energize GUSA should not come at the expense of substance, and the president and vice president must play a concrete role — one that they have thus far played well — that cannot be understated. Student activism can only go so far without institutional support, and it is the role of GUSA, as the channel between the student body and the administration, to not only reach out to and galvanize students, but also to support them throughout their entire fight.
Luther and Rohan have demonstrated a sincere commitment to the student body and, personally, have handled their unanticipated leadership roles with the trademark tongue-in-cheek humor that has yet to characterize their administration.

They graded their progress with a B-plus, noting significant change is needed, but their achievements thus far should not be undersold.
Their administration will run out of steam if they fail to engage the student body, but to fully devote themselves to that effort would mean neglecting the other demands of the executive position; to adhere to their ideals and students’ needs, Luther and Rohan must find a balance.