Rhino Bar and Pumphouse generates some notable — or hazy — memories for Georgetown students. For Alex Baker (MSB ’14) and Michael Norton (MSB ’15), however, Rhino is not just a place to get drinks with friends – it’s part of an entrepreneurial venture.

The pair’s new business plan is the Rhino Black Card, a membership card that gives Georgetown students a 25 percent discount on all drinks and allows them to cut to the front of the line at Rhino.

“Loyal customers were not getting the discount they deserve or expect,” Baker said.

The Rhino Black Card, which costs $100, was envisioned to be a “rewards” card, much like one someone would use at Safeway or CVS. 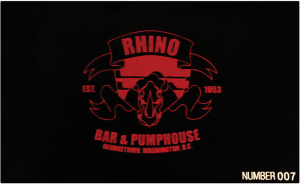 “We didn’t start it to raise money. It’s just for kids to get discounts for places they already go,” Baker said. “Not only does it help Georgetown students, but it also locks in customers for Rhino, too.”

Negotiations with Rhino to implement the card took seven months, Baker said, but both he and Norton are happy with the relationship they have formed with the bar’s management. Baker and Norton, both 21, declined to comment on how they are splitting profits with Rhino. Rhino’s manager is currently travelling and unavailable for comment, and the acting manager refused requests for comment.

In the past two weeks, Baker and Norton have sold 80 cards.

“We received three texts in the last 15 minutes asking for cards,” Norton said during an interview Wednesday afternoon.

With demand for Rhino Black Cards peaking, Baker and Norton are considering increasing the price and limiting the number of cards sold to 100.

Each card is made of steel, serialized and colored black to match Rhino’s colors.

To stop exploitation of the card in the form of “pass backs,” where a patron using the card would pass it to other friends at the bar, Baker and Norton said they have ensured that bartenders are aware of names and faces associated with each serialized card.

“There’s a system in place to prevent abuse,” Baker said.

Dean D’Ambrosio (COL ’15) was the third person to buy the Rhino card and lauded its value.

“It’s nice to know that you’re a valued customer … and if you go frequently for two years, you’re going to make the money [that you spent on the card] back,” D’Ambrosio said.

Other students are less interested in the card. Anne Jamison (SFS ’14) showed little interest in the offer, stating that her time spent at Rhino had come to pass.

“I would get it if I weren’t a senior and it worked at Tombs,” Jamison said.

Baker and Norton said that they are in the Rhino Black Card business for the long haul, and hope to create more cards for other Georgetown hotspots that cater to large amounts of Georgetown students.

“We plan on making it a legacy,” Baker said.