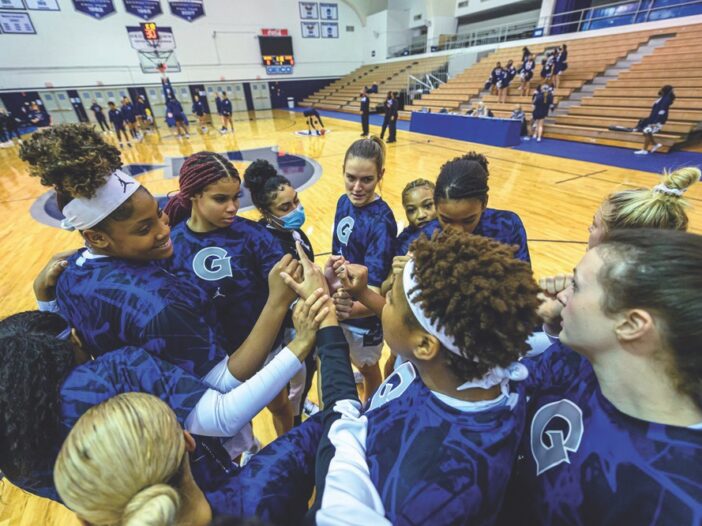 Georgetown women’s basketball players and students took to social media this week, advocating for equal treatment and expressing frustration over ongoing inequality following the university’s Jan. 20 announcement that fans would be permitted at the Feb. 3 men’s basketball game at McDonough Arena. In contrast, university guidelines prohibited fans from attending women’s games at McDonough throughout January.

When Georgetown instituted a policy suspending in-person, on-campus events to prevent the spread of the omicron variant, fans were barred from attending any of the women’s team’s five January home games played in McDonough, according to a statement issued Jan. 7 from Georgetown University Athletics.

However, fans have been permitted at Capital One Arena for every men’s basketball game, since off-campus locations do not fall under the jurisdiction of the university’s public health policies.

Georgetown Athletics intended to provide an off-campus opportunity for the women to play a home game at the Entertainment and Sports Arena for their Jan 1. faceoff against University of Connecticut, according to Barbara Barnes, the associate athletic director for communications. However, this game was canceled because of COVID-19 and was never rescheduled.

The university planned to extend the suspension of all on-campus indoor events — “with limited exceptions explicitly approved by university leadership” — until Feb. 11, according to a Jan. 24 email from University Provost Robert M. Groves.

Despite their strict adherence to the guidelines for the women’s team, Georgetown University made an exception for the men’s game Feb. 3. Georgetown Athletics announced in a Jan. 30 email to student season ticket holders that a limited number of students would be allowed at the men’s basketball game versus St. John’s.

The game had been moved to McDonough after the initial New Year’s Day game at Capital One Arena was postponed because of COVID-19 issues within the Georgetown program.

Fans will also be able to attend the women’s upcoming home game Feb. 9 against Seton Hall in McDonough, according to the email.

However, women’s basketball players and students alike expressed concern about the unequal attendance policies throughout January, especially amid the launch of the university’s year-long “Georgetown Women in Sports” campaign.

One of these outspoken athletes was sophomore guard Kelsey Ransom, who discussed her frustration in an email to The Hoya.

“I think there needs to be an emphasis on action rather than words,” Ransom wrote. “We appreciate the celebration of women in sports, but when there’s an obvious disconnect between what is said, and the actual intention to follow through, it’s disheartening.”

Dealing with gender inequality is nothing new for Ransom.

“Doing the same things as men, working as hard, and not feeling support from the community is deflating,” Ransom wrote. “As a team, we see and recognize the same people who support us each game and each season, and we love it, but I wish we and other women’s sports were supported as unconditionally as men’s sports.”

Also raising concerns in an email to The Hoya was Rachel Cherelstein (COL ’22), the current president of Hoya Blue.

“We hope that the university and collegiate athletics across the country take note of disparities like we experienced in January to do better moving forward,” Cherelstein wrote in an email to The Hoya. “Our goal is and has been to pack McDonough for both games.”

“We get almost weekly emails whenever the men’s team has a home game,” Cobb said. “But you never hear information about the women’s games — nothing.”

Cobb stressed that both teams feature student-athletes who deserve support from the university.

“This isn’t the WNBA versus the NBA,” Cobb said. “This isn’t some popularity contest. These are students that the university should be able to promote and encourage regardless of their gender or other identities.”

A comment from a university spokesperson read: “Because of the university’s approach to public health in January, spectators were not permitted at any on-campus events, including athletic events, through January 30. Because of existing competition schedules, the sports impacted were men’s and women’s swimming & diving and women’s basketball. Spectators were permitted to attend competitions held at off-campus venues (this affected Men’s Basketball games held at Capital One Arena and Women’s Squash matches held at Squash on Fire) so long as spectators followed public health measures required by those venues.

Starting this week and running through February 11, a limited number of students will be permitted at on-campus athletics events under strict public health guidelines. This includes both women’s and men’s basketball on-campus games. We are hopeful that after February 11, the University will be able to return to the same public health guidelines as the fall 2021 semester, and allow on-campus spectators through our campus visitor program.

For the on-campus events this week through February 11, the enhanced public health guidelines will include a vaccination requirement in line with other campus guests, limited capacity, restrictions on food and drinks and a requirement for masks to be worn at all times while inside McDonough Arena  Attendees should wear a properly-fitting, high-quality mask (e.g., N95, KN95), which are available for free at the entrances to many campus buildings.”

Ransom explained how she thought this could prompt necessary change.

“We did and we will continue to point out inequalities,” Ransom wrote. “I’m happy that this made people uncomfortable, and that now there’s an opportunity to create change. I hope we encourage women in all sports and women not in sports not to settle and to express their discontent, and to push for answers and change.”

Correction: This article was updated Feb. 7 to include comment from a university spokesperson.