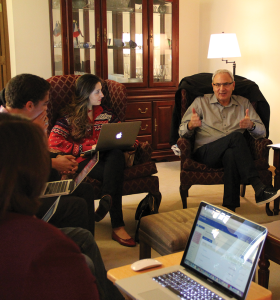 Professor Marilyn McMorrow’s 10 students sat on couches and chairs in her McCarthy Hall apartment discussing their final essays for “Just War Theory in the 21st Century.” It was the last week of the fall semester in an international politics course with a unique dynamic: two of the “seniors” in the course were over 65 years old.

These two experienced students, Chuck Cohen and Dr. Chuck Abrams, both 68, are members of the Georgetown Senior Citizen Auditor Program. Administered by the School of Continuing Studies, the nearly 30-year-old program has helped hundreds of seniors use their years of experience to contribute to the classroom while learning something new themselves. Over 50 seniors participated in the program in the fall, across all four undergraduate schools, according to Assistant Dean of Graduate Liberal Studies and SCAP Director Anne Ridder.

For Cohen, an attorney at Morgan Lewis’s Labor and Employment Practice, the class was a chance to learn and share some of his real-world knowledge with others.

“I’d attended three other courses at Georgetown before this one, and they have all been great experiences,” Cohen said. “The Senior Auditor Program has given me the opportunity to delve into areas that I’ve always been interested in.”

Abrams, a gastroenterology and internal medicine specialist, works at Abrams and Lipson MDs PC. McMorrow’s class was his second taken on the Hilltop, and he has since enrolled in an Eastern European History course for the spring.

“The ability to interact with bright, passionate young minds and welcoming professors has been a great opportunity,” Abrams said.

Depending on the professor, senior auditors can act as casual observers or actively participate in the class discussion.

In “Just War Theory in the 21st Century,” the senior auditors were a huge boon to discussion, according to McMorrow.

“We’ve discussed why the Geneva Conventions forbid the use of serrated blades in battle,and Dr. Abrams has been able to explain the medical reason behind this, and then we will go over international law concerning enemy combatants, and Mr. Cohen can share with us his legal interpretations,” McMorrow said. “Having them in class has really elevated the discourse.”

For the students in McMorrow’s course, the presence of the both Chucks in class has added to their educational experience.

“Besides their professional expertise, I really appreciated their humor and active participation in discussions,” class member Agree Ahmed (SFS ’15) said. “It’s nice to have people in the room who don’t spend their waking hours dealing with pure academic topics, and who have real-world knowledge on these subjects.”

Although senior auditors do not take tests or write papers, they are responsible for completing the reading and for the material discussed in class sessions.

Christian Chung (SFS ’15) agreed that Abrams and Cohen were integral parts of the class.

“Auditor is a misnomer in their case because they didn’t just sit back and listen –– they are just as active as any of us when we asked them for their thoughts,” Chung said.

“I like to think that Chuck and I helped keep things light and fun and were able to help put things in perspective and share our frame of reference on certain subjects,” Abrams said.

Ridder believes that these unique classroom experiences can positively affect the at times testy student-resident relations in the Georgetown neighborhood.

“Over half of our current auditors live in the 20007 zip code, so they are active members of the community, and they are all for us working together to help improve relations,” Ridder said.

Abrams’ perception of the students in his class was extremely positive, and he shared his admiration for his younger classmates.

“I’m so impressed with the breadth of knowledge and comprehension that these students had with challenging material,” he said. “I’m even more impressed that they were willing to be skeptical of the readings, to question the ideas of the authors and forge their own opinion on the issues.”