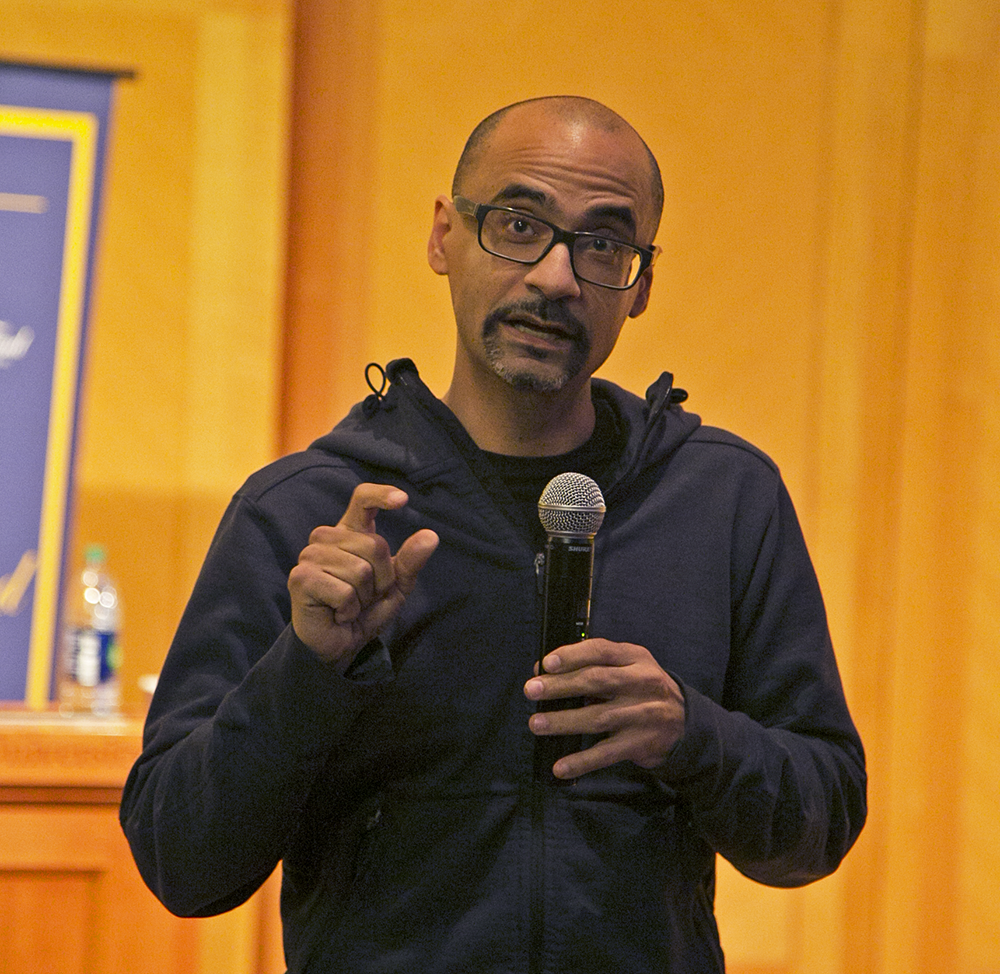 Solidarity and friendship within communities of color are key to overcoming racial prejudice, Pulitzer Prize-winning author and immigration reform advocate Junot Diaz said at an event hosted by the Georgetown University Lecture Fund on Monday evening.

Diaz is a professor of writing at the Massachusetts Institute of Technology and a 2012 recipient of the MacArthur “Genius” Fellowship, awarded annually to individuals in any field for “extraordinary originality and dedication in their creative pursuits and a marked capacity for self-direction,” according to the MacArthur Foundation.

The event, held in Lohrfink Auditorium, was cosponsored by the Provost’s Office, the Spanish and Portuguese Department and the American Studies Department.

Diaz was born in the Dominican Republic and immigrated to New Jersey with his family at the age of six. During his childhood, the Dominican Republic was still recovering from the dictatorship of Rafael Trujillo. This recovery, along with racism and the importance of “coming into modernity,” or the time at which societies determine what norms and rules of conduct are important to them, have been the recent focus of his art, Diaz said.

“I as an artist have become very much interested in people like myself who enter into modernity explicitly inside of a racial dictatorship,” Diaz said at the event.

The Dominican Republic has suffered a past riddled with racism, making it difficult at times for Dominicans to come to terms with their identity, Diaz said. In 1937, the Dominican Army massacred between 17,000 and 35,000 Haitians in what is now known as the Parsley Massacre.

Diaz is currently working on a book that addresses the uptick in neoliberal racism and the way societies come enter modernity. Neoliberal racism is the idea that we live in a post-racial world, and that the ideas of racism have been completely dismantled or blunted, Diaz said.

“Nowadays I’m thinking about how prophetic the regimes of oppression and exclusion on the island on which I was raised are,” Diaz said. “The violence within the Trujillo regime seems to have been weaponized, if only by coincidence, by the larger powers on our planet.”

“The Dominican Republic is one of the few New World African-descended nations that has an anti-black genocide at the center of its history,” Diaz said.

The idea that racism is no longer a prominent issue has manifested in an increase in white supremacy, Diaz said. Educational institutions that have curtailed their efforts to tackle racism have enabled attitudes of white supremacy to flourish, according to Diaz. The number of extremist hate groups in the United States has increased by four percent since 2016, according to a study by the Southern Poverty Law Center.

“The neoliberal evacuation of public education across the developed West has created an enormous opportunity for opportunistic ideologies like the kinds of white supremacies we are seeing to spread across the U.S., Western Europe and beyond,” Diaz said.

This evacuation is the culmination of the idea that there is no more work to be done with respect to racism, Diaz said.

While white supremacy negatively affects people of all races and religions, neoliberal racism is equally problematic because it means society is overlooking racial tensions, according to Diaz.

“We are in a society that seems less willing to engage in any type of critical race approach but has become much more enamored or addicted to racial oppressive agendas,” Diaz said.

In some ways, the identities of people with different non-white identities have fused into “things which the West fears,” often mobilizing “white supremacy factions and formations to make an argument that their sacred homelands and civilizations are under terrible threat,” Diaz said.

To prevent instances of white supremacy and neoliberal racism, it is important that communities of color band together and demonstrate solidarity with one another, Diaz said. Countries like the Dominican Republic and Brazil have convinced societies that their people are not black so that they cannot gain solidarity around their blackness and gain the power to rebel, according to Diaz.

A product of the confused identities perpetuated by a system of racial governance, the problems of white supremacy can become systemic, regardless of the presence of actual white supremacists, Diaz said.

“We’re just a bunch of white people in colored masks,” Diaz said. “Instead of building our solidarities and understanding that our solidarities are what’s going to overthrow this system, we’re building these wild exclusionary tactics.”

Balancing an identity built upon black culture with the desire to belong in a white environment can be difficult, especially at predominantly white institutions like Georgetown. As a result of this identity struggle, many students feel grief about going to Georgetown or similar institutions, Diaz said. However, Diaz believes this grief can be overcome through friendship.

“Find your dearest friends, people that can hold your pain, and grieve this place,” Diaz said. “Because otherwise it will have done its necessary work, which is to impair the people who are most likely to fix the system.”