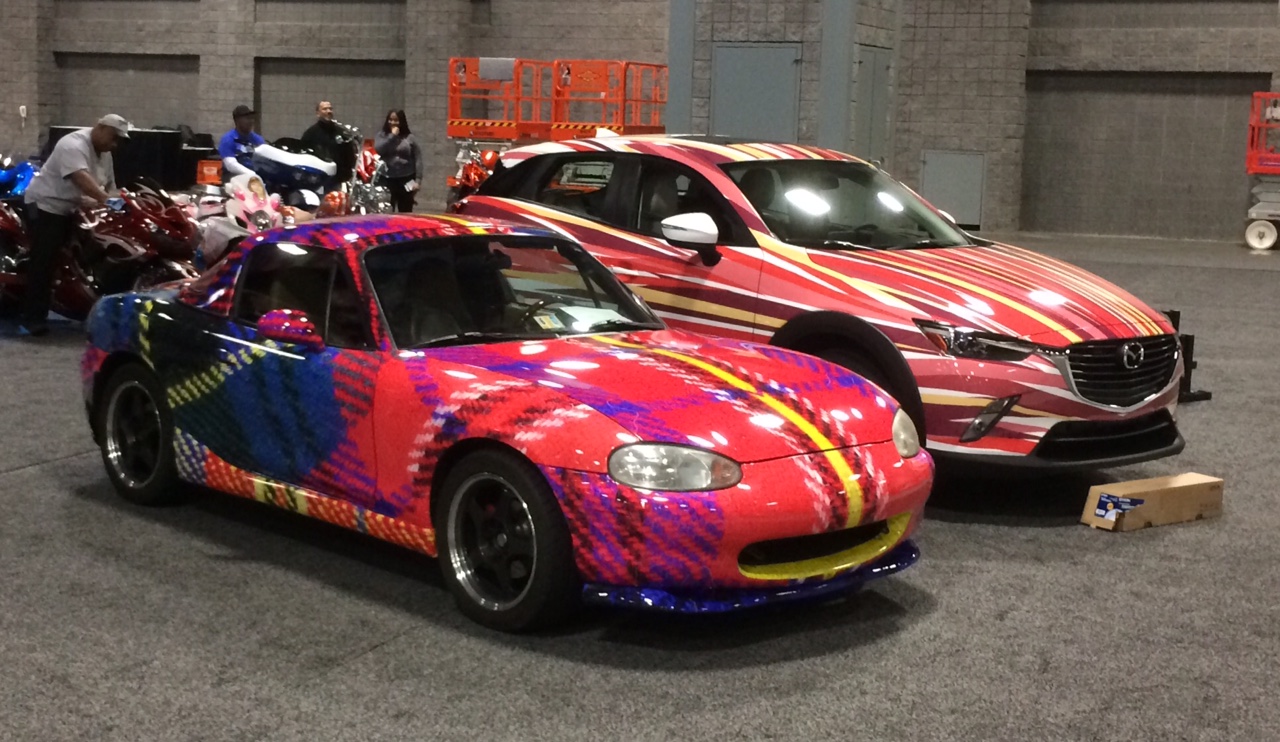 When the Washington Auto Show opens at the Walter E. Washington Convention Center today, artwork from 11 Georgetown University students and a professor will be displayed at two of the show’s exhibits.

The art project is part of a partnership between Mazda and Professor L. Collier Hyams’ Introduction to Graphic Design class that challenged students to create car exterior artwork relating to the theme “Kodo,” a Japanese word roughly translating to “soul of motion.” The Washington Auto Show is open to the public and runs until Sunday.

“It was the last thing I expected, to be honest,” Vernerey said of her pick as the top design. “I felt good about my designs, and I thought they looked cool, but there were other people in the class who were very artistic.”

“Flash” incorporates strokes of color that make the car look as if it is moving when it is stationary. Conceiving the design took Vernerey a little more than a week, but she said that once she got the idea, it took her about five hours to design it on the computer.

Vernerey’s design premiered on Dec. 5 at the Scottish Christmas Walk Parade in Alexandria, Va. and is on display at Mazda’s booth at the Washington Auto Show this week.

“I had zero experience with graphic design,” Vernerey said. “Like less than zero. I had never used Photoshop or Illustrator. I knew what it was, generally, but I had never actually used it.”

In addition to the two physical car displays at the Automotive Rhythms exhibit, nine students have their car art displayed on posters.

This is the first year that Hyams partnered with Automotive Rhythms and second year that he partnered with Mazda for a competition. During last year’s contest, the Intro to Graphic Design students at Georgetown created 100 designs celebrating the opening of Mazda’s new auto factory in Salamanca, Mexico.

Now in its third year, Hyams said that Georgetown’s Introduction to Graphic Design class has developed with age.

“It’s gotten stronger,” Hyams said of the class. “I mean, certainly when you introduce a new class, you go through some growing stages, growing pains.”

The introductory class has become so popular that the Department of Art and Art History added a Graphic Design II class this semester. According to Hyams, the demand for graphic design instruction is in part fueled by a desire to increase marketable skills that can carry over to other professional careers such as marketing.

“This is cyclical,” Hyams said. “You see this quite a lot. There are periods when students want to learn, explore, create simply for the sake of doing it. And there are other periods of time where students want to learn something that can be applied directly to the career path or making money. And I think that’s the environment of things for the last couple of years.”

Bennet-Engler said he took Hyams’ class as a means to explore a lifelong interest. He is currently taking Hyams’ Film Animation class and said he hopes to continue his design work in the coming years, especially after winning the Mazda competition.

Hyams said he hopes Georgetown’s partnership with Mazda will continue in the coming years. But for Hyams, his graphic design class is about more than competition. It is for the love of graphic art as well.

“I just got a message last week from a kid who was talking about how it changed her career,” Hyams said. “To me that’s just wonderful. So I think that there’s a sense of happiness and joy and accomplishment that’s really important.”