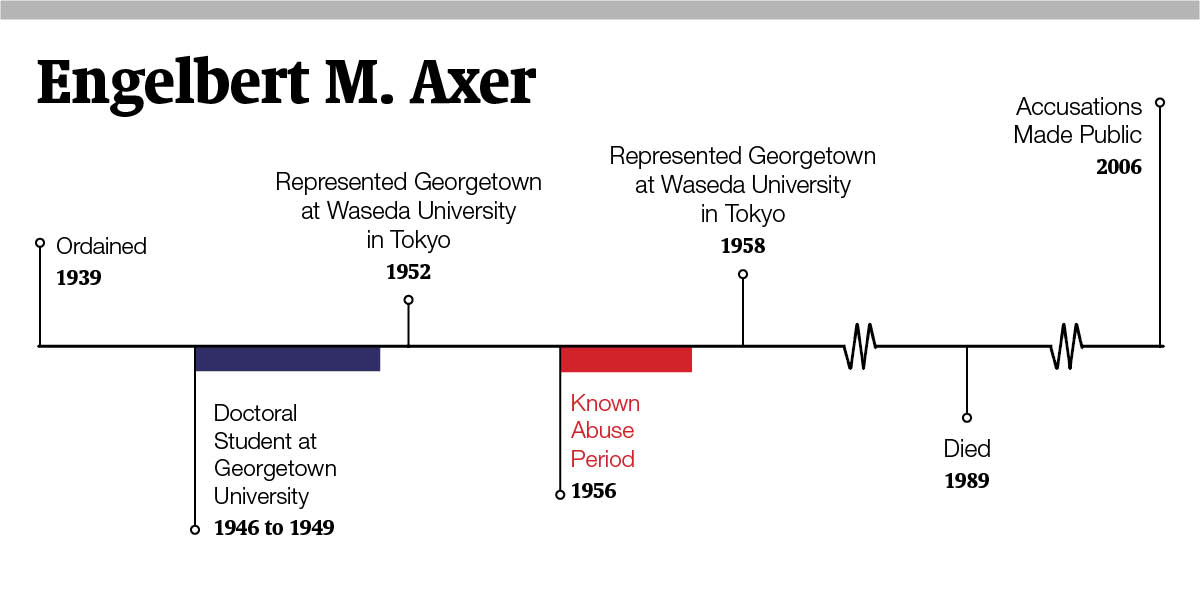 On Nov. 7, 1958, the University of Washington inaugurated Charles Odegaard as its 25th president. The speakers for the week’s events included luminaries from highly esteemed institutions across the country, such as the president of the University of California system, the editor of the Christian Science Monitor and the dean of law at Yale University.

Axer, who died in 1989, sexually abused a minor during a summer ministry program two years prior to the inauguration, an allegation made public in 2006 and deemed credible by the Seattle Archdiocese in March 2017.

Axer’s time at Georgetown as a professor and student began in 1946, and he completed his doctorate in 1949, according to university archival material. After graduating, Axer spent most of his career in Seattle, but maintained a relationship with Georgetown.

In addition to Odegaard’s inauguration, Axer represented Georgetown at Waseda University in Tokyo at Waseda’s septuagenarian celebration Oct. 21, 1952. He also served as chaplain for the Georgetown Alumni Club in Seattle, according to university archival material from 1962.

Two years after the allegation was deemed credible and 13 years after it was made public, Georgetown has not acknowledged its connections to Axer. The university first learned of the allegations against Axer in a March 1 email from The Hoya.

Axer’s second stint at Seattle University lasted from 1956 until 1987, though his legacy endured long after his departure. Until the accusation against him surfaced in 2006, the chairship of Seattle University’s philosophy department was named for Axer. Seattle University also hosted an “Axer Conference” in March 2001, where lecturers presented on a range of academic subjects such as literature and education.

When the Oregon Province of the Society of Jesus, which included Washington state in its domain, received the allegation in 2006, province officials alerted the faculty, staff and students of Seattle University, according to a Seattle Post-Intelligencer article archived by Bishop Accountability, a website dedicated to aggregating information about clergy accused of sexual abuse.

Fr. Stephen Sundborg, S.J., the president of Seattle University, vowed to support survivors and reconcile the university’s connection to Axer in a 2006 statement.

“It is profoundly important that we step forward and create an environment of acknowledgement and healing for both the victims and our community,” Sundborg said. “I am committed to reconciliation as both a Jesuit and President of Seattle University.”

Contacting the former communities of known abusers is essential to protecting survivors and creating a safer campus environment, according to David Clohessy, former national director of the advocacy group Survivors Network of those Abused by Priests.

“Step one has to be, first of all, aggressive outreach to anyone who is or was on campus when these dangerous men were put there,” Clohessy said in a phone interview with The Hoya. “University officials should first and foremost work very hard to publicly beg victims, witnesses and whistleblowers to come forward to law enforcement.”