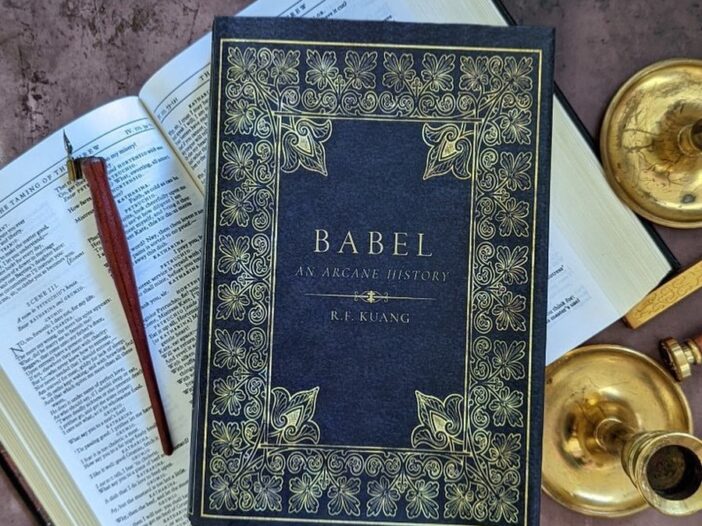 Grab your fountain pen, light your candelabra and prepare for a journey through the shadowy halls of the University of Oxford in Rebecca F. Kuang’s (SFS ’18) newest novel, “Babel: Or The Necessity of Violence: An Arcane History of the Oxford Translators’ Revolution.”

“Babel” follows Robin Swift, an orphan from Canton, China, who is invited to live and study in London by the mysterious Professor Lovell. After completing his studies in Greek and Latin, Robin enrolls in Oxford’s Royal Institute of Translation, housed in a glorious tower aptly named Babel.

Kuang paints a vivid, almost Dickensian, picture of 19th century London and Oxford, U.K., from the seedy industrial underbelly to the dazzling Gothic architecture. Kuang imagines an alternative history in which the British Empire is powered by magical silver bars that can achieve a variety of effects such as healing the sick, granting invisibility and powering industrial machines.

The power of the silver is unlocked by the translators of Babel, who use the intricacies of the language to activate the magic. The power of the bars, however, is limited to the rich and powerful English aristocrats who can afford them. This sets for an emotional, rich tale about the woes and dangers of English colonialism.

“Babel” is imbued with Kuang’s deep love of language, books and academia, as she guides the reader through the tangled weeds of etymology, linguistics, English politics and colonial history.

As the reader attends classes at Babel alongside Robin, Kuang manages to make lectures covering the theory of translation and linguistics feel lively and full of intrigue. Throughout, Kuang guides the reader along with footnotes, the contents of which range from commentary on Adam Smith’s “The Wealth of Nations” to side tangents illuminating the personal histories of the characters.

Robin quickly forms a close bond with fellow students at Babel, notably characters Ramy, Victoire and Letty. Kuang builds a loyal and loving relationship among the quartet that feels authentic, complex and utterly endearing. However, their relationship is strained by the racial and sexist prejudice flung at them from their white male peers and the exhausting burnout culture of academia.

The characters also undergo a different kind of transformation: assimilation. Robin, who is half- Chinese, Ramy, who is Indian, and Victoire, who is Haitian, are forced to conform to white English cultural norms to survive at the cost of losing their senses of cultural identity and native language.

“Babel” is also a masterwork in character development. Robin begins as a wide-eyed orphan desperate for a sense of stability, later transforming into a dedicated student struggling to rectify his complicated relationship with Oxford. Later, he is sharpened into a razor-edged revolutionary, determined to overthrow the institutions of exploitation that Oxford represents.

Kuang invites the reader deep into Robin’s psyche, questioning his moral values and forcing him to confront the nefarious origins of the academic world he inhabits. All the while, Kuang plays a game of deception: with one plot twist after the next, the reader is unsure which characters are friends and which are foes.

Before “Babel,” Kuang made her writing debut with The New York Times bestselling trilogy “The Poppy War,” an epic fantasy inspired by Chinese history. Among many themes, “The Poppy War” explores the devastation of war and colonialism. In “Babel,” Kuang finishes themes she first started in “The Poppy War” by unpacking the European colonial project with vigorously researched finesse.

At its core, “Babel” is a nuanced exploration of contradictions. Oxford is the setting of the best days of Robin’s life, days that he shares among beloved friends, but it is also a place that makes him feel unwelcome because he doesn’t fit the accepted mold: English, wealthy and white. While Oxford is an enchanting place of marvelous academic discovery, it is also a pillar of Britain’s cruel colonial project.

Babel was founded to train Englishmen in the languages of the empire’s colonial holdings — all to serve the interests of the British Crown. Contributing to the colonial exploitation even further, Babel uses the languages of non-European countries to unlock the power of the silver bars while hoarding all the gifts the silver bars provide. Robin grapples with this moral dilemma throughout the novel: he struggles to love a place that is embroiled in the exploitation of his native land and treats people like him with utter contempt.

“Babel” is an ambitious, enchanting and heartbreaking triumph of a novel that is both a love letter to academia and an uncompromising indictment of its crimes. Kuang prompts her readers to admire the beauty of academia’s shining towers, but also to interrogate the foundations upon which they were built.