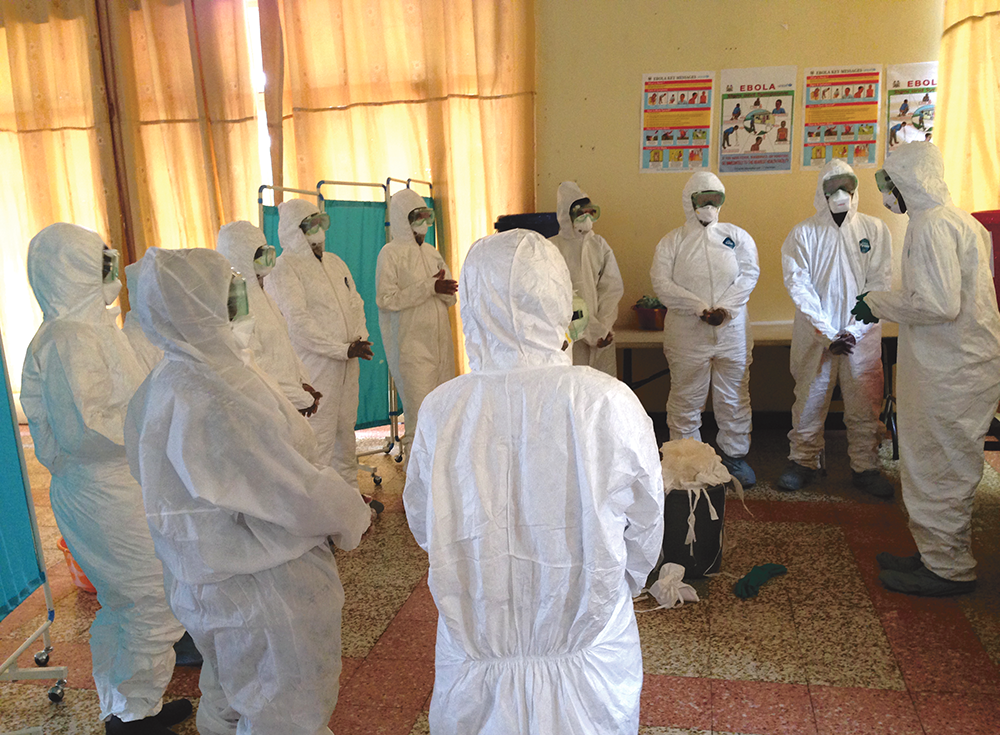 Georgetown will hold a symposium on the Ebola crisis on Tuesday in the Intercultural Center, featuring various doctors, policy makers and experts on infectious disease and global crises.

One perspective that the symposium will highlight is that of microbiology and immunology professor Daniel Lucey, who just returned from three weeks in Freetown, Sierra Leone, as part of the Ebola emergency response. He will soon return to Liberia, where he will work with Doctors Without Borders.

While on site in Freetown, Lucey gave training sessions twice a day on how to properly use personal protective equipment to prevent infection while treating patients. Lucey said that the lack of resources and poor equipment created some large health challenges and concerns.

“There’s no air conditioning, of course, and it’s summer in Sierra Leone and it’s the rainy season but it’s just hot, hot, hot. You put on all this equipment and you begin sweating profusely before you ever set foot into seeing the patients,” Lucey said.

“We have these little flimsy gloves that tear easily. We have goggles that have been re-bleached so many times that you cant see out of them, plus you sweat so much that they got fogged up but you don’t have any anti-fog spray. How can you work if you cant see?”

According to Lucey, many of the doctors and health care providers he worked with had friends and colleagues who lost their lives from Ebola. A group of nurses who have lost many colleagues to the virus travelled over five hours to attend the training session.

“To me, it’s very humbling offering this training to health care providers who already have colleagues who are dead from the virus, but they knew what they were getting into, because now everyone knows what Ebola does,” Lucey said.
Lucey said he hopes that the symposium will allow experts to learn from one another and collaborate in new ways.

“So many people at Georgetown have done so much good over so many years, and preparing and responding to not just infectious disease, but other humanitarian crises not related to infectious diseases and not necessarily related to health,” Lucey said. “It’s wonderful to be able to collaborate and play to this synergy of strengths that Georgetown has.”

The four-hour event will include opening and closing remarks and two panels entitled “Historical, Social and Political-Economic Reasons for the Devastating Impact of the Ebola Virus in West Africa” and “Where do we go from here: Greater Implications of the Ebola Crisis.”

The symposium will also include a Skype call with the president of Liberia, Ellen Johnson Sirleaf, who was scheduled to speak here at an African business forum in August that was cancelled as a result of the epidemic.

John Monahan (CAS ’83, LAW ’87), senior adviser to University President John J. DeGioia for global health and a senior fellow in the McCourt School of Public Policy helped plan the event, and said that he hopes it will help educate members of the community about the virus and its implications.

“The Ebola outbreak in west Africa is a catastrophe that has received widespread attention and that has profound health, social, economic and political consequences,” Monahan wrote in an email. “As a result, the planning team believed that a symposium would provide students, faculty and others with an opportunity to learn more about Ebola epidemic, understand why it has unfolded in the manner that it has and consider ways to mitigate the terrible impact of the virus on west African communities.”

“There are just a lot of students and faculty and others in the university community that are concerned about this, interested in this, want to better understand what’s happening and better understand what they can do,” Radelet said. “We thought that this was a good opportunity to bring together the various people that are working on it in different ways to try to inform the broader university community about what’s happening, why and where it might go.”

Radelet said that he hopes it will help motivate attendees to take action.

“Our goal is twofold, that the Georgetown community understands what is happening and the seriousness of what is happening, not only for West Africa, but how it effects all of us in some ways,” Radelet said. “The second, beyond just informing us better, at least for some people, it will spur them to more action of encouraging a greater response, whether it’s fundraising, writing to members of Congress, asking the White House to do more or encouraging a stronger public response so that people and organizations around the world will accelerate their efforts to move forward. That kind of action can be really powerful.”