The Hilltop and unconventional dietary plans do not always mix well. Students who are vegetarian, vegan, diabetic, allergic to nuts or living with celiac disease, among many other dietary restrictions, can find it difficult to navigate Georgetown while trying to keep track of nutritional concerns.

No one can deny that food is important. Physical and mental health often hinge on the variety and quality of the food one eats. It is not only what you put in your body but also why you do so and how you expect the food to benefit you. A doughnut may brighten my day, and baby spinach may boost my metabolism, but, for many students, finding a sweet snack or energy-producing alternative is not easy. That is why, starting this semester, I plan to delve deep into the world of food that exists on and off campus, attempting different diets and sharing my findings.

The most recently-acclaimed apotheosis of dietary plans is the highly-publicized paleo diet. This is also the diet I decided to tackle for the first two weeks of school. Despite its popularity, the paleo diet has been met with strong criticism, as many contest the diet’s long-term effectuality and sustainability.

There are many variations on the paleo diet, but the version I decided on is the Primal Blueprint’s “21-Day Total Body Transformation.” This dietary plan advocates stripping down food intake to bare essentials and pairing this painful process with a healthy dose of exercise and sleep. The website and blog that hosts the challenge, Mark’s Daily Apple, claims it is “a method for rejuvenating your health and revitalizing your metabolism.” Participants should “eat real food,” primarily lean meats, “avoid sugar, grains [and] unhealthy fats” and “align [their] carb intake with … [sustained] activity levels.” Taking into consideration my regular running habits, I decided to level my carb intake at around 100-150 grams.

Beginning the plan involved some unconventional shopping (recommended strongly by the website), primarily through the online platform Thrive Market, which offers a plethora of alternative, organic food options almost entirely unavailable in the D.C. area otherwise. Unfortunately, although I placed my order a week early, Thrive Market’s carriers had a hard time locating the Arrupe Hall RHO, and, hence, Trader Joe’s became the new, sole resource for the diet. Grocery shopping at Trader Joe’s limited my options considerably.

All of my primal shopping for the following two weeks amounted to approximately $95. A little disappointed at the nearly three-digit price tag, it was easy for me to see why many criticized the diet as unsustainable. Despite this, the diet proved fairly easy to manage when shopping off campus. A douse of extra virgin olive oil made for great grilled chicken, and eggs for breakfast never really get old!

As far as on-campus food options goes, the paleo diet was much pricier. I could eat virtually nothing at Epicurean and Company, and Vital Vittles’s raw food section packs a significantly heftier price than nearby grocery stores. Another downfall of this diet centers on college students’ typical caffeine consumption habits — no coffee allowed. Highly caffeinated drinks are frowned upon, given the diet’s claim to revitalize energy.

Quality kitchens were also a must-have for this diet, so, unless you live in an apartment or townhouse, you might be spending a lot of time in your common room sink, digging out dishes from a pile of a floormate’s old spaghetti. That being said, because everything is bought raw on the diet, a major portion of my day was spent cooking — a luxury many busy college students cannot afford and a considerable challenge to the sleep portion of the plan.

Despite never feeling particularly hungry, I found it difficult to feel satisfied. Whether it was due to some nutrient deficiency or a general longing for pasta, by the end of the first two weeks of the three-week diet, I found myself with all-consuming cravings. It eventually devolved into a Kafka-esque weekend in which food cravings left me with little choice but to claim my diet marked to die, throw my honor and pride to the side and sever my ties with all things Paleo. At least I now have more time to study.

So is a paleo diet at Georgetown sustainable? Probably not. 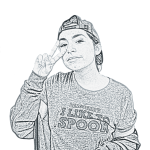 Nina Young is a sophomore in the School of Foreign Service. BAKE MY DAY appears every other Friday.