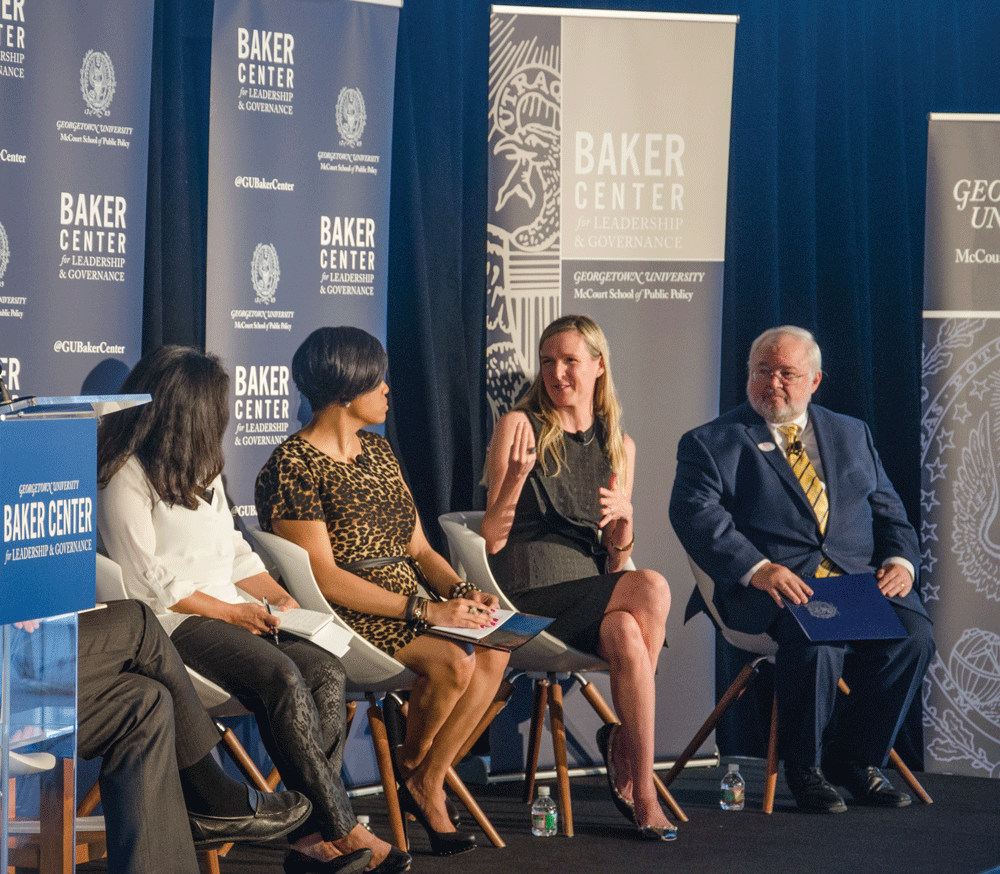 The Georgetown Institute of Politics and Public Service launched the Baker Center for Leadership and Governance, a nonpartisan initiative focused on discourse and original research, with a town hall Tuesday, which convened leaders in politics, media, business and religion in a discussion on restoring faith in American establishment.

The Baker Center is named for its benefactors Jon M. Baker Sr. (CAS ’64) and Patricia Baker. Jon Baker, who formerly served on Georgetown’s board of regents, received the university’s highest honor, the John Carroll Award, in 1991.

According to the Baker Center website, the center aims to spur dialogue among civil society and key institutions in the public, private and academic sectors to resolve global challenges through mutual trust and policy solutions.

The center, a facet of Georgetown’s McCourt School of Public Policy, plans to host an annual Baker Forum — a gathering of government, business, nonprofit and academic leaders.

Additionally, the Baker Center intends to support and publish independent research by both members of the Georgetown community and the greater public at large as well as hold regular policy roundtables to discuss the research, according to its website.

The conversation focused on the importance of trust in institutions, while spanning topics including tensions between police and minority communities, disappointment in the lack of fulfillment of President Barack Obama’s campaign promises and the reforms instituted by the Catholic Church following the child sex abuse scandal.

“This in a nutshell is the mission of the Baker Center, one which is both global in scale and simple in its construct — to tackle some of society’s most intractable challenges, and doing so in a way that brings everyone to the table in a constructive civil discourse that helps restore some of the faith that has been lost in our core institutions,” Montgomery said.

Institute of Politics and Public Service Executive Director Mo Elleithee
(SFS ’94), who introduced the panelists, said the country is at a crossroads, now more than ever, as the public grapples with its own distrust of key institutions.

“There’s this palpable national moment we’re all in, and we see it playing out in our TV screens and our neighborhoods. No one trusts anyone,” Elleithee said.

Rawlings-Blake, who ascended to Baltimore’s mayoral office in 2010 when her predecessor Sheila Dixon resigned after being convicted of felony theft, addressed the reforms she implemented to combat the local government’s tarnished reputation.

However, she contended the specter of distrust continues to loom large over her administration, especially following the violence that ensued in response to after the death of Freddie Gray under the custody of the Baltimore Police Department in 2015 during her term as mayor.

“I can say that there has been a significant disconnect between the police force and the community for a significant number of reasons,” Rawlings-Blake said. “I think it’s easy to see it as somebody else’s problem. I think what happened with Freddie Gray made it clear to many people that what happened wasn’t just my problem, it wasn’t just the government’s problem, it was a real problem we had to address.”

As the director of the Initiative on Catholic Social Thought and Public Life, Carr discussed the reputation of the Catholic Church and how it is still recuperating from allegations of child sexual abuse from priests, new measures to provide background checks and training procedures for the clergy have contributed to alleviating public distrust from the scandal. Still, Carr said the ascension of Pope Francis has had the largest impact on the level of public trust in the Catholic Church.

“We’ve become the poster child for betrayed trust to an eventual renewed trust, because at least at the global level we have a new leader with very different priorities who is focused on the poor and the vulnerable and not the institutions,” Carr said. “He leads by his words, by his example and by his faith.”

Jaconi, the vice president and executive editor of the Independent Journal Review, highlighted the paradoxical nature of the public’s surging distrust of the media coinciding with increased social media consumption.

“What I’m still hopeful in is that social media has an ability to show the human side of everything,” Jaconi said. “Any time you can do something to remind people who are reading or consuming your media that you are human, too, is really important.”

Inskeep explained his belief that the tension between objectivity and humanity contributes to the public’s frustrations with the media.

“So many people talk about objectivity in journalism and I don’t believe many people believe in the concept anymore,” Inskeep said. “There used to be the idea of being the voice from nowhere, just giving facts, but I have a voice, I use it, I’m not from nowhere, I’m a guy from Indiana, I’m an American, and I have certain backgrounds, and I still want to tell the truth, and I’m finding a way to tell the truth but acknowledge the fact that we’re human beings.”

The panelists reached a consensus that demographic patterns, including the growth of the minority community in the coming century and the advent of the millennial generation, will shape the public’s faith in their institutions.

Shah, who now serves as the executive director of the Beeck Center for Social Impact and Innovation, stressed the potential of millennials in reversing attitudes toward the American establishment.

“I don’t know if millennials are any better, but I think they have an opportunity to rewrite the world,” Shah said.

In the event’s closing remarks, Baker urged students to engage with the problem of mounting public distrust rather than depend on institutions to resolve the issue.

“The essence is that it’s important that we do something, so in that context, it’s the students, it’s the young people in the room, it’s you who have to get in the game, you have to want it, you have to commit to a difference,” Baker said. “To me, institutions are not the solution. There’s been a breakdown of institutions.”

Omar Torres (COL ’18) said he gained a renewed faith in institutions after hearing about the mission of the Baker Center.

“In the election, you hear from both sides that government is not trustworthy, that we need to make America great again or something like that,” Torres said. “But at the same time there are institutions that have the purpose of working for the people and if there’s something that I’m taking out of the discussion it’s that there’s hope in how they work and that there’s ways in which to make it more trustworthy for the people.”