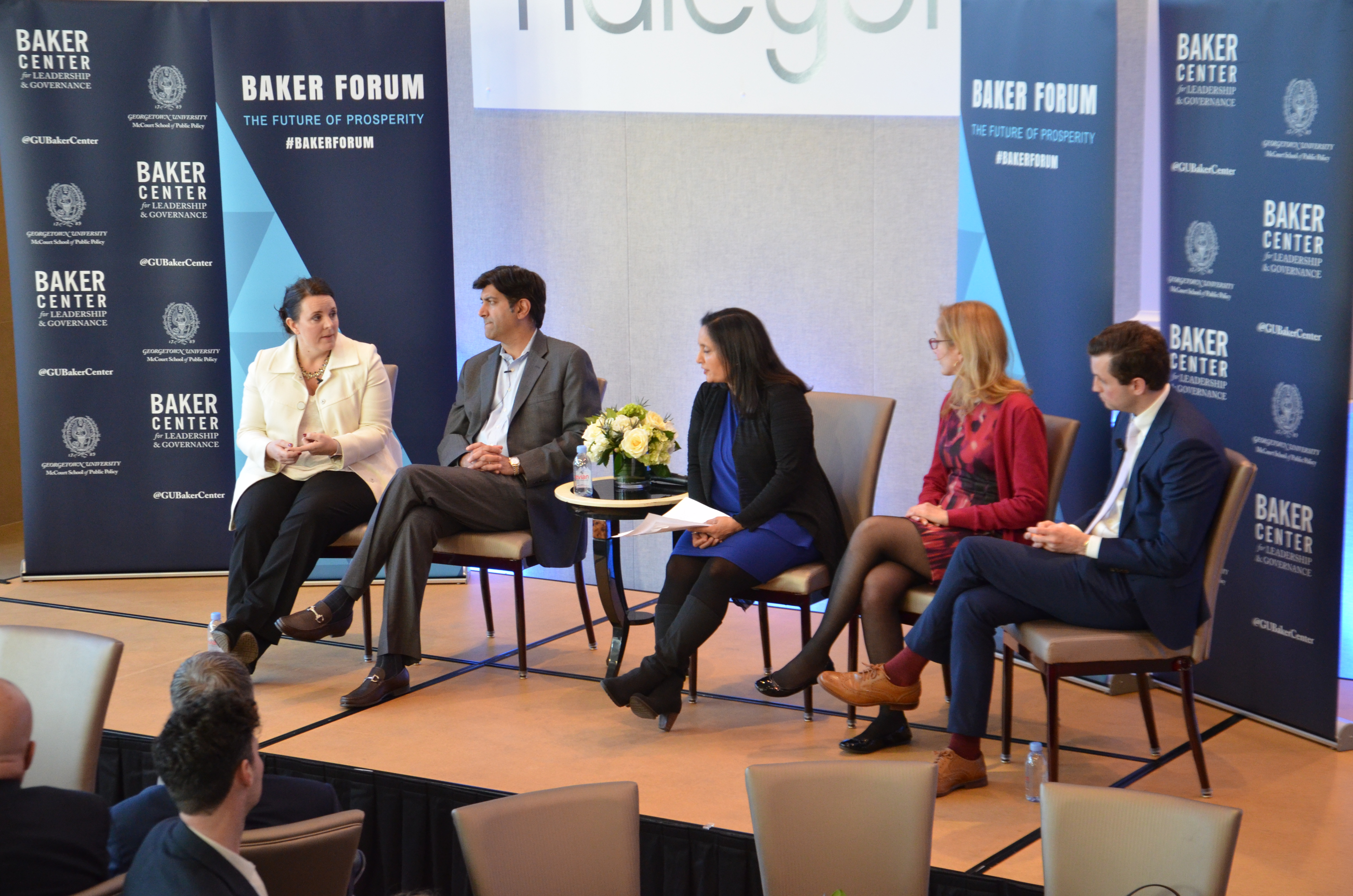 Georgetown Institute of Politics and Public Service Executive Director Mo Elleithee revealed the grant halfway through the forum, the culmination of the year-old Georgetown University Baker Center for Leadership and Governance’s set of programming focused on increasing shared prosperity and recapturing the “American Dream.”

The daylong event featured business leaders from both the private and public sectors and addressed on the topic “The Future of Prosperity.”

Over 100 individuals attended the event, which took place at the historic Halcyon House on Prospect Street.

During the first half of the forum, five panelists discussed disruption and innovation in a changing economy, engaging in a conversation that touched on the impending automation of American jobs. Conroy highlighted that about one-third of the total job supply will be automated in 30 years.

Harris said that even though government is often seen as a solution to major problems, the current era is all about decentralization.

She added that entrepreneurs could often provide better bottom-up solutions to problems than governments.

Chopra saw opportunity for more shared prosperity in the increased dissemination of information to employees for improved career decision-making. According to Chopra, the country has missed an important opportunity to equip workers with knowledge about desired skills and expanding job markets.

The panelists also considered that both the private and public sectors have been slow to adapt to changing workforce demands.

This year’s Baker Innovators will be searching for solutions to the new Baker Center theme, “Restoring a Sense of Security.” The innovators’ projects will focus on food security, job and income security, health security and political security.

The innovators will present their findings at next year’s forum. Elleithee suggested that the $20,000 that each innovator will receive would be crucial to furthering their progress.

“They will use that for everything from research to fieldwork to come up with something new and innovative to restore a sense of security,” Elleithee said.

Gutierrez considered that despite the prevalence of the “American Dream,” the current immigration system inhibits foreigners from reaching it.

Gutierrez called for immigration policy reform that allows for more workers to enter the American economy while pushing back at the notion that immigrants take American jobs.

“If we don’t change the law that enables people to come in legally, then we’re going to be in deep trouble,” Guitierrez said. “Building a wall is not a strategy. The strategy is: what is the immigration law so that people can come in legally.”

Angela Manso (GRD ’03), an employee at the Department of State, said she appreciated the remarks of Gutierrez, whose career she has followed over the years.

“There’s certainly room for agreement with what he stated,” Manso said. “My hope is that it does begin a conversation about these very important thing. I was interested in the issues. It’s very timely. They were timely 10 years ago, they’re timely now.”

Looking forward toward next year’s round of programming, Elleithee hopes to see partnerships with more sectors of society.

“As we move forward, we are looking to bring in leaders from different institutions like media, like the non-profit side or like the faith community to be part of conversations moving forward,” Elleithee said.

Elleithee said he thinks enabling conversations among citizens of different backgrounds is a unique feature of the Baker Forum.

“There is a very healthy appetite to bring together different perspectives in a civil conversation, which is too often lacking in our society or too siloed,” Elleithee said. “Being able to break through some of the barriers that prevent civil discourse is going to be key.”