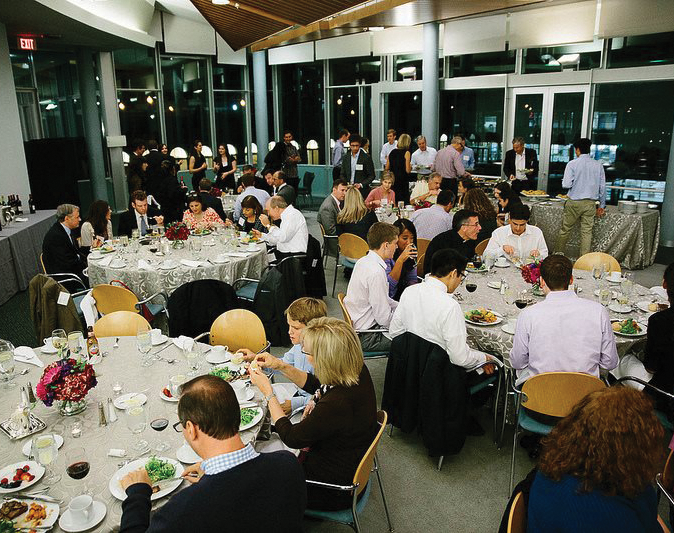 Each spring, 10 sophomores in the College with an interest in business are accepted as the new crop of Baker Scholars. Last month, 80 of these scholars from the past 40 years returned to the Hilltop for the program’s 40th anniversary, honoring the late Fr. Roy Davis, S.J., who brought the program to the university and fostered its growth. The Baker Scholars Program was founded in 1973 by the family of the late George F. Baker, a banker and philanthropist. The program was implemented at many universities around the country, but the only two programs that remain are at Georgetown and Harvard Business School. The program has evolved over the years at Georgetown while remaining true to its core values and goals, Program Coordinator Elyse Tadich said. “The biggest change is that it’s much more structured now. It used to be a little bit more informal,” she said. “I think a lot of the structure that has been put in place increases accountability, gives the scholars in the program an opportunity to do more, so it really is a student-led group, and plan really excellent things.” “The core values definitely remain the same,” she added. “It was always liberal arts students who were doing very well academically. [Baker] wanted them to be leaders for others, very much under that Jesuit ideal with the service component that is very much there today.” The anniversary weekend consisted of events such as a film about the creation of the program and classes for scholars and alumni that addressed topics such as “Business Entrepreneurship” and “Integrating Service and Ethics Into Our Lives.” The 80 attending scholars and alumni also got the chance to reconnect and network with one another. “For me, it was very special how welcoming everyone was,” Baker alumna Erin Ruane (CAS ’87) said. “I was very impressed meeting the young scholars. Honestly, it’s just a community of a group of smart, socially conscious, kind and warm people, and it was fabulous to be able to reconnect and spend the time with them.” Current Baker Scholars also took part in the activities of the weekend and reflected on its growth. “It was incredible to see a gathering of alums from throughout the program’s history, both to see how the program has evolved from what it was when Fr. Davis started it to where it is now and to hear that there are, even despite the evolution, common stories and feelings that people have had in the program and because of the program throughout the 40 years,” Hilary Cohen (COL ’14), a current Baker Scholar, said. Baker Scholars enrolled in Georgetown College receive two formal mentors from the Baker board of trustees to provide them with guidance and support throughout their two years in the program. The scholars also have access to a network of more than 300 Baker alumni. “It’s opened up a personal and professional network that I otherwise wouldn’t have access to,” Tyler Jennings (COL ’14) said. “It’s a group of established people … that really not only serve as people you can go to for advice but mentors in every aspect of your life, whether that be academically, professionally or personally.” The groups connect with each other through phone calls, meetings and reunions such as this weekend. “The absolute best thing for me as a dean of the program is to witness the interaction between the scholars and the trustees,” College Senior Associate Dean Thomas Chiarolanzio said. “The mentorship that goes on between the trustees and the scholars, and the scholars’ development over the two years of their interest in business is just fascinating and very rewarding.” Another main goal of the program is a commitment to service and ethical business. The group takes part in community service each year to foster its commitment to becoming socially conscious business leaders. “Being successful in business isn’t just about being smart and having the right answers,” Ruane said. “It’s about being able to communicate your ideas, being able to respond on the fly and also being a socially conscious person who is focused, determined and competitive in business. They can be hand in hand, and that’s what the Baker Program is about.” According to scholars, the program has helped prepare them for a future career in the business world. Isaac Freedman (COL ’14) is working on Wall Street next year and said that connections made through the program helped him make decisions about his future. “There are a lot of Baker Scholars at the large investment banks, so the Baker program has provided me the opportunity to reach out to any of these people at any time of the day,” Freedman said. “They’re more than happy to give me some of their time to share their experience in banking, and any tip that they have for the interview process and to walk me through what my potential career would be if I chose to go down that path.”