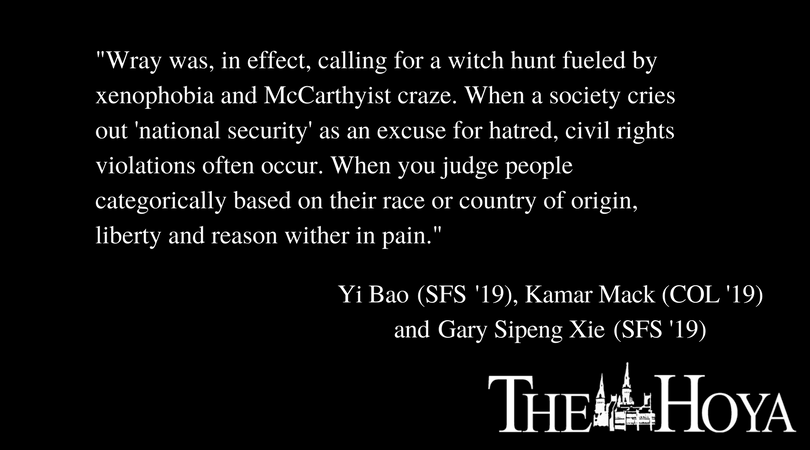 Wray’s xenophobia, fearmongering and discrimination run counter to Georgetown’s values of inclusion, respect and intercultural understanding. We implore DeGioia to share his thoughts in the form of a universitywide message on this event that caused great stress and fear in many of our lives, in the same way he has always condemned racially targeted discrimination against other minority groups.

On Feb. 13, Wray claimed China’s “use of nontraditional collectors, especially in the academic setting — whether it’s professors, scientists, students,” is visible in almost every FBI field office around the country.

We did not completely understand what he meant by a whole-of-society response. But if he meant mobilization of one part of society against the other, we have deep reasons to fear. Wray’s statement turned us into potential suspects and our friends, roommates and professors into suspicious onlookers.

This paranoia is not new.

During World War II, when Americans launched whole-of-society responses against Japanese-Americans, they called them spies and sent them to internment camps. This moment was one of the darkest in U.S. history. We must be cautious of calls to mobilize society against a specific ethnic group.

Wray was, in effect, calling for a witch hunt fueled by xenophobia and McCarthyist craze. When a society cries out “national security” as an excuse for hatred, civil rights violations often occur. When you judge people categorically based on their race or country of origin, liberty and reason wither in pain.

This problem does not only affect Chinese students. No matter your race, origin or how long you have lived in America, if you look different, you are a target.

DeGioia has been a champion of minorities at Georgetown, and we hope he continues to play that role for Chinese students.

When the Muslim travel ban terrorized our Muslim students, DeGioia made a statement to the student body Jan. 29, 2017: “We recognize the invaluable role that our Muslim and international students, scholars, staff, and faculty play—and the importance of protecting the ability of all members of our community to freely practice their religion.”

These words of inclusivity warmed our hearts and gave us courage.

When the Trump administration launched its attack on the Deferred Action for Childhood Arrivals program, DeGioia made a statement to the student body Sept. 5, 2017: “We have the capacity, and responsibility, as a nation to provide a permanent legislative solution to support our undocumented students.”

These words of hope warmed our hearts and gave us courage.

When hatred descended on our Jewish population and a swastika was found during Rosh Hashanah, DeGioia made a statement to the student body Sep. 20, 2017: “We stand in solidarity with our Jewish community and strongly condemn this act of hate, anti-Semitism, and sexism.”

These words of solidarity warmed our hearts and gave us courage.

These words of justice warmed our hearts and gave us courage.

This time, the barrel of injustice is pressed against the head of the Chinese students. Just like the words of Fr. Arrupe he quoted, DeGioia must not merely refrain from injustice. He must accept responsibility and take care of his students. He must respond.