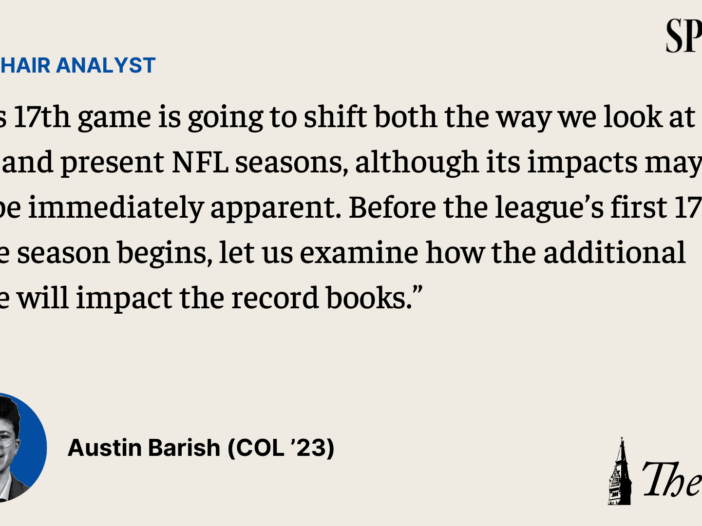 As sports fans, few things are more exciting than debating the dominance of players throughout different eras of the game. Whether it be the classic debate of Michael Jordan versus LeBron James, or an argument over whether or not Tom Brady is truly the greatest of all time NFL quarterback, these discussions can rage for hours on television, across social media and in school cafeterias.

NBA fans are all too familiar with this problem. Attempting to compare players and teams from before the addition of the 3-point line in 1980 to the players today is almost impossible. There are also the myriad differences in the league that have come about since hand-checking was banned in 2004, a subject many older fans lament.

Recently, the NFL has made two decisions that will similarly distort cross-era football discussions. Last season, the NFL made the historic decision to add a seventh playoff slot in each conference. The following March, the NFL went on to add a 17th game to the regular season. This is extremely significant, as the NFL had not extended the season since 1978, when it expanded from 14 to 16 games.

This 17th game is going to shift both the way we look at past and present NFL seasons, although its impacts may not be immediately apparent. Before the league’s first 17-game season begins, let us examine how the additional game will impact the record books.

To start, numerous records from 16-game seasons are going to be broken, like Derrick Henry’s 2,027-yard rush in 2020, the fifth-highest in NFL history. With an extra game, assuming that Henry continued at his pace of 126.7 yards per game, he would have passed Eric Dickerson’s 1984 record by a whole 50 yards. If records like Dickerson’s are broken by such a narrow margin, fans will have a harder time debating an individual’s GOAT status. They will also have to live with the fact that we may never know if anyone could have broken Dickerson’s 16-game record.

Beyond single-season records, the career record books will increasingly be filled by modern players who will routinely outpace their historic counterparts. Players who will compete in a 17-game season as opposed to a 16-game season should expect to leapfrog in rankings. Young greats such as Kansas City’s Patrick Mahomes now have the increased chance of sitting atop the record books when they ultimately hang up their cleats.

It will also become far easier for players to hit the benchmarks fans use to judge a season’s success. One thousand yards rushing or receiving used to be a reliable indicator of a prolific year for an offensive skill position player, and typically there are about 20 1,000-yard receivers in an NFL season. To reach 1,000 yards in a 17-game season, players only need to maintain the per game averages of what used to be a 941-yard season, a minor difference that would have added nine players to the 1,000-yard threshold in 2020. Inevitably, new thresholds for what is considered an outstanding season will have to be established.

More intriguing are the historic thresholds of 5,000 passing yards, of which there have been 12 in NFL history. To reach 5,000 yards passing in a 17-game season, a quarterback now only needs to average 294 yards per game, or what would have been 4,706 yards in a 16-game season. There have been a whopping 38 seasons in which a quarterback has passed for more than 4,706 yards. In the upcoming season and beyond, hitting 5,000 yards will be less and less historic. Last season alone, there would have been two quarterbacks, Deshaun Watson and Patrick Mahomes, to reach this milestone.

The even more exclusive 2,000-yard rushing club will also welcome an increasing number of members. Just eight players have ever rushed for more than 2,000 yards in a season. Now, rushers will only need to maintain 117.6 yards per game needed to reach 2,000 yards. Had the NFL always played 17 games, the number of 2,000-yard rushers would have increased by 50%.

Comparing current seasons with past ones will inevitably be an imperfect endeavour, but as responsible fans, we ought to consider as much statistical context as we can.