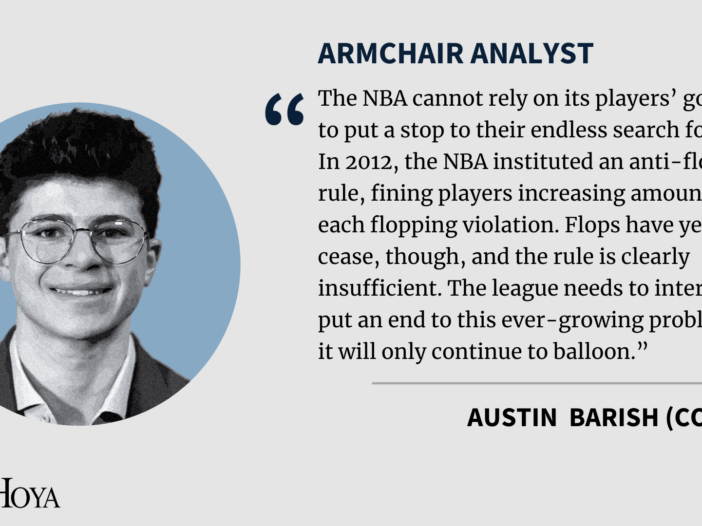 The NBA has become less physical as it has aged, but the league has a growing problem of players seeking fouls instead of playing actual basketball. The increasing search for free throws is ruining the product of the NBA, and the league needs to put an end to it.

Flopping is not a problem unique to basketball, but it is deciding some of the NBA’s biggest games. On Feb. 21, the Los Angeles Clippers and Brooklyn Nets squared off in a primetime matchup. After a thrilling and tightly contested game, the Clippers found themselves down by two points with just seconds left to play. Clippers’ forward Kawhi Leonard got the ball, guarded by Nets guard James Harden.

With two of the best players in the league squaring off and the game on the line, this moment should have been one of the best plays of the season. But Leonard drove the lane and, rather than attempting to play defense, Harden flailed wildly and drew a foul on Leornard, securing a Nets victory by conceding a free throw.

Harden’s flop is just one of countless examples of NBA players choosing to hunt for the referee’s intervention rather than actually playing the game. As such, they become too reliant on the referees. Just as Harden’s flop ruined a great game, these plays steal the joy of watching basketball; no one turns on a basketball game because they want to watch free throws.

The origins of this trend can arguably be attributed to future Hall of Famer Dwyane Wade. Wade popularized a move in which he would pump-fake a shot and get his defender to jump in the air to contest the shot. Rather than driving to the basket or attempting to take advantage of the airborne defender in another way, Wade would jump directly into the defender and throw the ball at the hoop, earning a whistle and free throws.

When performing this move, Wade had no intention of actually making the shot and simply shot with hopes of getting to the free-throw line. Wade’s trick was quickly adopted throughout the league and is commonplace today.

This act of more subtle striving for free throws has only mutated in the years since its inception, becoming more blatant by the day. Harden may be one of the best players in NBA history at drawing fouls, leading the league in free throws attempted every year from 2015 to 2020. As one of the most prolific scorers in NBA history, Harden does not need free throws to score. However, he constantly finds ways to get to the free-throw line by jumping into defenders, swiping his arms through defenders outstretched arms and flopping over and over again.

Harden’s antics even reached a point at which players began guarding him from behind, something that looks just as absurd as it sounds.

The 2021 season has taken this madness to new heights. Players have found new, nonsensical ways to draw contact.

Atlanta Hawks guard Trae Young, who is capable of creating some electrifying highlights, has become borderline unwatchable because of his efforts to draw fouls. Young will drive to the basket and get his defender behind him. In this position, if Young was playing any normal version of basketball, he would be in a prime position to continue to drive towards the basket and either shoot an easy floater or pass the ball off for an assist. Instead, Young jumps backward into the trailing defender, throwing a lazy shot up and walking to the free-throw line.

In December, after Young drew one of these fouls, Nets coach and two-time MVP Steve Nash could be made out on the sidelines yelling, “That’s not basketball!”

Nash is right; it is not basketball. It is an embarrassment.

Players like Young should be humiliated by how they play the game of basketball. Jumping into defenders only seeking a foul is a shameless way of abusing the referees’ loose whistles in the NBA, and it needs to stop.

Some players have grown to be self-aware of how much they rely on the referees. Dallas Mavericks guard Luka Dončić recently admitted he has to stop complaining to the referees, stating he knows “it’s not right.”

The NBA cannot rely on its players’ goodwill to put a stop to their endless search for fouls. In 2012, the NBA instituted an anti-flopping rule, fining players increasing amounts for each flopping violation. Flops have yet to cease, though, and the rule is clearly insufficient. The league needs to intervene to put an end to this ever-growing problem or it will only continue to balloon. The NBA could look to rework its fines to further disincentive flopping, but there is nothing to suggest this will work any better than last time.

As these flops and ill-advised shots go from whistles and free throws to bad defense and bricks — exactly what they are — players will be forced to adapt their style of play to match the revised rules. In fact, there is already a clear standard the referees can follow. It is commonly known referees are more hesitant to call fouls in the playoffs.

There is no reason the playoff standards of a foul cannot be at least somewhat adopted during the regular season and put an end to this maddening phenomenon.

Austin Barish is a sophomore in the College. The Armchair Analyst appears online every other week.