A couple weekends ago, Jordan Spieth capped a remarkable season by capturing the FedEx Cup. That win served as the final push to help Spieth win the title of Player of the Year on Friday. Spieth’s play this year exceeded expectations and grabbed the attention of many golf enthusiasts and casual sports fans.

Up until this year, the golf world lacked a true star to help market the sport. Tiger Woods’ Thanksgiving accident made his personal life a media firestorm. From there, his career entered a spiral, and his pursuit of Jack Nicklaus’ record number of major championships appears fruitless.

Rory McIlroy possessed the potential to follow in Woods’ footsteps, but his shoes were just too big to fill. Injuries and inconsistent play differentiate McIlroy from Woods.

Spieth, having won two majors and earning the world’s number one ranking, possesses the potential to match what Woods did for golf.

For years, Tiger Woods ran the sport of golf. Most major league sports name their video games after their league, with the exception of the NFL’s “Madden” series. Even then, John Madden retired years before the release of the game.

Woods, in the prime of his career, managed to get his face and name on the front of every golf video game. No one could talk about golf without discussing Tiger Woods in some capacity.

Frankly, no one can replicate what Tiger Woods did for golf, for better or worse. His legacy, mixed with great moments and off-thecourse issues, continually lingers over the sport. The 2014 Masters saw its lowest television ratings since 1993. Golf fans keep waiting for the next amazing talent to emerge in the sport, but the standard Woods set seemed like it might be too high for any player to reach.

Enter Jordan Spieth. The 22-year-old made some noise on the PGA Tour in his first three seasons as both an amateur and a pro. Still, his performance in the majors was subpar, only finishing in the top 20 once when he tied for second at the 2014 Masters.

Entering this year, few people knew about Spieth. His dominating performance to win this year’s Masters catapulted him — and everyone in his life — to stardom. Thousands of people followed his girlfriend on Twitter, and everything about Spieth’s life came under public scrutiny.

For some, this instant fame would be a terrible thing. Yet, Spieth handles himself with such class to show that his age is no indication of his maturity.

Spieth also uses this newfound platform for his own monetary benefit. Spieth’s endorsement deal with Under Armour looks more and more profitable each day. He not only receives millions of dollars in his contract, but he also holds equity in UA.

Spieth’s success, paired with Steph Curry’s MVP season, made the brand that much more valuable. In the past year alone, a share of Under Armour rose from $68 to $100. With each win, Spieth not only adds to his resume but to his pocket as well.

Of all the great moments that Spieth provides on the course, the most memorable one from his 2015 season came after the third round at the PGA Open Championship in August.

SSAfter 15 holes, Spieth found himself a few spots back on the leaderboard. He needed a few good holes to finish the day if he were to remain in contention for the final round.

Spieth did exactly that, birdieing his last three holes. As he walked off the course, a girl walked up to Spieth and he hugged her tightly.

That girl was Ellie Spieth, Jordan’s 14-year-old sister who was born with a neurological disorder on the autism spectrum. Spieth cited his younger sister as a huge inspiration in his playing career.

Spieth needed to get back to the clubhouse, but instead he waited for a second, hugged his sister for a moment and then went on his way. 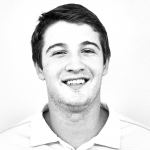 Nick Barton is a junior in the McDonough School of Business. More than a Game appears every other Tuesday.